Links
{{ activeItem() }}
Twitter
01/10/20
Follow @audisport for all of our latest @FIAFormulaE news. We will be closing this @audiformulae team channel after… https://t.co/V4bxTUIkwJ
12/31/19
RT @audisport: Thank you for all of your great support throughout this year! We are wishing you a great start to 2020 - Happy New Year! #P…
12/15/19
RT @audisport: Perfect start: @LucasdiGrassi tells us how to take the start in the Audi e-tron FE06. More on https://t.co/OQuS3W3wCh: &gt;&gt; h…
12/14/19
How do you get going in our Audi e-tron FE06? @LucasdiGrassi explains the perfect start to us on … https://t.co/kIxpV1NB8F
Audi Formula E on Twitter
01/18/20
RT @LucasdiGrassi: 7th place felt like a win after starting practically last! Thanks @audisport team flawless race execution!!! https://t.c…
01/18/20
MEDIAINFO: Audi driver di Grassi thrills with comeback drive &gt;&gt; https://t.co/Wxt55NU07X #PerformanceIsAnAttitude… https://t.co/0hsitJqb9l
01/18/20
Another thrilling #SantiagoEPrix. What a comeback from @LucasdiGrassi: 7th from 22nd on the grid. A strong performa… https://t.co/1vIP9jHFyV
01/18/20
We are just minutes away from going green in Santiago. There is still time to vote for our two drivers! #FANBOOST… https://t.co/cxZL9Q2KGl
Audi Sport on Twitter
{{ activeItem() }}
Facebook
01/18/20
From the back into the points: Lucas Di Grassi finished 7th after starting 22nd, while Daniel Abt dropped from 8th due to a post-race penalty. See you in Mexico City on February 15. >> audi.com/FormulaE #PerformanceIsAnAttitude #SantiagoEPrix
01/17/20
“It’s like the Matrix!” Daniel Abt and Lucas Di Grassi are hunting for treasure in the world of VR before the ABB Formula E Santiago E-Prix. Check it out. >> audi.com/FormulaE #PerformanceIsAnAttitude #SantiagoEPrix
01/15/20
Full speed to the first ABB Formula E race of 2020: the Santiago E-Prix on Saturday, February 18. >> audi.com/FormulaE #PerformanceIsAnAttitude #SantiagoEPrix
01/14/20
Don‘t miss out as Formula E goes full throttle this season. #PerformanceIsAnAttitude
Audi Sport on Facebook 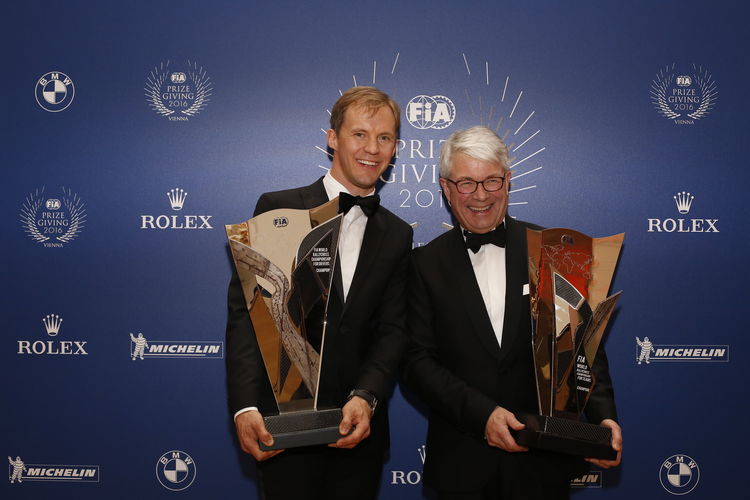 Mattias Ekström received the trophy for his world championship title in the World Rallycross Championship at the FIA prize giving in Vienna. In the Hofburg, the Swede was honored for his achievements this season in front of 800 invited guests. Ekström had already secured the world championship title with his 560 hp Audi S1 EKS RX quattro at the penultimate round of the season hosted at the Estering in Buxtehude. With his private rallycross team EKS, the 38-year-old Audi factory driver also won the team’s title. “I have been following this gala for many, many years as a spectator from afar. Standing on the stage now and being honored twice as a world champion is fantastic,” said Ekström, who is both an EKS driver and the team owner.