Post-race quotes after the Bathurst 12 Hour 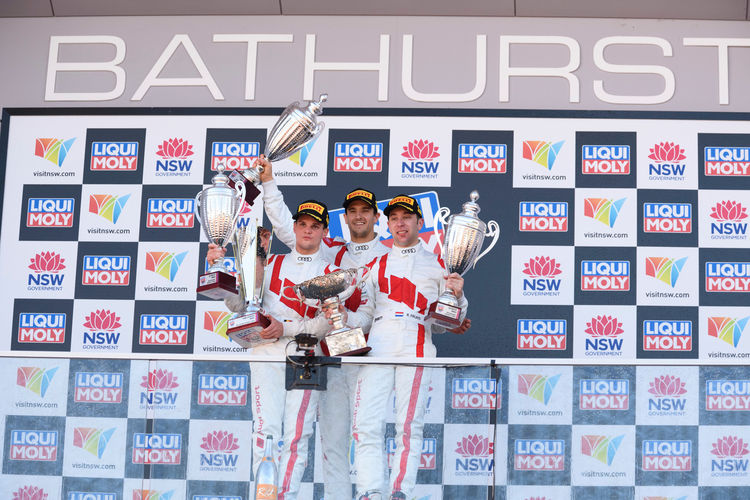 “This was my first race at Bathurst and we instantly won. There’s no doubt in mind that I’ll also enjoy returning to Australia for a vacation some day because the country gave me a very warm welcome. The 12-hour race was awesome. We weren’t sitting in the fastest Audi this weekend, had a few issues, strong rivals and still won in the end. I’m absolutely happy about our victory in this fantastic race. We prevailed against really fierce competition.”

“The weekend was a big surprise for us. Things weren’t going so well in the beginning, but when the crucial race stage came, everything fell into place. For about four hours, our radio communications with the pit lane didn’t work, which was a pretty severe limitation. Especially in the many safety car periods where quick reactions are crucial this resulted in a clear disadvantage for us. At the end of a yellow period, the field fanned out toward the right and left at the restart, but that was forbidden and so I incurred a drive-through penalty. As a result, we had a one-lap deficit. But I was able to overtake my fellow Audi driver Garth Tander and we were back on the leading lap. At the very end, the race became a bit chaotic again due to the safety car period, but the red flag ultimately ended the race just before it was over. That was a sweet start to a season with Audi in which the DTM is part of my program for the first time.”

“I was here at Bathurst for the first time. This fascinating track reminds me of the Nürburgring Nordschleife. The race weekend was pretty crazy. There were repeated setbacks, but we never gave up, even when we were one lap behind. A really big thank you to Robin Frijns. He saved our victory with his strong lap times. Especially the last two and a half hours were incredible. Now I’ve achieved my third big endurance racing victory with Audi and Vincent Vosse’s team since 2015 following a 12-hour success at Sepang and a 24-hour victory in Dubai. I’m over the moon.”