{{ activeItem() }}
Twitter
01/24/20
Into the night during the third free practice session, P6 in the GTD class for the WRT Speedstar Audi Sport team. T… https://t.co/IzA6SQ0q2G
01/24/20
“This is a long race, a 24-hour race that is coming for us. So, the position here in qualifying isn't everything.”… https://t.co/SsxcohKVNc
01/23/20
The 15-minute GTD class qualifying session for the @Rolex24Hours at @DISupdates will begin at 22:15 CET. Follow liv… https://t.co/0bwMYTcugn
01/23/20
P1 and P10 in the GTD class in the first two @Rolex24Hours practice sessions respectively. Rolf Ineichen will be be… https://t.co/GmSmKwC8PZ
Audi Sport on Twitter
{{ activeItem() }}
Facebook
01/22/20
Endurance racing coming up at Daytona this week: 24 hours for the Audi R8 LMS during the weekend and 4 hours for the Audi R8 LMS GT4 and Audi RS 3 LMS on Friday. >> audi.com/GT3 >> audi.com/GT4 >> audi.com/TCR #PerformanceIsAnAttitude #Rolex24
01/18/20
From the back into the points: Lucas Di Grassi finished 7th after starting 22nd, while Daniel Abt dropped from 8th due to a post-race penalty. See you in Mexico City on February 15. >> audi.com/FormulaE #PerformanceIsAnAttitude #SantiagoEPrix
01/17/20
“It’s like the Matrix!” Daniel Abt and Lucas Di Grassi are hunting for treasure in the world of VR before the ABB Formula E Santiago E-Prix. Check it out. >> audi.com/FormulaE #PerformanceIsAnAttitude #SantiagoEPrix
01/15/20
Full speed to the first ABB Formula E race of 2020: the Santiago E-Prix on Saturday, February 18. >> audi.com/FormulaE #PerformanceIsAnAttitude #SantiagoEPrix
Audi Sport on Facebook 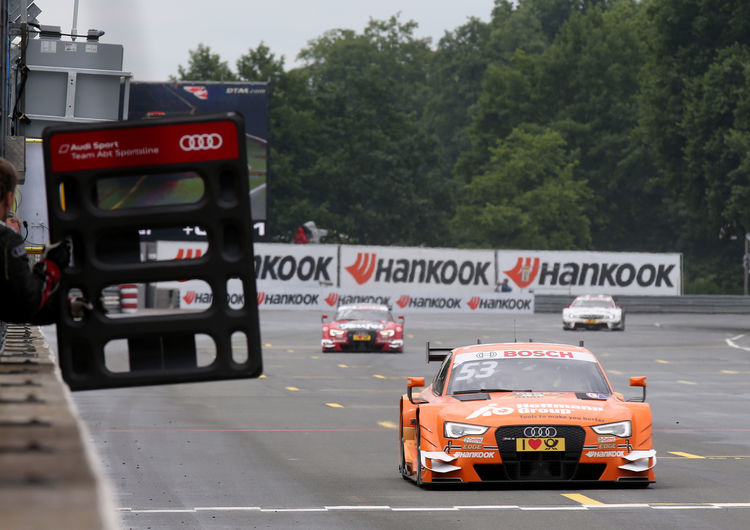 Leader of the standings Jamie Green was the best Audi driver in the first qualifying session on the third DTM race weekend at the Norisring. The Briton from Audi Sport Team Rosberg in the Hoffmann Group Audi RS 5 DTM with his lap time of 50.687 seconds took third place. On a drying track, Green in the end was 47 thousandths of a second short of Christian Vietoris’ best time. The field had initially started on rain tires, followed by the drivers successively switching to slicks. Consequently, the positions kept changing within seconds.

With this result, Audi has been beaten in a DTM qualifying session for the first time in 274 days. Since the race at Zandvoort in September 2014, Audi drivers had continually been clinching the top spot on the grid – at the two final events last year, as well as in the four qualifying sessions on the first two race weekends in 2015.

“I owe third place on the grid to my engineer,” said Jamie Green. “We opted for slicks precisely at the right time. The last lap was good. And that’s exactly what counted in order to move far to the front on the grid.”

Miguel Molina was another Audi driver to manage the leap into the top ten. The Spaniard in the Teufel Audi RS 5 DTM set a lap time of 51.069 seconds that put him in position nine. The first race at the Norisring will start at 16.48 CEST.