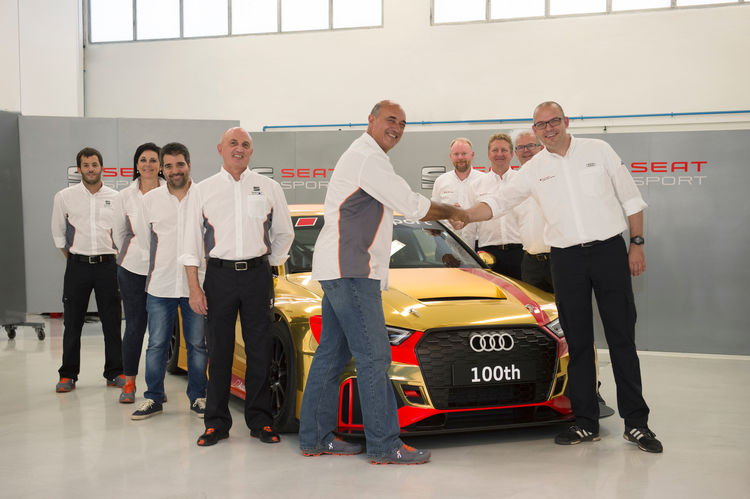 Presented in September 2016, the Audi RS 3 LMS is not yet one year old but it is already celebrating its first great production milestone. In July, Audi Sport customer racing produced the 100th example of the 350 hp race car within the group. The group has combined the assembly of all TCR race cars of its brands at the Martorell site in Spain. Junior racing driver Joonas Lappalainen steered the golden-painted celebratory model across the stage at the first Audi Summit Brand Show in Barcelona. On the following day, the management team of the customer racing program from Audi Sport visited the employees of the racing department at Martorell. Chris Reinke, Head of Audi Sport customer racing: “In just its debut season, we have already delivered 90 examples of our race car to customers around the world and have received preorders up to the 100th model. We’re proud that our entry model for touring car racing has gone down so well and that it is already such an important pillar of our model range. My thanks go to our colleagues in Spain for the excellent work in building our race car.” Since January, customer teams have already contested 117 races on three continents – America, Europe and Asia. They have achieved 69 podiums, including 24 victories, at both 12 and 24-hour races, amongst others. The TCR class is a growing international category. So far, 13 series have already been set up worldwide just for those models. In addition, there are six other circuit championships with classes for TCR models, as well as other racing disciplines such as hillclimbs, in which Audi is also present.