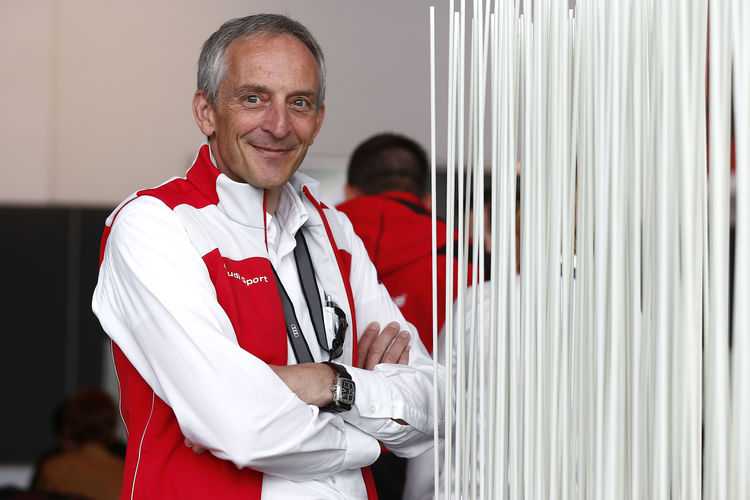 The Head of Audi Sport customer racing about the new Audi R8 LMS.

The Audi R8 LMS saw its world debut at the same time as the production model in early March. This weekend it was driven in public for the first time, at the Nürburgring. Are you proud of the latest racing model of quattro GmbH?

Needless to say we were particularly pleased to see a new production sports car and the corresponding race car being simultaneously unveiled at Audi, and at as important an exhibition as the Geneva Motor Show at that. There were also many inquisitive looks and keen interest when we were on track with the new R8 LMS in the VLN Test and Set-up Session on the Nürburgring.

The public attention is a nice reward for what has been achieved so far. But there is something else that your squad is currently focused on – a huge workload.

Since the development began in 2013 we have already done a lot of valuable work, reeling off tens of thousands of test kilometers and many test bench runs. The first public run on the Nordschleife this weekend was important for our further preparation. We had previously been on the Nürburgring only once and the weather was bad at that time. We’ve now obtained further important findings for optimizing  our a set-up. This should provide a good basis for the VLN Endurance Races on March 28 and April 25. With that, we should be among the first manufacturers to test their new models for 2016 in racing conditions.

What other tasks are on your agenda?

We’re aiming to have developed a fully matured car by the time of the Nürburgring 24 Hours on May 16 and 17 that fits the requirements of the Nordschleife well and will be competitive as soon as possible. In the intervening period there’s still an endurance test on our agenda as well. We’re going to contest further races during the course of the season. The resulting findings will – to the extent this may be
Facebook
Twitter
LinkedIn
WhatsApp
Back to top