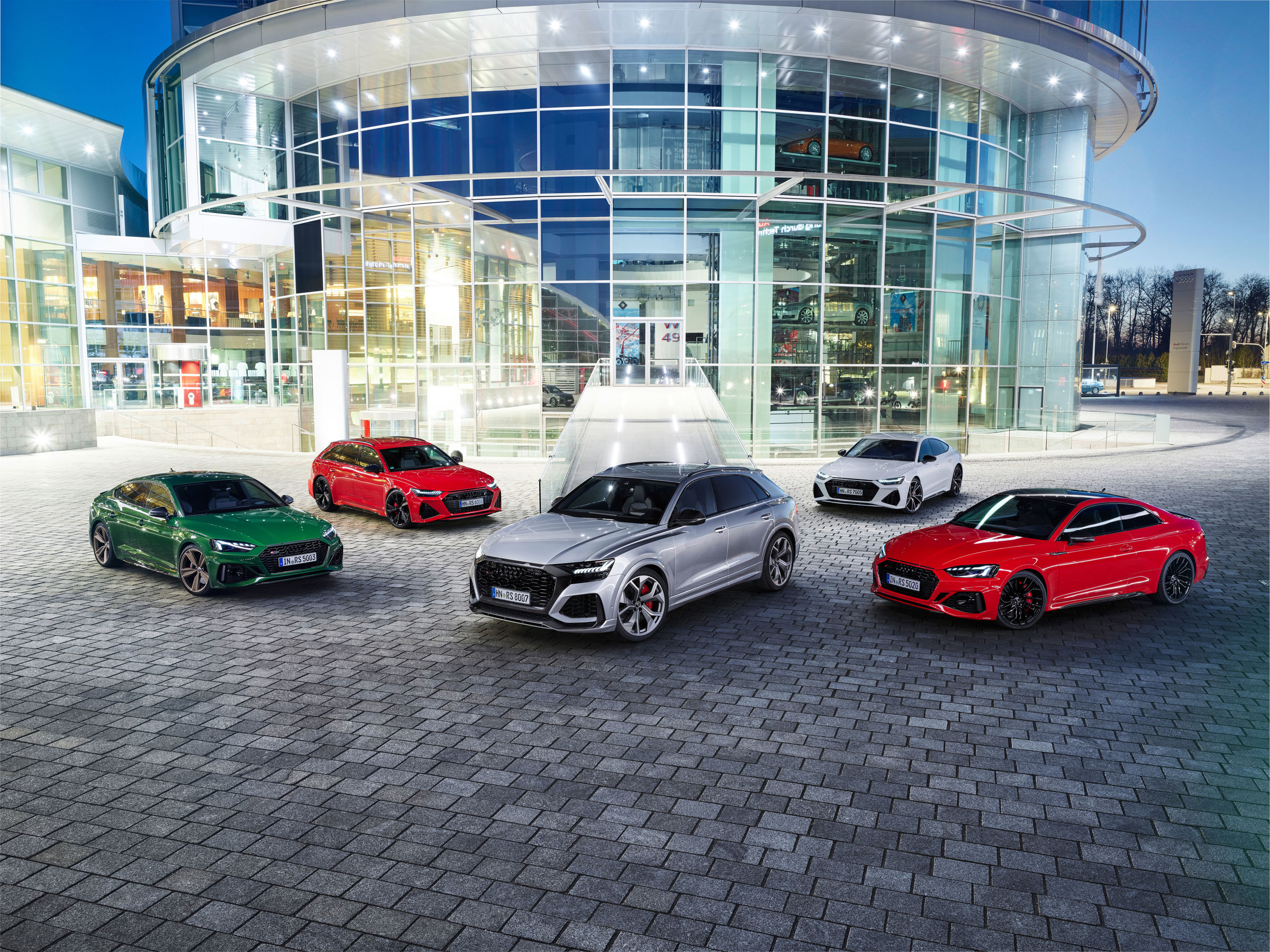 Over 40 years of quattro: the track record and the model range

The quattro has built up an impressive track record over more than 40 years. Through 2020, Audi had produced 11,199,144 cars with all-wheel drive. Some 45.31 percent of all Audi models produced in 2020 were equipped with a quattro drive system – it is a cornerstone of the brand with the four rings. It is available in every model series except the compact A1. All large and particularly powerful vehicle versions, as well as all S and RS models, transfer their horsepower to the road through all four wheels.

With the e-tron* and the e-tron Sportback*, Audi entered not only the age of sustainable electric mobility in 2019 but also the era of electric all-wheel drive. Electric motors drive the front and rear axles in both SUV models. The suspension and drive control units work closely together to regulate the ideal distribution of drive torque between them – continuously, fully variably and within fractions of a second.

At the beginning of 2020, Audi upped the ante with the first expansion stage of the electric all-wheel drive: electric torque vectoring in the Audi e-tron S and the Audi e-tron S Sportback, i.e. shifting the forces between the rear wheels, which are each powered by separate motors. It takes just milliseconds to engage extremely high torque, allowing the car to be driven into curves as energetically as a sports car. Audi is the first manufacturer in the premium segment to mass-produce the technology using three electric motors.

An all-star line-up: the variants of the mechanical quattro drive

The Audi quattro technology is versatile and tailored precisely to suit the specific vehicle concept. One thing that all models do share is the way the system works in concert with wheel-selective torque control – a function of Electronic Stabilization Control (ESC) that assists handling at the limits of adhesion by gently applying the brakes at appropriate moments.

There are two technologies available for models with longitudinal front-mounted engines, depending on transmission. The quattro permanent all-wheel drive, which cooperates with the tiptronic torque-converter automatic transmission, centers on a purely mechanical self-locking center differential. In regular driving, it distributes 40 percent of the torque to the front axle and 60 percent to the rear axle, creating a slight rear bias for a sporty driving style. If necessary, it will transfer up to 70 percent to the front axle or up to 85 percent to the rear.

However, quattro with ultra technology – which has been optimized for efficiency and can be found in Audi models with S tronic or with manual transmissions – uses a dual-clutch arrangement. When the system changes to efficient front-wheel drive, the front clutch – a multi-plate clutch at the transmission output – disconnects the propshaft. An integrated decoupling clutch also opens in the rear differential. This shuts down the primary cause of drag losses in the rear section of the drivetrain. The all-wheel drive system’s intelligent control works predictively, always looking ahead via a comprehensive array of sensors and continuous analysis of the data on driving dynamics, the road condition, and driver behavior. The quattro all-wheel drive system is thus always ready when needed. Drivers will not notice any differences in terms of traction and handling compared with permanent systems.

The compact Audi models with transverse engines use their own quattro drivetrain. At its core is a hydraulic multi-plate clutch that sits on the rear axle for better weight distribution. This is managed so dynamically that it can transfer some of the torque from the front axle to the rear as soon as the car starts to turn in to a corner. There is also a multi-plate clutch in the R8, a mid-engined high-performance sports car. In this case, it is mounted on the front axle. When necessary, it transfers the torque from the rear wheels to the front wheels steplessly.

Over 40 years of quattro: the milestones

When the Audi quattro first appeared at the Geneva Motor Show in 1980, it introduced a means of transmitting power that was entirely new in the passenger car sector – an all-wheel drive system that was lightweight, compact, efficient and low-tension. This made the quattro concept particularly suited to fast, sporty cars and high-volume production right from the outset.

The 147 kW (200 PS) original quattro remained part of the product range as a standard model until 1991 and underwent several technical revisions. In 1984, Audi added the exclusive “short” Sport quattro with an output of 225 kW (306 PS). With the introduction of the Audi 80 quattro in 1986, the center differential that could be locked only manually until then was replaced with the first self-locking center differential. It provided purely mechanical distribution of the drive torque between the front and rear axles at a 50:50 ratio. Under load, it transferred up to 75 percent to the axle with better traction as needed.

The brand continued to refine its quattro technology in subsequent years. The Audi A6 2.5 TDI, the first diesel with permanent all-wheel drive, was launched in 1995. In 1999, quattro technology in the form of an electro-hydraulic multi-plate clutch was introduced in the A3 and TT model series and thus in the compact segment with transverse engine configurations. The next big step came in 2005 with the center differential with asymmetric, dynamic 40:60 power distribution between the front and rear axles. When the first Audi R8 was introduced in 2007, a viscous coupling appeared on the front axle, followed a year later by the rear axle sport differential. In 2016, the quattro with ultra technology optimized for efficiency was added to the portfolio, and Audi launched the electric all-wheel drive on the market in the e-tron* in 2019.

Over 40 years of quattro: supremacy in motorsports

Audi first entered the World Rally Championship in 1981, and the quattro drive dominated the event just one season later. The Audi team won the manufacturers’ championship in 1982, and Finnish driver Hannu Mikkola secured the drivers’ trophy in 1983. Audi took both titles in 1984, with Stig Blomqvist of Sweden becoming world champion. That year, Audi fielded its Sport quattro with a short wheelbase for the first time, followed in 1985 by the Sport quattro S1 producing 350 kW (476 PS). In 1987, Walter Röhrl drove a specially modified S1 to victory at the Pikes Peak hill climb in the USA – the perfect finishing touch to the exhilarating years of rallying.

An Audi all-wheel drive race car – the Audi R18 e-tron quattro with a hybrid drive – once again took to the track in 2012. A V6‑TDI powered the rear wheels, while a flywheel accumulator supplied recuperated energy to two electric motors on the front axle. The car used a temporary quattro drive system during acceleration. It boasted a formidable track record, with three overall victories at the 24 Hours of Le Mans and two drivers’ and manufacturers’ titles in the World Endurance Championship (WEC).

quattro is an icon. The name represents safe driving and sportiness, technical expertise and peak performance in the competitive environment – in short, Vorsprung durch Technik. The success of quattro models on the road and in racing has cemented this status, as has a series of legendary TV commercials and advertising campaigns.

In 1986, professional rally driver Harald Demuth drove an Audi 100 CS quattro up the Kaipola ski jump in Finland. In 2005, Audi repeated this event with an S6 on the same ski jump, which was restored specially. Circuit and rallycross champion Mattias Ekström (Sweden) performed a similar feat in 2019: He tackled the steepest uphill section of the infamous Streif ski course at Kitzbühel in a technology demonstrator and predecessor to the Audi e-tron S* with three electric motors, negotiating gradients of as much as 85%.