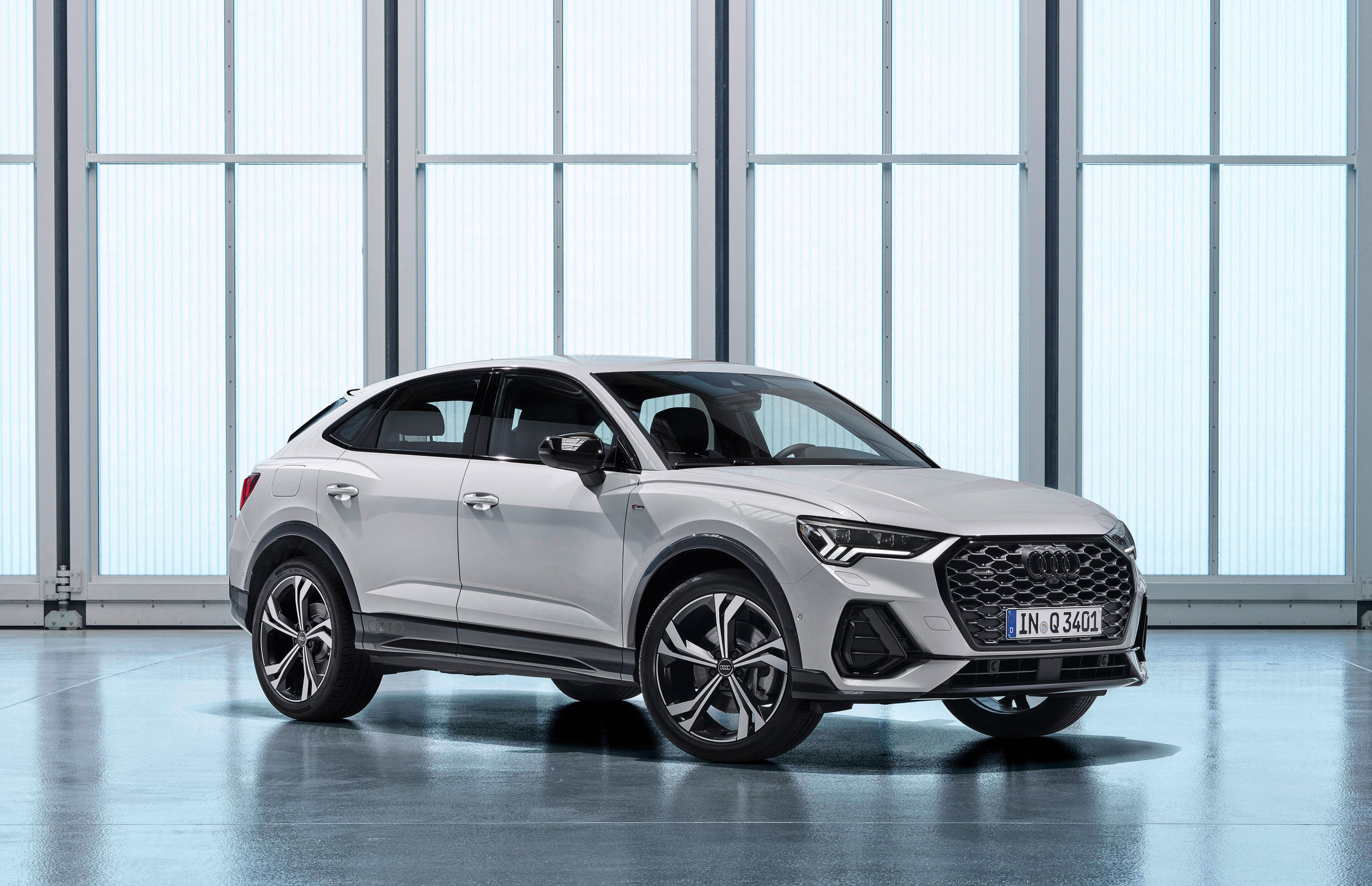 The Audi Q3 Sportback is a car for customers who appreciate technical innovation and a sporty character as much as an expressive design. The compact SUV coupé stands for strength and precision to an equal degree, and reflects this in all design details.

The large octagonal Singleframe that dominates the front end stands out as a prominent feature. It indicates that the sporty newcomer is part of the Q family from Audi. The design of its black grille is markedly three-dimensional and surrounded by a striking silver frame, which makes the vehicle look particularly sporty. The same is true of the trapezoidal air inlets, which are connected to each other by a narrow blade in the bumper. The flat headlights run inwards in a tapered shape and form a point at the outermost edge that integrates the daytime running lights. Audi supplies them in three versions through to Matrix LED technology, whose adaptive high beam intelligently illuminates the road as best suits the driving situation.

The coupé-like passenger cabin forms a contrast to the masculine front end. With its quickly sloping roofline, it makes the all-around performer appear considerably longer than its sister model, the Q3, although the difference is just 16 millimeters (0.6 in). At the same time, the Audi designers positioned the roof frame lower by 29 mm (1.1 in). The flat Dpillars that flow harmonically into the shoulder of the body in combination with the long roof edge spoiler appear to be giving the Q3 ‑Sportback a push even at a standstill. Above the wheels, strong contours hint at the quattro drive, which comes as standard with most engines. The shoulder line that connects them runs slightly lower than on the Q3, thereby lowering the visual focus of the body. Shadowing at the bottom of the door emphasizes the midsection of the SUV coupé and reinforces the athletic character.

The rear with its sporty bumper is every bit as powerful as the front of the Audi Q3 Sportback. Many light and shadow effects arise here in plastic form. Numerous design details emphasize the width of the SUV coupé, including the low window that is flanked by two Aero trims, and the rear lights. The latter take up the contour of the headlights. The shape of the design trims that surround a narrow blade is similar to the air inlets at the front.

From discreet to sporty: the exterior variants

A total of twelve exterior colors are available for the Audi Q3 Sportback, including three plain colors, one pearl effect and eight metallic paint finishes. The latter include the new color, dew silver.

Even with the basic equipment, the attachments in the lower area of the body are painted in the contrasting color Manhattan gray, which reinforces the SUV character of the Audi Q3 Sportback. In the S line exterior, the bumpers, the wheel arch trims, and sill trims are also distinctively colored. On request, the customer can receive these objects painted in the body color. The three-dimensional grille in the Singleframe of the Q3 Sportback S line appears even more prominent with the aluminum elements and emphasizes the vertical character of the Q DNA. The side sills feature silver inserts here. The conspicuous diffuser with four vertical ribs incorporates the implied air outlets like a boomerang and lends the rear even more dynamism. In the S line model, the 215/65 basic tires with 17-inch wheels in the sophisticated 5twin-spoke design are replaced by 18-inch aluminum wheels in a 5-twin-arm design with 235/55 tires.‑ In conjunction with the optional 19- and 20-inch wheels from Audi Sport, the wheel arch trims have been widened by 6.5 millimeters (0.3 in) each. Paint finishes in Turbo blue and Daytona gray are available exclusively for the S line exterior.

Every Audi Q3 Sportback receives the gloss package as standard. This draws extra attention to the roof frame and window slot trims in aluminum, while the B- and C-pillar trims shine in black. The black styling package ensures an even more dynamic appearance because it makes the body appear even sportier thanks to dark surfaces on the bumpers. It also emphasizes the Singleframe and the trim strips on the side windows. In the S line, the insert in the sills is black. As an option, black exterior mirror housings can be added to the package.

Even the basic headlights are designed with LED technology, except for the turn signal. The LED headlights that can implement functions such as cornering, intersection and curve light by moving the low beams are the first option. Three light segments, one long and two short, constitute the signature of the daytime running lights. The rear lights are also designed with LED technology here: Their turn signal operates dynamically. Topping the range are the Matrix LED headlights. Nine LEDs generate the low beam light and ten more LEDs create the high beam light, which precisely and dynamically illuminates the road. When the camera detects other road users, they are masked out of the light beam in a targeted fashion. In addition to numerous differentiated light functions, the matrix LED headlights also feature front and rear dynamic turn signals.