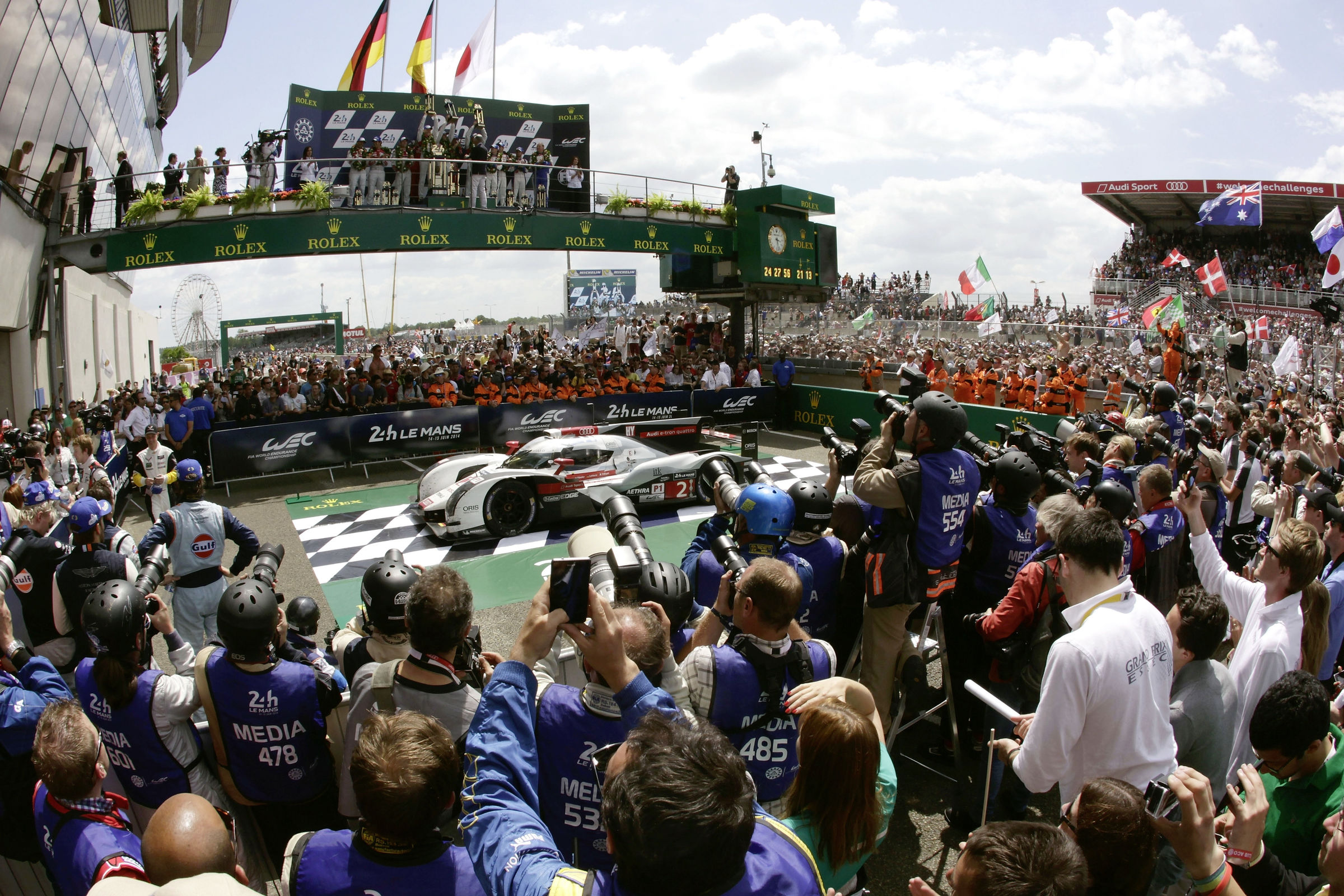 quattro victorious in circuit racing as well
After Audi had turned rally racing upside down and stormed up Pikes Peak (USA) with the Sport quattro in record time on three successive occasions, Audi made quattro drive fit for circuit racing as well: initially with the Audi 200 quattro and the Audi 90 quattro IMSA GTO in the United States, in 1990 and 1991 with two championship titles for the Audi V8 quattro in the German Touring Car Championship (DTM) – and ultimately also with the A4 in the production-based super touring cars. In 1996, the Audi A4 quattro won championship titles in seven countries. Between 2012 and 2016, the all-wheel drive system returned to the race track as the e-tron quattro.

Audi R8 most successful Le Mans sports car in present-day racing
After the dominant quattro drive was banned from touring car racing, Audi switched to sports prototypes and underpinned its slogan “Vorsprung durch Technik” in this motorsport category for 18 years as well. On making its debut at Le Mans, the toughest endurance race in the world, Audi, in 1999, immediately managed the leap onto the podium, in position three. In the following years, the Audi R8 was in a class of its own. From 2000 to 2002, Audi achieved a historic hat-trick, not least thanks to TFSI technology that debuted in 2001 and subsequently made its way into production as well. In 2004 and 2005, customer teams clinched two further overall victories for Audi. The R8 secured its spot in motorsport history with a total of 63 victories in 80 sports car races.

Title wins following the return to DTM
Following Laurent Aiello’s victory with the Abt Audi TT-R in 2002, Audi returned to the DTM with a factory-backed commitment in 2004 and instantly won the title with Mattias Ekström. In 2007, the Swede triumphed again, followed by Timo Scheider in 2008 and 2009 – making Audi the first automobile manufacturer in DTM history to have managed a title hat-trick. Martin Tomczyk completed the success story of the Audi A4 DTM in the 2011 season with another title win – the fifth in total for the Audi A4 DTM. In 2013, Mike Rockenfeller in the Audi RS 5 DTM clinched DTM title number nine for Audi. René Rast caused a sensation in 2017 when he clinched another title for Audi in his rookie year. The new “turbo era” of the DTM in the years 2019 and 2020 then became true Audi festivals: Twice the brand secured the titles in the drivers', team and manufacturers' championship. René Rast crowned himself champion twice more.

Pioneering achievements with TDI technology
With TDI technology Audi achieved a pioneering feat and, at the same time, demonstrated “Vorsprung durch Technik” once again. In 2006, the Audi R10 TDI featuring a new concept was the first sports car with a diesel engine to triumph in the legendary 24 Hours of Le Mans. In total, TDI technology came out winning eight times at Le Mans. In 2007 and 2008, Audi was again victorious with the R10 TDI at La Sarthe. In addition, Audi won the American Le Mans Series with the diesel-powered racing sports cars three times in succession and, in 2008, the European Le Mans Series as well. With the R15 TDI Audi, in 2010, celebrated a one-two-three result in the fastest Le Mans race of all time and set a new distance record that has not been broken to date. In 2011, 2012, 2013 and 2014, Audi TDI power was again victorious at Le Mans. In 2014, the brand celebrated its 13th victory in just 16 participations. Audi demonstrates “Vorsprung durch Technik” in terms of energy efficiency as well. During the entire TDI era, Audi reduced diesel consumption by 46 percent within the space of one decade.

First hybrid winner at Le Mans
On clinching the first victory of a hybrid race car in the 24 Hours of Le Mans in 2012, Audi achieved another pioneering feat in the world’s most important endurance race. Three consecutive times (2012, 2013 und 2014) the Audi R18 e-tron quattro remained unbeaten at Le Mans. Many other innovations such as Audi Laser Light have been added to these pioneering feats in technology. The drivers’ and manufacturers’ titles won with the hybrid sports car in the 2012 and 2013 FIA World Endurance Championship (WEC) complete the track record in Audi’s sports car era that ended in 2016.

Audi Sport customer racing for the customers of the brand
With the R8 LMS, Audi Sport customer racing in 2009 developed a race car specifically for use in customer racing for the first time. The GT3 sports car, more than 50 percent of which consists of production parts, instantly impressed. In March 2015, Audi Sport presented the second generation of the successful GT3 sports car and another evolution for the 2019 season. In total, the GT3 sports cars with the four rings have won a 24-hour race on 13 occasions, eight twelve-hour races, plus more than 80 driver championship titles worldwide. Since 2017, the Audi RS 3 LMS, designed for the TCR touring car category, has rounded out the range toward entry-level racing. A year later, the Audi R8 LMS GT4 followed as an ideal race car for entry-level GT racing. Since 2019, the fascinating Audi R8 LMS GT2 – with 640 horsepower the most powerful customer racing sports car – has expanded the program to four models now.

“Vorsprung durch Technik” to continue
Audi races with electric power and was the first German automobile manufacturer on the Formula E grid. With four victories and eleven podium finishes in total Audi Sport ABT Schaeffler clinched the teams’ championship after twelve races. The commitment in the fully electric racing series that is currently experiencing a boom with the participation of additional manufacturers and partners forms the electric pillar of the motorsport program.