Format of a race weekend

One of the many aspects unique to Formula E is that all the racing action takes place on a single day. A typical race day looks like this:

(every driver has a timed lap with 200 kW output)

Double-header events are held on two days. Each race is treated like an independent E-Prix.

The 20 drivers are divided into four groups of five by the current Championship positions. The order of the individual groups is determined by a draw. Each group has six minutes to set a fast time. Following the so-called “out lap” from the pit lane and one or several warm-up laps with 180 kW power output, a single “flying” lap may be driven at the full power of 200 kW. The five fastest drivers, irrespective from which group, participate in the Super Pole shootout in which every driver sets another timed lap at full power (200 kW). The starting grid results from the lap times posted in the Super Pole shootout (positions 1–5) and the group stage (positions 6–20).

The race or E-Prix begins with a standing start (no formation lap). The drivers initially line up on a dummy grid and slowly file into position for the race start. The race lasts about 50 minutes. About halfway through the race, the drivers visit their teams for a mandatory pit stop at which the car is changed. For the 2017/2018 season, the maximum power in race mode is raised from 170 kW to 180 kW.

Formula E fans have the possibility to support their favorite drivers with an advantage in the race. To do so, they can vote before and during the first six minutes of the race via Twitter, the official Formula E website (fanboost.fiaformulae.com) and the Formula E app. The three drivers with the largest number of votes will receive the so-called FanBoost. It enables them to use an additional 100 kJ of energy once in a power window of 180 to 200 kW by pushing a button in the second car – in other words following the mandatory pit stop.

The top ten in each race are awarded points using the standard FIA system analogous to Formula 1 and DTM:

Three additional points are awarded for pole position. The driver with the fastest race lap earns an additional point – albeit since 2017/2018 season only if he/she finishes in the top ten at the same time. This is intended to prevent a driver who is no longer in contention in the race from specifically going after this additional point.

Formula E consists of both a drivers’ and a teams’ championship. The end-of-season totals of the drivers are made up of their results in the races. The points scored by both drivers of a team are totaled throughout the season for the teams’ championship.

Official tire supplier Michelin makes four new front and four new rear tires available to each driver at each event. In addition, all drivers can use a front and a rear tire each from the previous race. The tires are profiled. 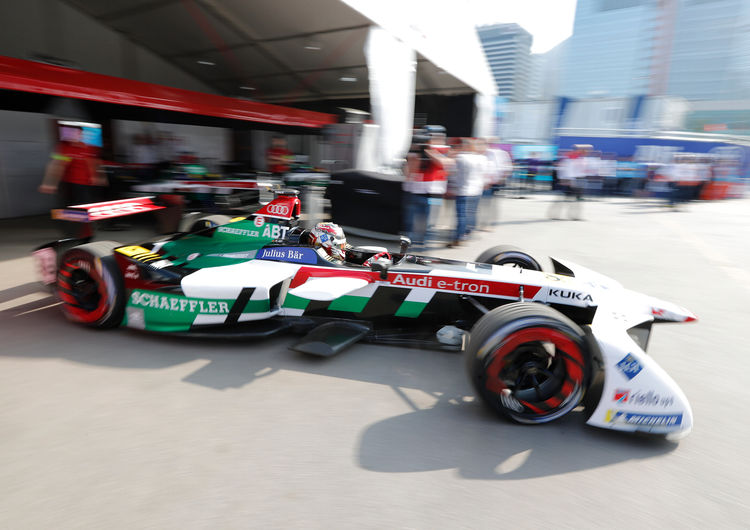