OLED display: the next step with the Audi virtual cockpit 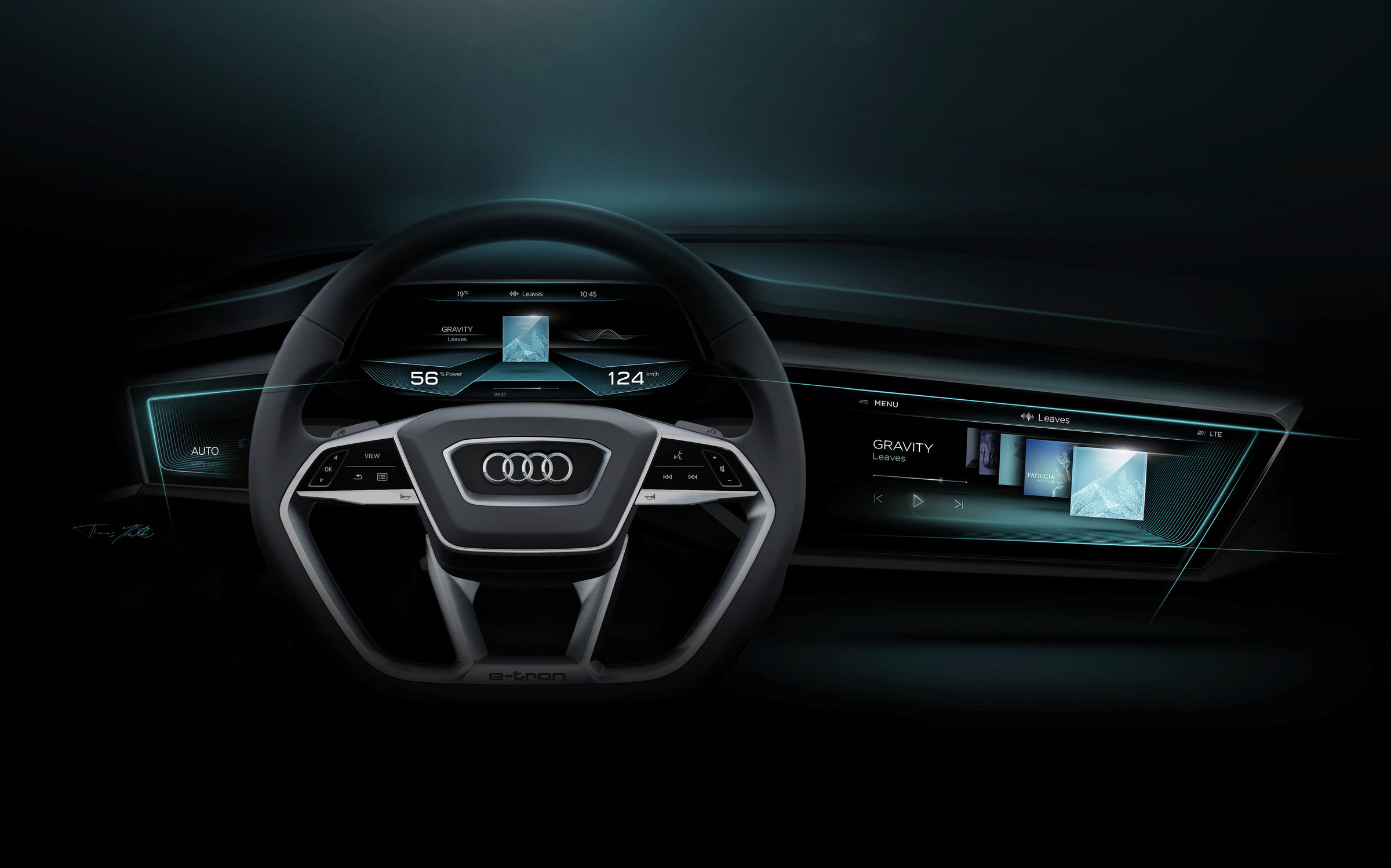 The operating and display concept of the Audi e-tron quattro concept is deeply integrated into the plastic, driver-oriented architecture of the cockpit. It is characterized by the large OLED displays. Here Audi is continuing the line of its most recent concept studies. Some details will make their way into production vehicles in the foreseeable future.

Three OLED displays are located in front of the driver. The new Audi virtual cockpit curved OLED is a further development of the Audi virtual cockpit that first appeared in production vehicles in 2014: a free-standing, thin OLED display with a narrow aluminum clasp and a slightly curved, ergonomic surface. This curvature ensures that the driver can easily read all the information displayed. Also new is the free configuration of the contour, which breaks from the typical rectangular format used previously. This is a strength of OLED technology, in which extremely thin films are used.

The basic menu of the Audi virtual cockpit curved OLED displays the speed, charge status of the battery and range. Its sophisticated graphics give the two-dimensional displays a 3D look.

To the left and right below the Audi virtual cockpit curved OLED are two touch displays. The driver controls the lighting functions and the systems for piloted driving with the left display. The 14-inch display on the right is asymmetric, just like the instrument cluster. It is used to control media lists and navigation maps. In Sport mode, it displays the prevailing acceleration forces or the route.

The central display reacts to optical and acoustic signals. It is therefore extremely well suited for communication while driving, and especially for monitoring children. If the child in the back seat wants to talk to the driver, the child’s face appears on the central display on the instrument panel.

Two more displays are found on the center console. One is installed flush with the console and displays the drive status. The front display, which is curved upward, offers some gesture controls and visualizes the climate control system, which is operated using virtual sliders. Four freely-programmable preset buttons enable the driver to call up important information such as weather, appointments or addresses. Two more displays, likewise with slight curved surfaces, are found in the front section of the doors and serve as digital exterior mirrors. Their specially processed camera image is bright even in poor lighting conditions, with good contrast and free of glare.

The two rear passengers in the Audi e-tron quattro concept have their own OLED displays. They use these to operate the climate control and infotainment for their area or to exchange media data with the driver. The concept study is connected to the Internet via a fast LTE module using the fast standard. Passengers can surf the web and send emails with their mobile devices. Tailored services from the Audi connect portfolio are delivered to the car for the driver.

The driver of the Audi e-tron quattro concept can also control numerous functions using the flat-bottomed, deeply bowled steering wheel, the horizontal spokes of which have special touch surfaces. Contours milled in the glass help to guide the thumb, and each input is followed by a slight vibration. The driver uses two paddles to choose the level of recuperation.

On the center console is a low, wide selector lever with a button for the driving programs. With a light tap forward or back the driver changes between the positions P, R, N, D and S.

Graduated gray tones: Colors and materials
The interior of the Audi e-tron quattro concept is bathed in a cool gray suggestive of technology and whose tones are finely graduated from top to bottom. The floor of fine Nappa leather also includes fabric floor mats with a thick, rubber-like yarn. This yarn is particularly durable and provides good hold.

On the seating surfaces and door top shoulders, sporty Alcantara provides a subtle contrast to the soft fine Nappa leather, which covers the head restraints, side bolsters, backrests and armrests. The seats have a special stitch pattern; the instrument panel has a leather finish. The frames and clasps of the controls and seats are made of darkened, brushed aluminum, whose polished, bright edges set sophisticated accents.