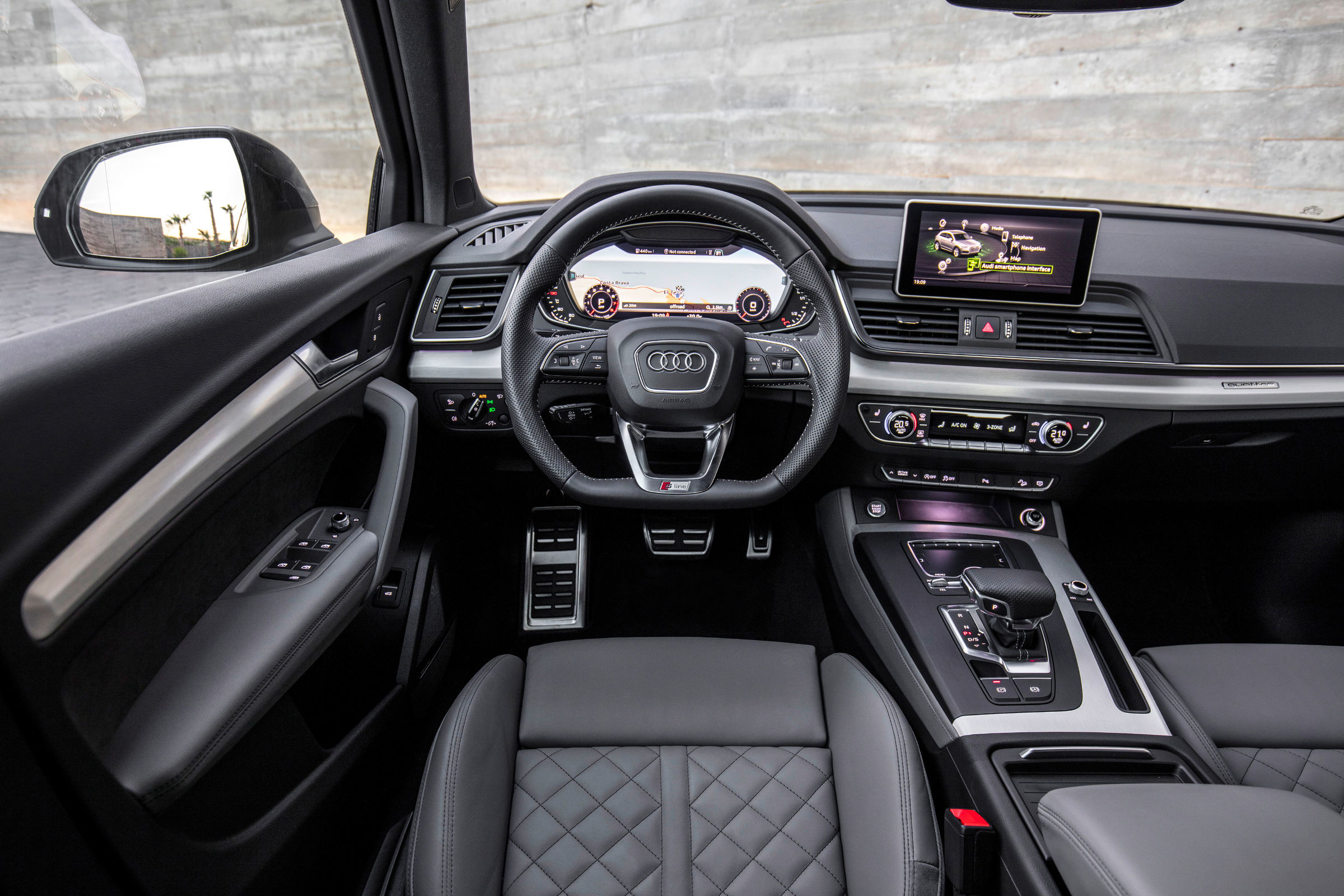 MMI radio plus, MMI navigation, MMI navigation plus, Bang & Olufsen Sound System, Audi tablet – the line-up of infotainment modules for the new Audi Q5 is wide-ranging and highly attractive. The same applies to the online services of Audi connect.

The second generation modular infotainment platform (MIB 2) serves as the basis here. Its scalable approach lets Audi update the hardware over short time cycles in development. As a result, the brand can react quicker and more flexibly to innovations in consumer electronics that arrive on the market in quick succession, and it can optimally exploit the potentials of new generations of chips.

Even the standard MMI radio plus serves up an extensive list of features – a MMI monitor with 7-inch diagonal, the driver information system, a CD drive and eight loudspeakers. A SDXC card reader, a Bluetooth interface, aux-in port, phone voice control and USB socket with charging function all ensure well-rounded entertainment and comfort.

Along with a second card reader, MMI navigation, the first module option, offers a high-resolution 7-inch monitor which shows the navigation map as a 3D terrestrial model. Other highlights are a voice dialog system, which processes entire sentences and MMI search. The Audi connect module is a LTE/UMTS module that Audi is using to bring the Audi Q5 online with up to 100 MBit/s download speed. Passengers can freely surf, stream and mail with their mobile devices via the integrated Wi-Fi hotspot. The services of Audi connect such as traffic information online, Google Earth and parking information can be used free-of-charge for three months. After that they are available at a charge. They can be extended for three years as an option.

The new Audi Q5, like the Q7 and A4, has a self-learning “personal route assist” function. After activating this function, the navigation system learns the routes and destinations that the customer regularly selects, and it associates this information to the parked position and time of day. The system learns from the customer's behavior whenever it is active. On this basis, it uses the information to suggest optimized route planning for the next trip – even if route guidance is inactive. The navigation system incorporates the three most likely destinations into the calculation, taking into consideration both the arrival time and current traffic levels. This makes it possible, for instance, to suggest activating navigation to the customer so that potential alternative routes can be proposed. The customer can activate or deactivate the function, or delete destinations saved by the function. If the function has been deactivated, the destinations are not saved, nor are deleted destinations or routes driven taken into account.

MMI navigation plus with MMI touch or MMI all-in-touch tops the infotainment line-up. It adds an 8.3-inch monitor with 1,024 x 480 pixel resolution; in this case the driver information system monitor has a 7.0-inch diagonal. MMI touch serves as an intuitive input instrument, and a DVD drive, a 10 GB flash memory and natural voice control round out the equipment.

The optional Audi connect module offers a wide array of features. They range from navigation with Google Earth and Google Street View to traffic information online and social media such as twitter which have been specially prepared for use in the car. Practical information services on parking spaces, travel destinations, weather data and much more round out the features together with convenient reading and dictation functionality. The new Audi Q5 with Audi connect also has a mastery of emails, SMS and personal smartphone calendars.

As an option, Audi can install the data volume needed to use the Audi connect services in the new Q5 from the factory. The Audi connect SIM is what is known as an embedded SIM (e-SIM) that is permanently installed. The new SIM card offers a high level of usefulness, particularly to those customers who frequently travel to other European countries. In most countries, it accesses the country’s provider autonomously; annoying roaming fees and confirmations are a thing of the past.

Independent of this, customers can also purchase additional data packages for the Wi-Fi hotspot. If a customer selects a European data package, the data transfer also automatically works at the same fixed rate after crossing an international border – and thus when changing internet provider. Data packages can be purchased from the online shop of Audi’s partner Cubic Telecom, a leading provider of seamless global connectivity solutions. Customers can reach the shop via their myAudi account. Once the appropriate packages have been enabled, they can be ordered directly from the MMI system in the car.

As an alternative, Audi Q5 owners may also continue to use their own SIM card in the car and establish Wi-Fi internet access through their own cellular provider. In this case, the Audi connect SIM is temporarily deactivated, and the data volume used for the Audi connect services is charged against the personal SIM card.

In addition to the Audi connect SIM, the new Audi Q5 also has a second permanently installed SIM card in a very crash-safe zone in the vehicle – from the optional package it brings the services of Audi connect safety & service including vehicle control into the car. They include the myService functions emergency call, online roadside assistance, Audi claim service and Audi online service request; they are free-of-charge for ten years.
The remote services of Audi connect’s myCar Manager are enabled for three years. With these, the owner of the new Q5 can use a smartphone to remotely control locking and unlocking, the auxiliary heater and to remotely access the vehicle status report and parking location and duration. Moreover, owners can be informed by the smartphone via push notification if the anti-theft warning system of their car has triggered.

Music and much more: the Audi MMI connect app

The free Audi MMI connect app is needed to be able to use the services of Audi connect myCar Manager. Besides remote services, the app’s versatility is impressive. It lets users receive over 3,000 internet radio stations and access the media library of a smartphone. Another function, online media streaming, offers access to the products of Napster, Rhapsody and Aupeo! The audio files are transmitted from the smartphone to the car’s infotainment system via Wi-Fi.

High-tech hardware: the other infotainment modules

There are also attractive individual hardware modules to choose from in the new Audi Q5. They include tuners for digital radio and digital television. The Audi phone box, located in a movable storage compartment on the middle tunnel console, wirelessly couples the smartphone to the car’s antenna by near-field coupling; this delivers ideal reception quality. If the phone is equipped for inductive charging, this can be done based on the Qi standard. Extended hands-free functionality lets users connect two cell phones simultaneously (e.g. for personal and business use) – including address books.

In the Audi sound system, a six-channel amplifier drives ten loudspeakers at 180 watts of audio power. For discerning hi-fi fans, the Bang & Olufsen Sound System with 3D sound is available in the new Audi Q5. An algorithm computes information for the third dimension from conventional stereo or 5.1 recordings. Four additional loudspeakers in the front doors and the A-pillars play back the signals – the music sounds airy and open on a large virtual stage. The 16-channel amplifier supplies 755 watts of power to 19 loudspeakers. On the door loudspeakers, narrow light pipes illuminate the aluminum accents in the loudspeaker covers.

Another high-end option in the new Audi Q5 is the Audi tablet with its high-resolution 10.1-inch screen. It appeals with its functionality, safety and convenience, and it offers a cinematic experience at the rear seats. As a mobile Rear Seat Entertainment system, it connects to MMI navigation plus via Wi-Fi. This gives it access to the Radio, Media, Navigation and Car function menus. The sound is output either over the on-board sound system or through headphones.

The Audi tablet uses the Android operating system and supports NFC technology (NFC = Near Field Communication) for transmitting data by proximity from the smartphone or for connecting headphones quickly and easily. It has a 32 gigabyte internal memory that can be expanded by micro SD card. The integrated full HD camera can be used to make video calls. After the trip, users can take the Audi tablet with them to continue to use it offline or over an external Wi-Fi network.

The Audi tablet has a chassis made of anodized aluminum, which is indicative of its high quality. Together with its rechargeable battery, it is logically designed for use in the car. It can also handle high or very low temperatures without problems; the tilt-adjustable bracket on the back of the front seat is collision-proof and removable if required. The Audi tablet is available individually or as a set of two.

The Audi smartphone interface brings Apple Car Play and Android Auto into the car. When a customer connects an iOS or Android cell phone (iOS 7.1 or higher, Android 5.0 Lollipop or higher) to the USB port, smartphone content such as Navigation, Phone, Music and select third-party apps are made available. They can be conveniently operated by MMI or voice control.

Audi has designed both applications especially for use in the car. The core content here is online music with access to the entire range of music from Google Play Music and iTunes. There are also navigation and notification functions as well as schedule reminders. New third-party apps like Pandora, Spotify and WhatsApp will further expand the range of features.