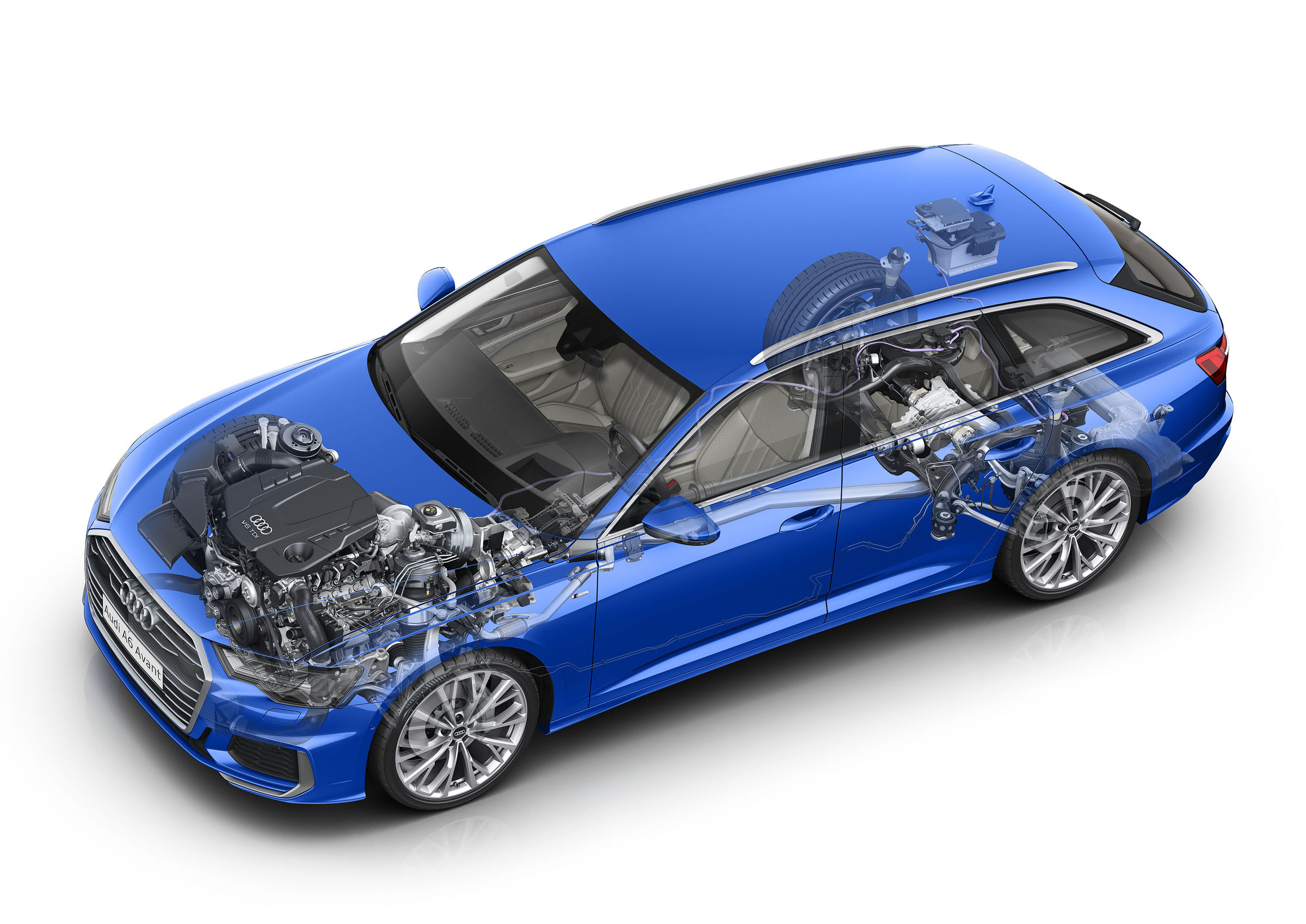 The new Audi A6 Avant is more agile than any of its predecessors thanks to a comprehensive range of chassis technologies, including dynamic all-wheel steering. Four powerful and efficient four and six-cylinder engines deliver impressive performance.

Chassis
Maneuverable in the city, agile on winding roads, comfortable and composed on the highway – the chassis of the new A6 Avant unites disparate abilities even better than the predecessor model. Standard is the sporty and direct progressive steering, which develops significantly higher return forces with increasing steering angle for precise steering feedback. Its newly developed power assist tightly connects the driver and road, transferring useful information to the driver but filtering out unpleasant jolts from road surface irregularities.

Audi offers dynamic-all-wheel steering as an option. It combines dynamic steering at the front axle, which uses an infinitely variable strain wave gearing, with a separate rear axle steering system with a spindle drive and track rods. This makes it possible to independently adjust the steering angles at the front and rear axles. Unique in its class, this combination of superimposed steering and rear axle steering resolves the traditional conflict of objectives between spontaneous response and high stability, and makes the A6 as maneuverable as a compact model.

At low speeds the rear wheels of the new Audi A6 Avant turn as much as five degrees in the opposite direction relative to the front wheels. This reduces the turning circle by as much as one meter (3.3 ft), and the car is more agile in city traffic and tight curves. At intermediate and high speeds, the rear wheels turn by as much as two degrees in the same direction. Now the Avant is rock-steady on the road. Overall the dynamic all-wheel steering can vary the ratio between 9.5 and 16.5:1.

Both the front and rear axles of the new Audi A6 Avant are five-link constructions made largely of aluminum. Two subframes, the front one rigid and the rear one mounted on hydraulic bearings, join the control arms to the body. The front axle is much more rigidly connected than in the predecessor model. The track measures 1,630 millimeters (5.35 ft) up front and 1,616 millimeters (5.30 ft) at the rear.

Audi offers two sportily balanced standard suspensions and three alternatives. The sport suspension (individual option or in S line sport package) lowers the body ride height of the A6 Avant by 20 millimeters (0.8 in). The suspension with damper control is tuned for more comfort despite by 10 millimeters (0.4 in) lower. Its controller conserves energy. Higher current only flows when the valves are closed to firm up the dampers for fast driving.

The third option is the particularly comfortable adaptive air suspension. It can be set to several modes and includes automatic level control. In the normal position, the body is 20 millimeters (0.8 in) lower than with the standard suspension. At speeds of 120 km/h (74.6 mph) and above, it is lowered by another 10 millimeters (0.4 in). This improves not only stability but also the aerodynamics at high speeds.

The controlled suspension systems, the dynamic all-wheel steering and the sport differential, which distributes the power between the rear wheels, are all managed by the new electronic chassis platform (ECP). As the central chassis controller, it collects comprehensive information about the movement of the car and the data from the systems involved. From these, it quickly calculates and closely coordinates the optimal function of these components. The effects of this highly networked management are readily apparent, whether in cornering behavior or ride comfort. The driver can adjust the function of the controlled modules in the Audi drive select dynamic handling system with the modes comfort, auto, dynamic, efficiency and lift (with air suspension). The driver experiences a new, extremely wide spread between comfort and sport – even the dynamic all-wheel steering varies its ratio and the degree of feedback.

Wheels for the new Audi A6 Avant begins with the sizes 17 and 18 inches. From 19 inches and above, torus absorbers – foam pads glued into the inside of the tires – reduce unwanted droning frequencies. The largest wheels measure 8.5 J x 21 and are equipped with 255/35 tires. If a wheel is not securely mounted, a warning integrated in the ESC controller is activated.

The brakes have been adapted to the increased dynamics and performance. All four discs are ventilated. In the most powerful six-cylinder variants, they measure 375 millimeters (14.8 in) in diameter (rear: 330 millimeters (13.0 in))and combine cast friction rings with aluminum brake pots. Regardless of the engine, each of the fixed aluminum calipers on the front axle has six pistons. Electronic Stabilization Control (ESC) provides even more precise control than in the previous model.

Drive system
All engines boast supreme power, smooth running and high efficiency. The V6 3.0 TDI is available in two versions, with both packed with innovative engine technology. Its thermal management has separate cooling loops for the crankcase and the cylinder heads. The heads feature two-piece water jackets. Cast-in channels cool the pistons with oil. Their rings and the wrist pins are designed for minimum friction; the oil pump is fully variable. Thanks in part to the crankcase made from lightweight cast iron with vermicular graphite, the V6 diesel unit weighs just 194 kilograms (427.7 lb).

The new 2.0 TDI is also characterized by low weight. Its crankcase is now made of aluminum rather than gray cast iron as before. The piston rings, the crankshaft and the cylinder head have been newly developed to reduce the moving masses and thus friction. The three-loop cooling system – one loop for the engine block, two for the cylinder head – makes it possible to set the ideal coolant flow in any driving situation. The newly designed turbocharger has a fast electric actuator for the variable turbine geometry (VTG). The new common rail injection system injects the fuel into the combustion chambers at pressures of up to 2,200 bar.

The V6 TDI quattro models transfer power via a smooth and fast-shifting eight-speed tiptronic. When coasting and rolling out, a clutch in the central transmission interrupts the power connection. An electric oil pump makes it possible to engage the gear that will be needed after the rolling phase. An rpm-adaptive torsion damper with a centrifugal force pendulum compensates for vibrations in the engine; this permits driving at engine speeds around 1,000 rpm. The 2.0 TDI is paired with a lightning-fast-shifting seven‑speed S tronic. They also are equipped with a centrifugal force pendulum. Two electric oil pumps and a pressure accumulator ensure shifting and clutching during coasting and stationary phases.

quattro all-wheel drive is standard with the V6 engine variants.. Its technology varies depending on the transmission used. In conjunction with the eight-speed tiptronic it is a purely mechanical version. Its self-locking center differential normally distributes the torque in a ratio of 40:60 between the front and rear axle. If grip decreases on one axle, it can transfer up to 70 percent to the front and a maximum of 85 percent to the rear.

During sporty driving, wheel-selective torque control underscores the precise handling. It slightly brakes the inside wheels before they can slip. Another possible supplement for the quattro drive in the Audi A6 Avant 45 TDI and the A6 Avant 50 TDI is the optional sport differential on the rear axle. During fast cornering, it sends most of the torque to the outside wheel, which has more traction.