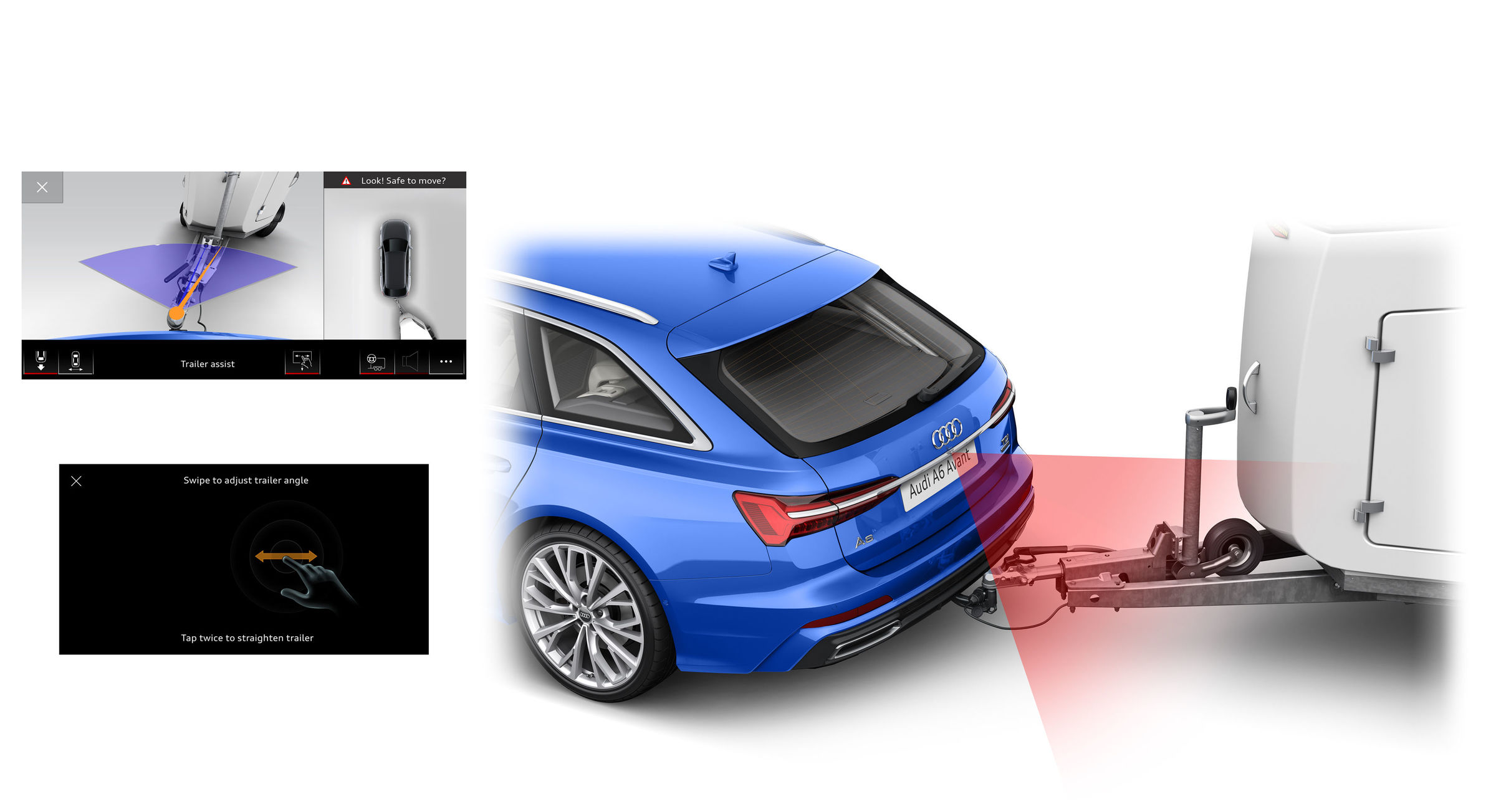 With up to 39 driver assistance systems, the new Audi A6 Avant sets standards in the business class for safe, composed driving. All engine variants include an MHEV system that further enhances comfort and efficiency. The operating concept, infotainment and online services from Audi connect are all state-of-the-art.

Driver assistance systems
The assist systems for the new A6 Avant make driving even more comfortable and safe. They also make the A6 the ideal choice for frequent drivers, commuters and business customers. The assist systems Audi pre sense front, lane departure warning, cruise control and speed limiter are standard equipment. Additional systems are available individually, while others are bundled into the City and Tour assist packages.

The central system in the Tour package is the adaptive cruise assist (ACA). It builds off of the adaptive cruise control (ACC) of the predecessor model and extends it with multiple systems, such as the predictive efficiency assist with camera-based traffic sign recognition and navigation data-based cruise control. A lane tracking function for narrow stretches and in traffic jams is also included. For greater efficiency, the powertrain management of the standard mild hybrid system is integrated into the adaptive cruise assist. The Tour assist package also includes turn assist and swerve assist.

One highlight of the Tour assist package is the crossing assist. If the mid-range radars at the vehicle’s front corners, which can look roughly 75 meters (246.1 ft) ahead, detect crossing traffic in front of the car, the system warns the driver. It also initiates braking, if necessary. Cross traffic assist rear, exit warning and lane change warning are based on the signals from the rear mid-range radars.

Available as separate options are the park assist, parking system plus, the reversing camera, 360 degree cameras, camera-based traffic sign recognition, the lane change warning with Audi pre sense rear, the night vision assist and the lane departure warning with emergency assist. This recognizes when the driver fails to act and warns them in such cases. If there is still no reaction, it brings the car to stop in its lane. When backing up, the trailer maneuver assist steers the trailer in the direction set by the driver on the lower MMI display. An image from the reversing camera or optionally a 360-degree image from the top view camera shows the driver the area to the rear on the top MMI display.

Behind the assist systems in the new Audi A6 Avant is a broad portfolio of sensors that are configured redundantly for maximum system reliability. Fully equipped, the set includes 24 sensors:

All sensor data flows together in the central driver assistance controller (zFAS). With the help of the differentiated model of the vehicle’s surroundings that it continuously computes, the assist systems can react more precisely and sooner to changing driving conditions than in the predecessor model.

Connectivity
The new Audi A6 Avant adapts fully to its owner thanks to its comprehensive range of infotainment modules and software services. MMI navigation is standard; the top system, MMI navigation plus, is optionally available. Both modules are based on the latest-generation Modular Infotainment Platform, the MIB 2+. With the MMI navigation plus it includes an Audi connect data transfer module designed for the high-speed LTE Advanced standard.

With both infotainment systems, navigation also considers the driver’s habits. During route planning, it makes suggestions based on previously-driven routes, taking into account the time and traffic congestion. The route is calculated online on the servers of the service provider HERE, which uses data from the overall traffic situation. If the data connection is interrupted during the journey, the navigation switches to the onboard route guidance that runs in parallel. The map is displayed in a new texture, and four free updates are provided each year. They can be delivered to the car over the air, if desired.

The A6 Avant comes standard from the factory with the useful Audi connect safety and service package, which includes functions for controlling the vehicle. To use these, the customer simply has to register with myAudi as the primary user. The driver can use these services to view vehicle information, such as the fuel level, parking location and whether the doors are locked, for example, in the myAudi app. If the driver forgets to lock the car, this can be done later from anywhere using the app. The driver can also unlock the car remotely should this ever be necessary. The myAudi app provides access to the brand’s digital ecosystem via a smartphone. It integrates services where the transition from phone to car is seamless, such as myAudi navigation or the calendar. The myAudi app is also used to manage the Audi connect key, another option in the new A6 Avant. It can lock and unlock the doors as well as start the engine via near field communication (NFC) via the owner’s Android smartphone.

MMI navigation includes a wide range of Audi connect navigation & infotainment services. Thanks to its online connection, these services provide the A6 Avant with real-time information on such things as current fuel prices at gas stations or the number of empty spots in parking garages. Customers choosing MMI navigation plus benefit from an expanded portfolio of connect services, such as the online, term-based search for navigation destinations and improved voice recognition. The latter event allows the free formulation of text messages.

Google Earth or the alternate high-resolution map with 3D buildings make MMI navigation plus a visual highlight. The Audi connect services are provided via the Audi connect SIM which is permanently installed in the vehicle and are free of charge for the first three years after purchasing the new car. The customer can also purchase data plans for a separate Wi-Fi hotspot for the passengers’ mobile devices. Online media streaming (Amazon Prime Music, for example) is thus possible, as is listening to web radio stations via the online radio. The hybrid radio function allows the latter to seamlessly switch to the radio station’s online stream upon leaving the terrestrial broadcast area. That way you’ll always have your favorite music with you.

The Audi phone box is a hardware option that links the owner’s smartphone to the vehicle’s antenna and charges the phone inductively at the same time. Voice over LTE, another Audi phone box function, helps to connect faster while also allowing the simultaneous use of high-speed data transfer and high-resolution online voice telephony.

In the new A6 Avant, up to six drivers and one guest can store a maximum of 400 preferred settings in individual profiles. This standard personalization covers virtually every area of operation, from climate control to navigation destinations and preferred media. The automobile identifies the respective user on the basis of the key signal and then activates the associated individual profile automatically.

Operating system
In the new Audi A6 Avant, the customer can choose to operate the car with the fully digital MMI touch response operating system, the online voice control, and controlling the Audi virtual cockpit via the buttons on the steering wheel.

Borrowing from the flagship Audi A8, the new A7 Sportback and the new A6 Sedan, the A6 Avant uses the groundbreaking MMI touch response operating concept, thus going all-in on digitalization. Two touch displays with tactile and acoustic feedback replace the rotary pushbutton and most of the buttons and controls of the predecessor model. The new concept transports Audi’s quality standards into the digital age and offer a high degree of operating safety with its haptic and acoustic feedback.

The splitting of functions between the two screens ensures clear orientation for the user. The top display is used to control the infotainment. If equipped with MMI navigation plus, it has a diagonal of 10.1 inches, otherwise 8.8 inches. The 8.6-inch bottom display is located on the center console. This is where the driver operates the climate control, comfort and convenience functions and performs text entry, resting their wrist on the selector lever for the automatic transmission in every Audi A6.

Information can be read quickly and easily on both MMI touch response displays thanks to the clean graphical user interface. The menu structure is also lean and intuitive. MMI search works with free text input. With many searches, the hit list appears after just a few letters. On the top display, users can arrange the start screen icons however they want, just like on a smartphone. They can also create custom shortcuts for numerous vehicle functions on the bottom display.

Another option is the standard natural voice control with more than 250 functions. It allows you to speak totally naturally and responds to questions and commands in two ways: using onboard information about favorite destinations and media and in parallel to this with knowledge from the cloud. The online information tends to be more comprehensive; the onboard information can be accessed particularly quickly and reliably, even where there is no mobile communications network, such as in an underground garage.

MMI navigation plus also brings the Audi virtual cockpit to the new Audi A6 Avant. The all-digital instrument cluster measures 12.3 inches in diagonal and offers a resolution of 1,920 x 720 pixels. Operation is via the multifunction steering wheel, and the driver can choose between the classic view and infotainment mode. In addition, the head-up display projects important information, such as a detailed map of a junction, onto the windshield. The image window measures 22 x 8 centimeters (8.7 x 3.2 in) and appears to hover more than two meters (6.6 ft) in front of the windshield.

Broad-based electrification
All engine variants in the new Audi A6 Avant are equipped standard with mild hybrid technology (MHEV, mild hybrid electric vehicle). With the V6 engines, it uses a 48-volt electrical system; it operates on the basis of 12 volts with the four-cylinder versions. The central MHEV component for the 12- and 48-volt systems is the belt alternator starter (BAS). During deceleration it can recover up to 12 kW of power (with a 48-volt system) and feed the power into a separate lithium-ion battery housed on side in the rear of the car. In customer driving, the technology can reduce fuel consumption by up to 0.7 liters per 100 kilometers.

MHEV technology enhances the comfort and efficiency of the long-distance A6 Avant. If the driver takes his foot off the accelerator between 55 and 160 km/h (34.2 and 99.4 mph), the new Audi A6 Avant can coast with the engine switched off – with the 48-volt system for up to 40 seconds. As soon as the driver accelerates again, the BAS starts the engine quickly and smoothly. The 48-volt system allows for start/stop operation from a speed of 22 km/h (13.7 mph). With the 12-volt system in the 150 kW 2.0 TDI, this begins at 15 km/h (9.3 mph). The mild hybrid system is connected to the camera sensors for even greater efficiency. The engine then starts from stationary even with the brake pressed once the front camera detects that the vehicle ahead starts to move.