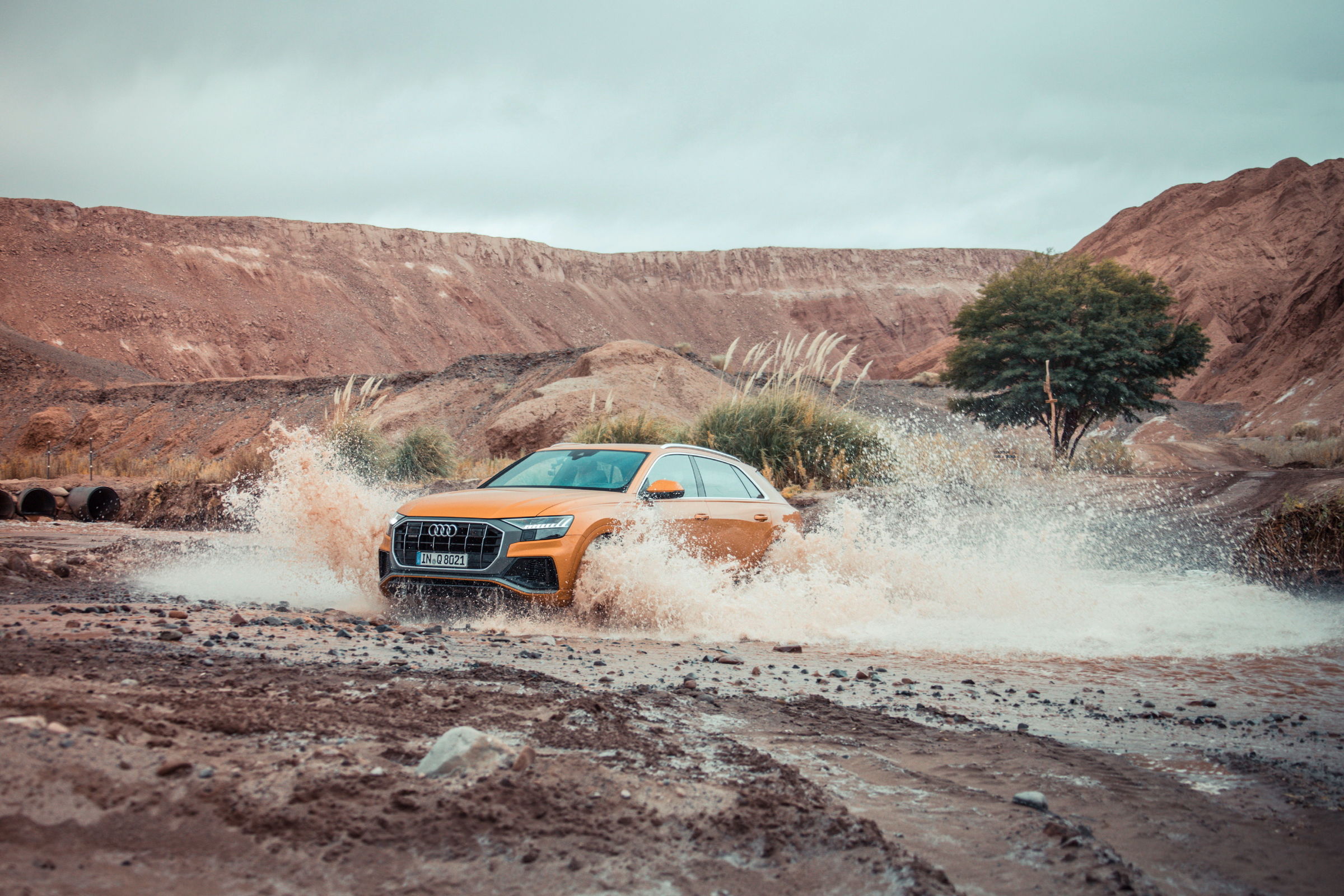 ** Figures depend on the tire/wheel combination used

The 3.0 TDI in the Q8 50 TDI offers sophisticated solutions for many technologies. Thanks in part to its crankcase of lightweight vermicular graphite cast iron, it weighs just 190 kilograms (418.9 lb). The camshafts are hollow. The crankcase and the cylinder heads have separate coolant circuits so the ideal temperature level can be set for any driving situation. The heads feature two-piece water jackets. Cast-in channels cool the pistons with oil. Their rings and the wrist pins are designed for minimum friction; the oil pump is fully variable. The turbochargers generate up to 2.0 bar of relative charging pressure.

Switchable hydraulic bearings connect the 3.0 TDI to the subframe of the front axle. At idle, they eliminate vibrations with soft characteristic curves; while driving they use higher damping to suppress engine vibrations. The powerful TDI is highly cultivated and very efficient. In the NEDC, the base version of the Audi Q8 50 TDI consumes 6.6 liters of fuel per 100 kilometers (35.6 US mpg), corresponding to 172 grams of CO2 per kilometer (276.8 g/mi). Standard capacity of its SCR tank is 24 liters (6.3 US gal).

Lithium-ion battery and belt alternator starter: the mild hybrid technology
A key factor for the efficiency is the mild hybrid technology from Audi. In customer operation, it can save as much as 0.7 liters per 100 kilometers. In the Audi Q8, a 48-volt main electrical system incorporates two important technology modules: a lithium-ion battery located beneath the luggage compartment floor and a 48-volt belt alternator starter (BAS) connected to the crankshaft. During braking, it can recover up to 12 kW of power and feed it back into the battery.

At speeds between 55 and 160 km/h (34.2 and 99.4 mph), the SUV coupé can coast for up to 40 seconds with the engine deactivated when the driver lets off the accelerator. The BAS then restarts the engine quickly and very smoothly. The start-stop range begins at 22 km/h (13.7 mph).

Extremely smooth and fast: the transmission
The 3.0 TDI is paired standard with an eight-speed tiptronic that shifts fast and smoothly. A torsional vibration damper, which acts based on engine speed, largely compensates vibrations due to the engine’s work cycles to allow efficient driving even in the low-rev range from 1,000 rpm. When coasting and rolling out, a clutch in the central transmission opens and interrupts the power connection. With its electric oil pump, the tiptronic can engage the gear required for restarting while coasting with the engine switched off. Special ventilation allows off-road use.

Audi is quattro, and quattro is Audi. With the Q8, the brand’s top SUV, the permanent all-wheel drive is always on board. Constructed as a planetary gear, the purely mechanical center differential normally transfers the forces to the front axle and rear axle at a ratio of 40:60. If one wheel slips, most of the drive torque automatically goes to the axle with the better traction. Up to 70 percent can flow to the front wheels and up to 85 percent to the back wheels. During sporty driving, wheel-selective torque control – an intelligent software function of the ESC Electronic Stabilization Control – minimally brakes the wheels on the inside of a curve. The car turns into the curve ever so slightly. Turn-in behavior remains neutral longer, and handling becomes more precise, agile and stable.

Sporty and robust: the suspension
Responsive on narrow country roads, composed on the highway and robust off-road: the suspension of the Audi Q8 also combines the best characteristics from various worlds. Five-link suspensions are used at the front and rear so that longitudinal and lateral forces can be handled separately. The linkages and the subframes are made largely of aluminum. The SUV coupé has a track of 1,679 millimeters (5.51 ft) up front and 1,691 millimeters (5.55 ft) at the rear.

The standard progressive steering in the Audi Q8 features a sporty and rather low ratio of 14.6:1 in the center position and becomes even more direct with increasing steering angle. The steering system with its electromechanical drive provides differentiated road feedback. It responds spontaneously and is highly precise.

Audi also offers optional all-wheel steering. With this system, a high-torque electric spindle drive and two track rods turn the rear wheels. At low speeds, they turn up to 5 degrees opposite the direction of the front wheels. They thus reduce the SUV’s turning circle by a good meter (3.3 ft) and make it even more agile. At high speeds, they turn up to 1.5 degrees in the same direction as the front wheels to provide greater stability during fast lane changes.

The Q8 rolls off the assembly line on 19-inch wheels with particularly good aerodynamic properties and 265/55-series tires. 20-, 21- and 22-inch tires are optionally available, the latter with 285/40 tires. All wheels are 20 millimeters (0.8 in) larger in diameter than those of the Q7. The 21- and 22-inch wheels feature torus absorbers – layers of foam between the running surface and the carcass – to dampen undesired frequencies and noise radiation. Mounted on the front axle of the Audi Q8 are six-piston, fixed-caliper brakes. The discs have central pots made of aluminum; the internally vented friction rings are made of cast iron. They measure a large 375 millimeters (14.8 in) in diameter up front and 350 millimeters (13.8 in) in the back.

Versatile: the adaptive air suspension
Customers can choose between three variants for the suspension setup. The suspension with damper control is standard. The adaptive air suspension with controlled damping is an optional feature, with either comfort or sport setup. The Audi Q8 then sits a good 15 millimeters (0.6 in) lower than with a steel spring suspension, which has 220 millimeters (8.7 in) of ground clearance. The air suspension can be set to four modes via the Audi drive select dynamic handling system, varying the ride height of the body by up to 90 millimeters (3.5 in) depending on the driver’s wishes and the driving situation. At speeds up to 30 km/h (18.6 mph), the driver can increase ground clearance by up to 50 millimeters (2.0 in). As the speed increases the suspension automatically lowers the body in stages. This leads to a reduction in air resistance and increased driving dynamics.

Tightly networked: Audi drive select and the electronic chassis platform
With Audi drive select, drivers can vary the characteristics of their SUV between seven profiles – comfort, auto, dynamic, individual, efficiency, allroad and offroad, the latter only in combination with the air suspension. The dynamic handling system influences engine and transmission management, steering boost, the function of the automatic air conditioning and the optional all-wheel steering among other things.

Management of all adjustable suspension systems is integrated into the control unit for the electronic chassis platform (ECP). The systems are tightly networked and work in a highly coordinated manner with maximum precision. The dampers are actuated in millisecond cycles, for example. As the central suspension controller, the ECP collects all key data about the movement of the car and about the systems involved. The integral dynamic handling controller then uses these data to compute the optimal function of these components.

Off the beaten track: hill descent control
Off-road, the Audi Q8 benefits from quattro drive, the short overhangs and the high ground clearance – a maximum of 25.4 centimeters (10.0 in) with the adaptive air suspension. With the standard suspension it is 22 centimeters (8.7 in). If the driver chooses offroad mode in Audi drive select, the electronic stabilization control automatically switches to stability, traction and braking control modes that are optimized for off-road driving. It also activates the standard hill descent control. On steep slopes over six percent, this function provides support with automatic braking input. The system maintains a constant speed up to a maximum of 30 km/h (18.6 mph), which the driver sets by accelerating or braking. This allows the driver to concentrate fully on the terrain. The electronic chassis platform captures the tilt angle of the car and displays this information for the driver on the MMI. The ESC also has a sport mode that enables even more agile handing by adjusting the influence on engine torque braking input. The driver can also deactivate the ESC in part by pressing a button.