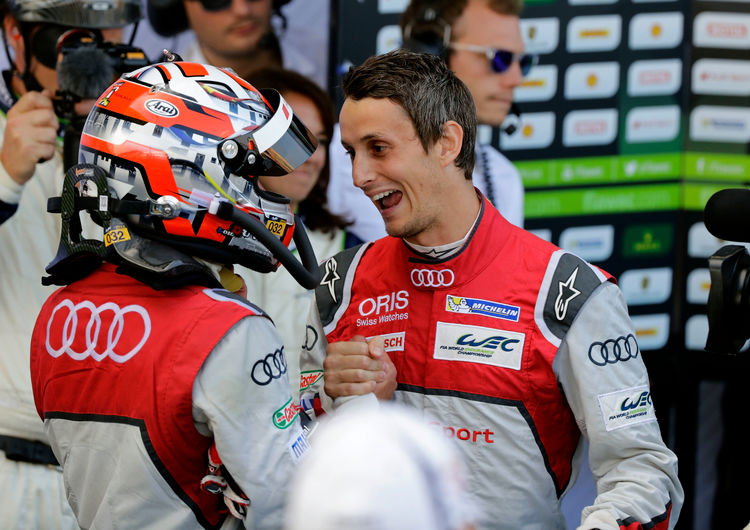 Quotes from the Audi team following the two podium results in the FIA World Endurance Championship (WEC) at the Nürburgring.

Dr. Wolfgang Ullrich (Head of Audi Motorsport): “The second half of the year started really well for us. Our new car has great potential. First, we took pole position, then we were continually at the very front of the field in the race, plus we set the fastest race lap as well – that was a class act. Victory was within reach. Positions two and three are a good sign that we’re in contention. That’s the basis for our battle for the championship in the next five races.”

Stefan Dreyer (Head of LMP): “The race was superb for the spectators. Two Audi driver teams on the podium is a good result. The full-course-yellow period about halfway through the race was our major misfortune. But we saw how fast our car can be. The trackside squad and the teams in Neuburg and Neckarsulm were simply exemplary. Now we’re going to thoroughly analyze the entire race and look forward to Mexico.”

Ralf Jüttner (Team Director Audi Sport Team Joest): “When you start from positions one and two you don’t want to arrive in second and third place. But it was a good team result that will help us in the championship. Thank you to everyone for the hard work. In the race, both cars were running impeccably. There’s still more potential in the Audi R18 that we’re going to need for the rest of the season. We still have to work a little on our pit stops and on the consistency of our car across six hours of racing.”

Lucas di Grassi (Audi R18 #8): “We can be happy with our second place. We made no mistakes and constantly drove at the limit. When you’re on the front row you’d obviously like to win. But today we were lacking the necessary fortune. That’s why positions two and three for our team is okay.”

Loïc Duval (Audi R18 #8): “That we’re obviously well prepared for the second half of the season and fast are positives. Our race was good but we were lacking a little racing fortune. My teammates Olly and Lucas were fast. Unfortunately, we lost a little aerodynamic downforce during the race. Our goal was to stay in front of the number 2 Porsche. We did a good job of defending ourselves. Porsche was simply fortunate on the way to clinching victory.”

Oliver Jarvis (Audi R18 #8): “This second place after a fantastic race almost feels a little like a victory. The whole team deserves a good result. At the beginning, we were really fast and towards the end our lap times weren’t quite as good. We made a strong showing again after Le Mans and scored important points. It’s still going to be an interesting season.”

Marcel Fässler (Audi R18 #7): “The beginning of the race was great fun and went superbly. We were leading but then the aerodynamics at the front of the car slightly deteriorated. That’s why we changed the nose and André was able to attack again. His battle with Neel Jani may have been the best thing that fans have seen this year. It’s nice that we were good again after Le Mans. We’re pleased to take the trophy home but plan to be even better next time.”

André Lotterer (Audi R18 #7): “My teammate Marcel started the race superbly. The two of us took turns and in the end it was really thrilling once more. Those were nice position battles. As a team we worked together well today too, which is very important for Audi Sport. Now I’m looking forward to Mexico. Hopefully, Benoît Tréluyer will be fit again by that time so that the three of us can attack again.”