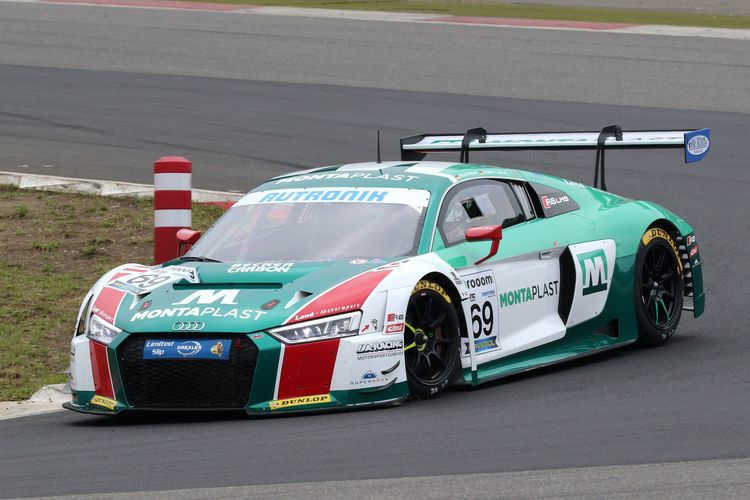 The customers of Audi Sport customer racing continue their strings of success. While the teams with the Audi R8 LMS in the DMV GTC won at the fourth consecutive event the drivers of the Audi RS 3 LMS were even unbeatable on five occasions.

Two victories at the Nürburgring: On the fourth race weekend of the DMV GTC, the customers of Audi Sport customer racing once again presented themselves in top form. After the privateers celebrated victories on each of the first three race weekends, they continued their string of success at the Nürburgring. Ronny C’Rock from Team Montaplast by Land Motorsport in an Audi R8 LMS won the first sprint in front of Carrie Schreiner from HCB-Rutronik Racing also in an Audi. In the second sprint, Carrie Schreiner again clinched second place. The Dunlop 60 race Carrie Schreiner and Kevin Arnold decided in their favor after this duo had previously won the one-hour race at Dijon on the second race weekend. As a result, team HCB-Rutronik Racing has remained unbeaten in the Dunlop 60 classification to date this season.

One-two results in Australia: Two Audi Sport customers scored two one-two results in the GT3 classification on the second race weekend of the GT-1 Australia. On the circuit at Morgan Park, Rod Salmon crossed the finish line 14 seconds ahead of his immediate rival Matt Stoupas. In race two, Stoupas finished ahead of Salmon. Both competed in an Audi R8 LMS ultra.

On podium twice in the Netherlands: Andreas Schmidt returned from the third race weekend of the Spezial Tourenwagen Trophy with two trophies. On the track at Assen in the Netherlands, the German in an Audi R8 LMS ultra clinched third place in his category in both races.

Trophy at the Nürburgring: Jean-Luc Weidt in an Audi R8 LMS GT4 finished on podium once again. The up-and-coming driver on the fourth race weekend of the DMV GTC took third place in his class in the second sprint.

One-two result in Austria: The Red Bull Ring proved worth a visit for the Audi drivers in the ADAC TCR Germany. On the third championship weekend, Dutchman Niels Langeveld with Team Racing One in an Audi RS 3 LMS won the race on Saturday. Second place in Styria was secured by the Finn Antti Buri in an Audi RS 3 LMS of Team LMS Racing. It marked the first one-two result this year for the Audi RS 3 LMS in the ADAC TCR Germany. In Sunday’s race, Buri finished runner-up again. In the championship standings, after three of seven events, Langeveld is in second position with a 22-point deficit. Buri, who had previously scored a victory, is in fourth place.

First TCR Europe victory this season for Jean-Karl Vernay: On the third race weekend, Jean-Karl Vernay with Leopard Lukoil Team scored his first victory this season in the TCR Europe. The Frenchman had started from pole position in the Audi RS 3 LMS and went on to win race one at Spa, plus posting the fastest race lap. After three of seven race weekends, Vernay is ranked in third place of the table even though he had to skip the second event.

Positions one and two in China: The new China Endurance Championship at Shanghai saw eight participants in the TCR class on the grid. Team Guang Dong Racing prevailed after four hours with a one-lap advantage. Huang Chuhan from China and Zhen Zhuowei from Hong Kong shared the cockpit of the Audi RS 3 LMS. The two Chinese Wang Hao and Lin Lifeng drove the team’s sister car to a second-place finish in their class.

String of victories unbroken: Kevin Arnold continues his string of victories in an Audi RS 3 LMS in the DMV GTC. The 18-year-old driver promoted from the Audi Sport TT Cup won his class in the first sprint race with a 1.2-second advantage at the Nürburgring. In round two, the driver from the German state of Baden-Württemberg finished three seconds ahead of his best immediate rival. Having scored eight victories, Arnold remains unbeaten in the DMV-GTC sprint races this year and has additionally scored a class victory in the Dunlop 60 endurance racing series.