Two city races in one week for Audi 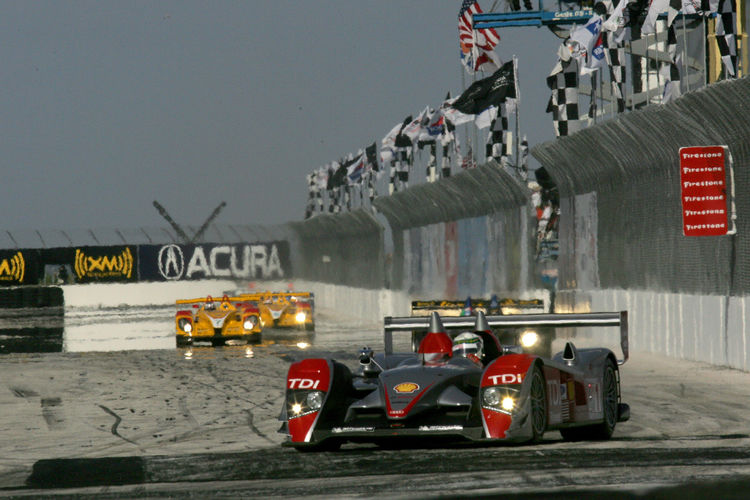 The American Le Mans Series is moving along at a rapid pace: With Long Beach (California) and Houston (Texas) coming up, as many as two city races are on the agenda within just one week – putting the Audi R10 TDI, which has remained unbeaten so far, to the test yet again.

By claiming a one-two victory in St. Petersburg (Florida) Audi proved that the revolutionary diesel-powered sportscar is also capable of winning on a street course. The circuits in Long Beach and Houston, however, have different characteristics than the track in St. Petersburg. This means that the Audi Sport North America team is facing two other big challenges.

The drivers and technical crews have to master a particularly tough task in Long Beach: Before the qualifying, the teams have merely 45 minutes of practice to familiarise themselves with the circuit that is new to all Audi drivers. The race lasts only 1:40 hours, making it the shortest in the history of the American Le Mans Series until today.

One week later, the world’s fastest sportscars will be competing on the city circuit in Houston, which Dindo Capello and Allan McNish know from last year’s victory in their Audi R8. For Emanuele Pirro and Marco Werner, though, Houston is new territory. The circuit is the slowest one on the 2007 American Le Mans Series schedule with an extremely bumpy surface.

After the 1-2 victory in St. Petersburg, there was no time for the Audi squad to catch their breath: While the drivers flew back to Europe for testing in France for the 24 Hours of Le Mans on 16/17 June, Dave Maraj’s Team Audi Sport North America had only three days to prepare the two R10 TDI sports prototypes for the next race. As early as on Thursday the trucks left the team’s base in Pompano Beach in Florida to travel the 2,700-mile distance across the United States to the West Coast.

Long Beach is host to the American Le Mans Series for the first time. For Audi Sport, though, this round marks the return to a special venue: In April 1988, Audi contested its début race with the 200 quattro TransAm – after changing from rallying to circuit racing – on the street course near Los Angeles. At that time, Audi caused a big sensation with its quattro drive, while today it is TDI Power that is making the headlines in the United States.

Quotes before Long Beach and Houston

Dr Wolfgang Ullrich (Head of Audi Motorsport): “The Audi R10 TDI has now been undefeated in ten races, and for more than a year – that’s a unique track record. We’re aware of the fact that this string of exploits will end at some point, particularly since the competition in the American Le Mans Series keeps getting stronger. But we’re going to give our best again in the upcoming two city races in Long Beach and Houston, and show the capabilities of the R10 with Audi TDI Power to the spectators in California and Texas.”

Dindo Capello (Audi R10 TDI #1): “I can’t say much about Long Beach because I’ve never been there. It’ll be a very short race over just 100 minutes. I was told that there’s a very tight hairpin. This should be pretty difficult for our – due to the regulations – heavy R10 TDI, although we showed in St. Petersburg that we can win even when the theory is against us. This was also the case with the R8 last year in Houston. This track is a lot bumpier than the one in St. Petersburg. The key in Houston will be to find a good set-up for handling the bumps.”

Allan McNish (Audi R10 TDI #1): “The St. Petersburg victory certainly gave us a bit more confidence looking ahead at the next two races. However, it is cautious optimism, simply because I think the competition did not get everything one-hundred-percent right in St. Petersburg, while we did. Looking at Long Beach, this is a fantastic venue, very historic and probably with a good balance of tight corners and straights. Houston is significantly different, very tight, twisty, with no long straights where our Audi R10 TDI can stretch its legs. The competition from Porsche and Acura/Honda will be very strong. However, after the victory in St. Petersburg, we’re looking forward to this challenge.”

Emanuele Pirro (Audi R10 TDI #2): “Long Beach is another street event and thus another less than perfect one for the Audi R10 TDI. We proved in St. Petersburg that even if the odds aren’t in our favour on a street circuit we can turn them around. So I look at Long Beach with some optimism, but we shouldn’t forget that our car is built for high speed and fast corners and not for street races. So far, though, we’re looking good and will try to double the East Coast results on the West Coast.”

Marco Werner (Audi R10 TDI #2): “Long Beach and Houston are new territory for me – I don’t know either of these circuits. The Audi R8 competed in Houston before, but the R10 TDI is in for two new tracks. Nevertheless, we’re going to this race with a slightly better feeling than to St. Petersburg because, there, things went better for us than expected. The Audi R10 TDI proved that it’s a reliable car on street circuits as well. If we don’t make any mistakes – which is easier said than done on a city circuit – we’ll be able to achieve a good result.”

Dave Maraj (Team Director Audi Sport North America): “I don’t want the St. Petersburg victory to make our team overly confident. We have to work as hard as we did to win in St. Petersburg. Going into the next street races, I’ll make sure that we invest the same level of work and attitude we did in St. Petersburg.”

The schedule in Long Beach

The schedule in Houston