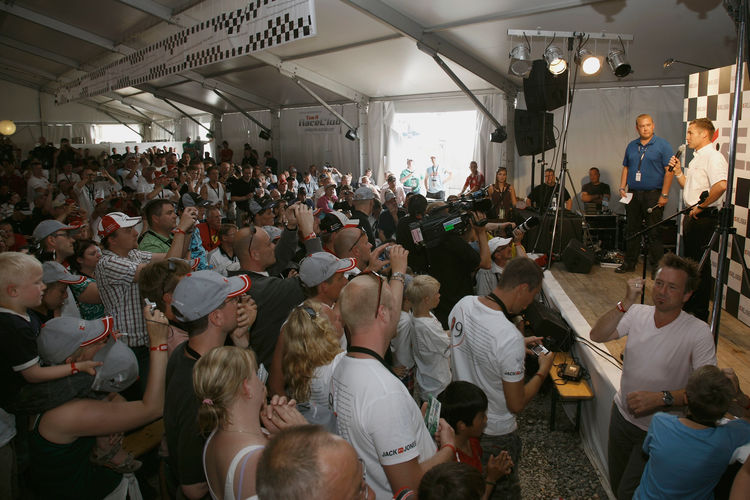 “The Le Mans 24 Hours have been held since 1923. And over the years the question of which car can cover the longest distance in 24 hours has made Le Mans develop into one of the world’s biggest sporting events that keeps attracting increasingly large crowds.

Over 230,000 fans flock to Le Mans every year. Traditionally, they’ve included a particularly large number of Brits, fans from the Benelux countries and Frenchmen. But Denmark has been represented with a large turnout that’s out of proportion for the size of the country for some years as well. This time, more than 25,000 of my fellow countrymen are expected at Le Mans! That’s incredible for a small country like ours. My team-mates keep joking that Denmark must be pretty empty in mid-June ...

Last year, I took Allan (McNish) and Dindo (Capello) with me to one of the Danish camps on Friday. Over 3,000 of my compatriots were in a single tent there – that was a fantastic experience!

Le Mans has long become an institution in Denmark. Obviously, this has a lot to do with the major exploits other Danish drivers and I have clinched at Le Mans. If Michael Schumacher hadn’t celebrated his victories in Formula 1 but at Le Mans, I’m sure that interest in Germany would be just as high.

But this way, Germany still has a bit of catching up to do compared with other countries in the world. In Asia, particularly in Japan, and in the United States as well, Le Mans is a very important event. A large number of fans there watch the race on TV because they’re impressed with the grueling demands made on the technology and the people involved over such a long time.

But nothing compares with a live experience of Le Mans on location. Le Mans is truly a motorsport festival that offers incredible variety to the fans. Most of them spend a whole week there and never get bored. Concerts, exhibitions, parties – people can have a lot of fun at Le Mans and many spectators are there for the special party atmosphere as well. Obviously, most of the fans are interested in the race, though. Even I am always impressed with how much the spectators we meet there know about us drivers and the cars. They’re real experts and they also take the time to visit the museum and the exhibitions!

Most of the spectators share an enthusiasm for race cars and cars in general. The great thing is that there are so many different classes, vehicles, engines and tires in the field and that the crowd gets to constantly watch overtaking maneuvers. Le Mans is the most spectacular overtaking show in motorsport. Obviously, every fan has certain drivers, teams and brands they support but what all of them have in common is their enthusiasm for Le Mans and for motorsport.

Another great thing for motorsport enthusiasts is that they can move around pretty freely during the race and get into close contact with us in the paddock. I never sign as many autographs as I do at Le Mans. As Audi drivers, we’re particularly well known there due to our exploits at Le Mans and interest in us is huge. It’s an enormous responsibility to find a middle-of-the-road approach: being friendly and open while staying fully focused on the race.

I truly enjoy the fans’ interest. And even in the cockpit I notice the crowd lining the track and the fans’ rhythm. At night, you can catch a whiff of barbecue, especially in the area of the Arnage corner. Later into the night the action in the stands calms down a little. And on Sunday morning you can even see spectators at sleep. They simply succumb to fatigue although that’s when the race is often particularly thrilling.

Just before the end of the race the stands around the start and finish are really filled with life and action again. But the greatest thing is to stand on the podium after winning at Le Mans and to look down on the huge crowd that has assembled in the pit lane and on the start-finish straight. When you stand there, you’ve achieved something very special together with your team. And the combination of adrenaline, fatigue and exhilaration makes for a fantastic atmosphere that we enjoy together with the crowd.

But as I said before: you’ve simply got to experience Le Mans yourself – and that doesn’t just apply to Danes!”