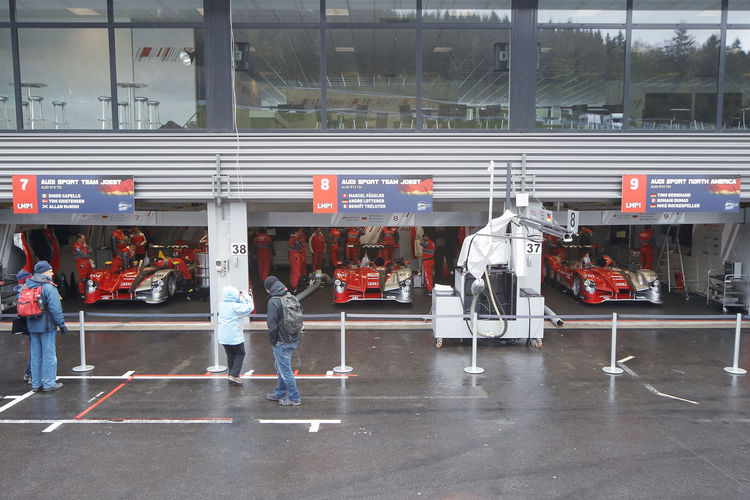 “Le Mans is coming closer in really big steps now. There are just 36 days left before the race starts at 3 p.m. on June 12. This weekend the Le-Mans dress rehearsal at Spa-Francorchamps is on the agenda for us – and in a way it's the hour of truth. In direct competition with our strongest rivals we'll get the first answers about where we stand with our R15 plus.

But no matter what the outcome of the race on Sunday will be: the result cannot exactly be applied to Le Mans because the track layouts are simply too different. At Le Mans we achieve even much higher speeds and at Spa there are a few compressions which require a totally different set-up. And in contrast to Peugeot we are racing in full Le Mans spec with much less down force than you normally run at Spa.

Still, the race is an important step on the way to Le Mans for Audi Sport Team Joest and for all of us. It's the first real racing commitment of the year for the whole squad because when Allan (McNish) and Dindo (Capello) raced at Le Castellet a few weeks ago, only one car was entered – this time, all three cars and all nine drivers are contesting the event.

Needless to say, we'd have liked to compete in the 12-hour race at Sebring too. But it's really great that we're having our Le Mans dress rehearsal at Spa this year. I don't know a single race driver who is not excited about Spa. This circuit that nicely blends in with the landscape really gives you a lot as a driver. The combination of fast and slow corners and compressions is unique. The track at Spa has a beautiful rhythm – provided you find it ...

It was a fantastic feeling to arrive at the paddock yesterday afternoon, to see the many teams and hospitalities and to feel that we're in for an exciting race. Interest by the media is huge too. A really large number of journalists have accredited themselves.

As is often the case, the weather might play a major part. I don't think I've ever experienced a race weekend here without rain. And yesterday when we arrived at Spa it was raining too. Obviously, it would be better to have dry conditions for our preparation for Le Mans – but we'll take things as they come. Generally, rain at Spa is a big challenge for the drivers.

After the 30-hour test at Le Castellet I rode my bicycle a lot and did everything to keep strengthening my injured foot. I've still got some pain in certain situations and some swelling but basically things are looking pretty good. Everything else will be taken care of by Audi's physiotherapist Paul Bandus with a taping.

Last weekend I had the honor of unveiling the new Audi R8 GT together with Audi's CEO Rupert Stadler and Werner Frowein, the managing director of quattro GmbH, at the historic Grand Prix in Monaco. After four laps on the Grand Prix circuit in Monaco I'm sure that the production volume, which is limited to 333 cars, will be sold out very quickly.

The presentation of the R8 GT was also attended by Jacky Ickx and Hans-Joachim Stuck who drove some historic Auto Union vehicles. And of course the conversation quickly turned to Le Mans and our dress rehearsal at Spa ...”