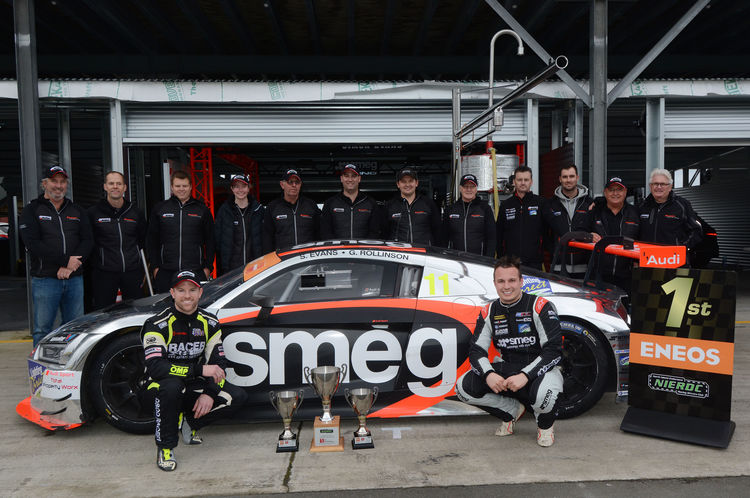 An Audi customer on the other side of the world celebrated the biggest success of the weekend: Smeg Racing won an endurance championship in New Zealand with the Audi R8 LMS.

Title success on New Zealand’s North Island: Simon Evans/Gene Rollinson won the North Island Endurance Series with a victory at the finale. The two New Zealanders won the round at the Pukekohe circuit with a twelve-second advantage after three race hours in an Audi R8 LMS from Smeg Racing. Evans had already clinched a title with Audi for the first time in April, winning the 2016/2017 3-Hour New Zealand Endurance Championship.

First victory of the season for title-defenders: On the dune circuit of Zandvoort, Christopher Mies/Connor De Phillippi took their first victory of the 2017 ADAC GT Masters. The title-defenders from the Montaplast by Land-Motorsport team are therefore also the first drivers to win with an Audi R8 LMS in the German GT3 series this season. Starting from eighth, the German-American duo prevailed with a champagne driving performance in the Dutch rain. Team principal Wolfgang Land had double reason to celebrate: Christopher Haase/Jeffrey Schmidt completed a 1-2 victory for the Niederdreisbach-based team. On the day before, Kelvin van der Linde/Markus Pommer from Aust Motorsport scored another podium result as the second-best team in the race.

Seven trophies in Australia: The Audi customers could not be beaten on the fourth race weekend of the Victorian State Circuit Racing Championships in Australia. On the Sandown circuit, Matthew Stoupas won all three race rounds in an Audi R8 LMS ultra. In the first race, another Audi driver stood on the podium with Ross Lilley in third, whilst Richard Mensa took another trophy in the second round with second place. In the third and final round, Ross Lilley finished second, whilst Richard Mensa and Gary Higgon finished in the following two places, completing a 1-2-3-4 victory for Audi.

Third in Austria: Flick Haigh and her teammate Joe Osborne celebrated a podium in the Alps. On the Red Bull Ring, the two British drivers drove to third place in the GT3 class in the third round of the Michelin Le Mans Cup in an Audi R8 LMS from Optimum Motorsport. This brought the driver duo up to third in the GT3 rankings after the fourth of seven races.

Podium in Zandvoort: An Audi privateer driver lifted silverware at the fourth event of the Spezial Tourenwagen Trophy in the Netherlands. In the Sunday race, Andreas Schmidt achieved second place in the K2 class on the dune circuit on the North Sea in an Audi R8 LMS ultra.

1-2 victory for the Audi RS 3 LMS in the ADAC TCR Germany: After Niels Langeveld became the first Audi driver to take victory in the ADAC TCR Germany at the beginning of the month, he had cause for cheer once again. On Sunday, the racing driver from the racing one team celebrated his second victory within two weeks in front of his home crowd at Zandvoort. In doing so, he has now climbed to third on the table. A second Audi driver crossed the line just three and a half seconds behind Langeveld: the South African Sheldon van der Linde from the AC 1927 Mayen e.V. im ADAC team also steered an Audi RS 3 LMS.

Podium on the Nordschleife: For the first time, an Audi RS 3 LMS achieved a podium-finish in the RCN Circuit Challenge Nürburgring. Kevin Kratz finished third in the KL_RS 3 A class in the fifth round of the series on the Nürburgring’s Nordschleife. The competition combines the elements of regularity and sprint races in one event, with three set-time laps, nine best-time laps and two maximum-time laps.