Skip to content
We are using cookies for a better user experience.
11/11/19
Neuburg a. d. Donau
Sports 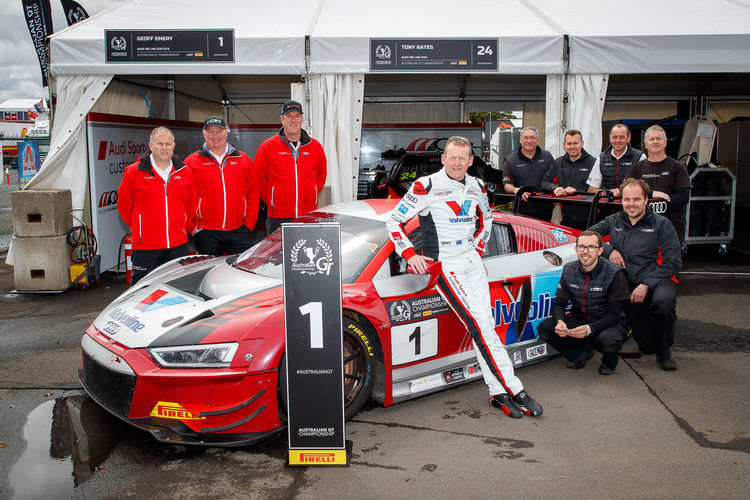 Resounding success in Australia: Geoff Emery in an Audi R8 LMS has won the Australian GT Championship for the third consecutive time. In the finale at Sandown, the Australian with Team Valvoline celebrated his third victory this season, in the third sprint race with a 3.6-second advantage. In September, the privateer driver had celebrated his first title win this year: together with Garth Tander, he decided the Australian Endurance Championship in his favor in an Audi R8 LMS. As a result, Audi Sport customer racing and the Melbourne Performance Centre fielding team have experienced their so far most successful season on the fifth continent because never before have both titles gone to an Audi driver. Consequently, Audi is continuing a tremendous string of success: Mark Eddy, in 2011, won the Australian GT in an Audi R8 LMS for the first time; in 2015, the championship win went to Audi Sport driver Christopher Mies, plus in 2017, 2018 and 2019, to Geoff Emery.

Class victory in Spain: David Serban in the finale of the Campeonato de España Resistencia at Barcelona won his class for the fifth time in an Audi R8 LMS GT4. As a result, the Romanian from the Willi Motorsport team is also the winner of Class 3 in the Spanish endurance racing series.

First victory in South Africa: The Audi R8 LMS GT4 clinched its first victory in Africa, in its second event there. In the finale of the South African G&H Transport Extreme Supercars racing series, Marius Jackson in the first race on the circuit at Zwartkops won Class D. In the second race, he finished runner-up, which in the aggregate of both races made him the weekend winner in his class.

Runner-up finish at Sebring: In the Michelin IMSA SportsCar Encore endurance race, Team CarBahn with Peregrine Racing finished the GT4 class runners-up. Sameer Gandhi/Tom Dyer had shared the cockpit of the Audi R8 LMS GT4 during the four-hour race at Sebring. The race was a stand-alone event without championship status. Previously, Steve Dinan’s team had secured the GS title in the regular IMSA Michelin Pilot Challenge series with the Audi R8 LMS GT4.

First title in the Super Taikyu Series: In the Super Taikyu Series finale in Japan, Team BRP achieved a major coup with the Audi RS 3 LMS. While the first three teams in the TCR standings were separated from each other by merely half a point, the BRP squad traveled to Okayama in the fourth spot of the table. With pole position in qualifying, Yuya Ota/Takeshi Matsumoto/Takuro Shinohara underlined their claim to a top result. About halfway into the three-hour race, the number 19 Audi RS 3 LMS took the lead in its class and would not relinquish it anymore. Audi only pitted twice, whereas its main rivals made three service stops. Yuya Ota/Takeshi Matsumoto/Takuro Shinohara ultimately won their class with a 1.26-minute advantage. Wimarama Kizuna Racing Team with another Audi RS 3 LMS finished at Okayama in third position. As a result, the Audi RS 3 LMS won its class in four of the six endurance races of the mixed sports and touring car racing series, which included a success in the 24-hour race at Fuji. In the end, Team BRP had a 10.5-point advantage in the standings over the Honda squad of Modulo Racing. For the Audi RS 3 LMS, this marked the fifth title this season and the eleventh in total since the race car had entered its maiden season in 2017.

Honors in Neuburg an der Donau: For the third time, Audi Sport honored its best drivers at the Audi Sport customer racing Race Night. Some 200 guests from America, Asia and Europe had traveled to Neuburg on November 8. The most successful contenders received their prizes in the presence of Oliver Hoffmann, Managing Director of Audi Sport GmbH, and Chris Reinke, Head of Audi Sport customer racing. In a dynamic presentation, Audi Sport also publicly unveiled the new Audi R8 LMS GT4 for the 2020 season and announced the basic outline of its program for next season, which will continue to include the Intercontinental GT Challenge and thus the 24 Hours of Spa, plus participation in the 24 Hours of Nürburgring.