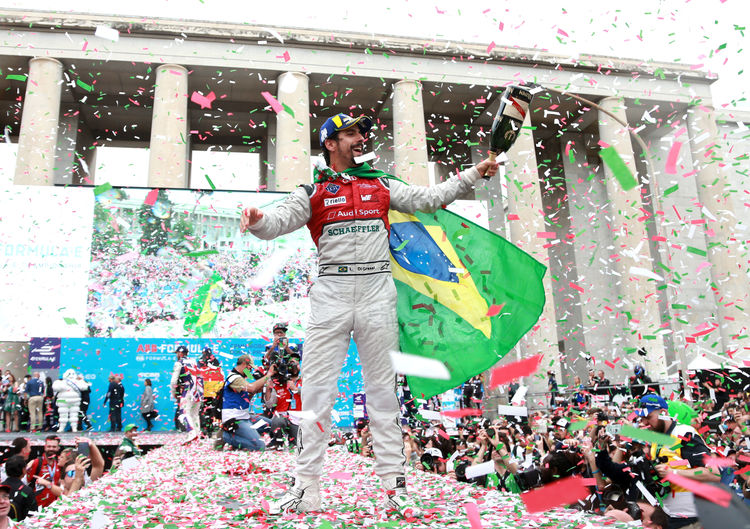 Lucas di Grassi and Daniel Abt clinched positions two and four for Team Audi Sport ABT Schaeffler in the first Formula E race in Rome and thrilled the spectators in the Italian capital with fightbacks.

Following a less than perfect qualifying, the two Audi drivers had to settle for grid positions six and nine on the new race track. After a small mistake on his timed lap, Lucas di Grassi just barely missed the “Super Pole” of the five fastest. Daniel Abt did not get his tires to work optimally in qualifying.

However, both Audi drivers were convinced that they had fast cars for what has been the longest race of the current Formula E season to date. In front of a crowd of some 30,000 enthusiastic fans and the eyes of Audi CEO Rupert Stadler, they impressively proved that they did.

Abt and di Grassi skillfully saved energy in the first half of the race, so being able to drive one more lap than most of their competitors. Following the pit stops, both recovered a deficit to the front runners of more than ten seconds, battling their way forward position by position with spectacular overtaking maneuvers. Shortly before the end of the race, di Grassi even caught up with race leader Sam Bird and fought a fierce battle for victory with the Briton which in the end he missed by only 0.970 seconds.

“I’m overjoyed to have clinched a podium for Audi in the successful Formula E premiere in Rome,” said di Grassi. “After the start, I was only in eighth position, so second in the end is simply fantastic. It was an outstanding race that I’m very happy with. Thank you to Audi and everyone who voted for me in the FanBoost, which helped me to overtake Sébastien Buemi today.”

Daniel Abt overtook his teammate at the start, but dropped behind di Grassi again due to a slower pit stop. In addition, he lost radio contact with the pits in the first half of the race. “As a result, I was completely on my own out there and had no information about energy management,” said Abt. “I was fast anyhow and with the second car, fortunately, everything was okay. Sébastien (Buemi) and André (Lotterer) didn’t make life easy for me. I lost a lot of time behind those two before being able to overtake them. Just one lap longer and I might even have finished on podium. But, as it is, we can be proud of having scored important points after starting from position nine and of having set the fastest race lap.”

“My heart was beating like crazy during this race,” said Team Principal Allan McNish. “It was incredibly close in the end and there was no way to tell whether Lucas would win or finish third. It turned out to be second, plus fourth position and the fastest race lap for Daniel – we’re very happy and already looking forward to the next race in Paris.”

“It was a fantastic start of the European season,” said Head of Audi Motorsport Dieter Gass. “The location in Rome is incredible and the track very nice. The race was action-packed and ended well for us. In view of our grid positions, it was an excellent race for Audi.”

Daniel Abt, now with 50 points to his tally, improved to fifth position in the overall classification of the ABB FIA Formula E Championship, Lucas di Grassi to eighth (39 points). In the teams’ standings, Audi Sport ABT Schaeffler moved up to position four. With 31 points the team was the most successful one in Rome.

The next E-Prix will take place in just two weeks’ time (April 28) in Paris. There the futuristic Audi e-tron Vision Gran Turismo will be deployed again as well. The electric race car concept made a much-noted debut in Rome as a race taxi during Formula E. Among the passengers in Rome were Formula E CEO Alejandro Agag and Audi CEO Rupert Stadler.