Successful first half of the 2015 Audi Sport TT Cup 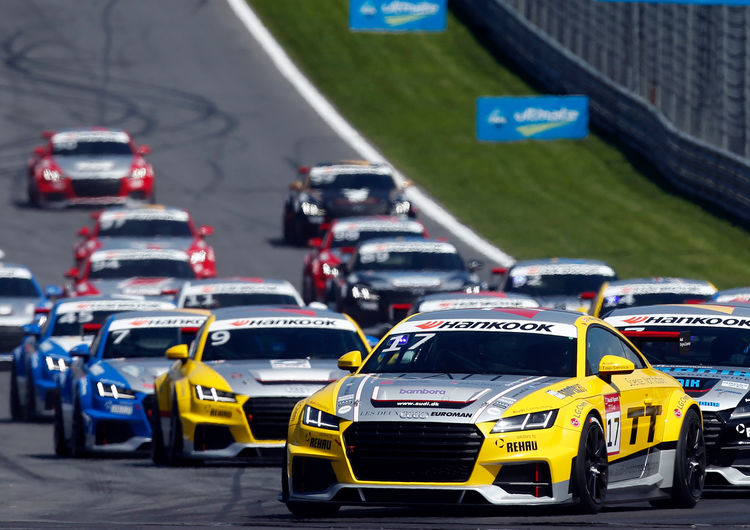 Successful assessment of the first half of the 2015 Audi Sport TT Cup: The new Audi one-make cup captivates thousands of fans at the race tracks and in live streaming with thrilling motorsport. The prominent guest entrants are enthusiastic about their racing commitments in the DTM’s supporting program as well.

“The young drivers have been doing a great job right from the beginning and delivering tremendous motorsport to the spectators,” says Project Leader Rolf Michl. “The season opener at the Hockenheimring was an outstanding premiere and the feedback from members of the media and the fans was very positive. The subsequent races at the Norisring and at Spielberg gave us a lot of highs too – as well as a setback with the severe accident at the Red Bull Ring.”

The second race at Spielberg had been started behind the safety car due to heavy rain and given the all clear by race control after four laps. Due to the poor visibility an accident occurred under green flags involving six drivers – including Levin Amweg. The Swiss sustained a back injury and had to be hospitalized. “We’re wishing Levin all the best and hope that he’ll soon be able to race again,” says Michl. “We’re carefully analyzing the accident. We can already say this much today: the safety concept of our car functioned.”

The participation of the VIP guest entrants attracted additional attention in the first half of the season. They included the noblemen Pierre Casiraghi (MC) and Prince Albert von Thurn und Taxis (D) as well as the ski stars Felix Neureuther (D), Aksel Lund Svindal (N) and Marcel Hirscher (A) competing in the cup race car. All of them expressed their enthusiasm after the race weekends. “If I was invited again next year, I’d immediately accept,” said the four-time overall World Cup winner Hirscher.

In the overall classification of the permanent entrants, Nicolaj Møller Madsen is in the top spot halfway through the season. The Dane has 111 points and finished on podium in five of the six races. He is trailed by Jan Kisiel (99 points) and Dennis Marschall (87.5).

The other events on the 2015 Audi Sport TT Cup calendar: