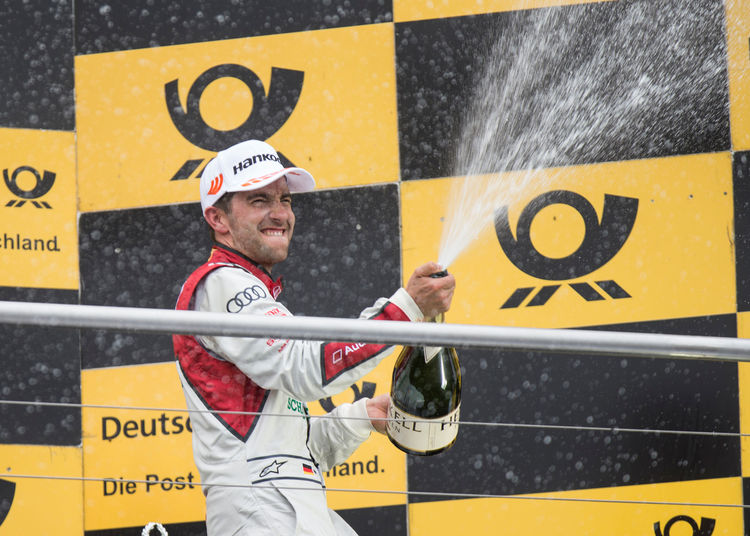 From grid position 16 to third place: in the DTM season opener at the Hockenheimring, Mike Rockenfeller thrilled Audi fans with a comeback drive and clinched a podium result for the new Audi RS 5 DTM in its debut race. Similarly strong performances were shown by Mattias Ekström and René Rast.

Disappointment after qualifying, cheers after the race: the squad led by Head of Audi Motorsport Dieter Gass experienced an emotional roller coaster on race day one of the 2017 DTM. Following a difficult qualifying session, Nico Müller started from grid position eight as the best Audi driver. The two former DTM Champions Mike Rockenfeller and Mattias Ekström had to settle for grid positions 16 and 17 and René Rast even had to start from the pit lane after the passenger’s door of his car had been flung open on the formation lap.

However, in the race, all three Audi campaigners were able to show the potential of the new Audi RS 5 DTM – particularly over the race distance and with different strategies. Mike Rockenfeller changed tires very early, René Rast shortly before the race’s midpoint, and Mattias Ekström only ten laps before the end of the race. At the finish, the three Audi RS 5 DTM cars of the three Audi Sport teams, Phoenix, Abt Sportsline and Rosberg, were in positions three, five and six, separated by only 2.5 seconds.

The happiest campaigner following the spectacular race was Mike Rockenfeller who in the DTM had most recently finished in the top three in the 2015 season. “Being on podium again and taking a trophy home is mega cool,” said “Rocky.” “From 16th on the grid, that couldn’t be expected. We deployed all our skills. The strategy was great and we also had a little fortune. I don’t mind taking these points home. Thank you to the team!”

Mattias Ekström forfeited a better grid position by making a mistake in qualifying, but made up for it in the race. The Swede only needed four laps to advance from position 17 on the grid into the top ten, overtook one rival after the other following a late tire change and did the fastest race lap as well. With Nico Müller in position nine, a total of four Audi drivers finished the season opener in the points. The Swiss lost some time during his pit stop and a better position due to an issue with his left rear wheel.

Loïc Duval in his first DTM race came in 14th place after having started from the very rear of the grid. Jamie Green, in a battle for position ten in the early stage, collided with Maro Engel. Following a drive-through penalty, the Briton saw the checkered flag in 18th place.

“After the disappointing qualifying, we can be very happy with the race today,” said Head of Audi Motorsport Dieter Gass. “We put four cars into the points and three into the top six. From our grid positions, we could have hardly achieved more. It was a superb race and with the changes in the regulations we achieved what we’d been planning to achieve. Congratulations to Lucas Auer – but the true winners today are the DTM fans.”