Spoiled for choice in the Audi Sport TT Cup 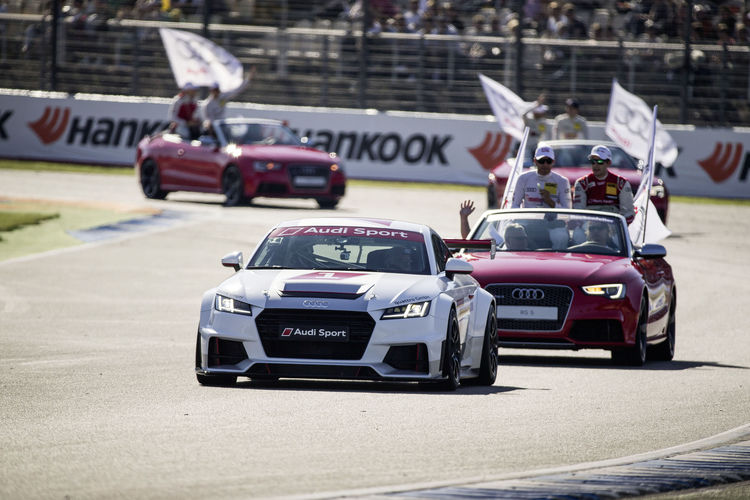 The organizers of the new Audi Sport TT Cup to be held as part of the DTM starting in 2015 are spoiled for choice. 165 applications from 30 nations have been received by quattro GmbH for the 18 available slots. The tire manufacturer Hankook is the first partner of the Audi one-make cup.

“Worldwide interest in the Audi Sport TT Cup is overwhelming,” says Project Leader Rolf Michl. “The first application was received shortly after the world premiere at Hockenheim and our phones have constantly been ringing ever since. We’re not only delighted about the large number of registrations but, above all, about the quality and international attention. Based on this, we’re going to put together a tremendous field of entrants for the inaugural season.”

As expected, the majority of the applicants are from Germany and Europe. With a total of twelve registrations North America is strongly represented. Applications from Australia, Brazil, China, Columbia, Mauritius and South Africa have been received as well. The youngest candidate has just turned 16. 19 registrations have been submitted by women.

In the Audi Sport TT Cup, Audi provides young international drivers an opportunity to enter motorsport. The 18 slots will be awarded in a multi-stage selection process.

Up to 50 candidates are invited to an initial evaluation course to be held at the Audi driving experience center in Neuburg an der Donau on December 12 and 13. Among others, Audi Sport TT Cup coach Markus Winkelhock, Le Mans winner Marco Werner and the former rally driver Sepp Haider are members of the judging panel. The three racing pros will be accompanying the young drivers in the 2015 season as well.

In the the tire manufacturer Hankook that is known from the DTM, the first partner of the Audi Sport TT Cup has now been determined as well. Effective immediately, the company supplies the original tires for all factory-delivered Audi TT* and TTS* cars, which made it a logical choice for the new one-make cup of AUDI AG as well.

“Tires are very important in motorsport and will be playing a major role in training our young race drivers,” says Rolf Michl. “Hankook has an enormous wealth of know-how and is a perfect partner for the Audi Sport TT Cup.”

“We’re delighted about the opportunity to extend our motorsport commitment with this attractive new Audi one-make cup,” adds Manfred Sandbichler, Motor Sport Director Europe at Hankook. “The tires we’re delivering for the production Audi TT embody technologies that are used in the DTM as well. The participants of the Audi Sport TT Cup are going to profit from them too.”

The racing version of the new Audi TT delivers 228 kW (310 hp) with a weight of only 1,125 kilograms. By means of a so-called push-to-pass function the power output of the two-liter TFSI engine can be briefly boosted by 22 kW (30 hp). All cars will be centrally fielded by quattro GmbH.

** The fuel consumption and the CO2 emissions of a vehicle vary due to the choice of wheels and tires. They not only depend on the utilization of the fuel by the vehicle, but are also influenced by driving behavior and other non-technical factors.