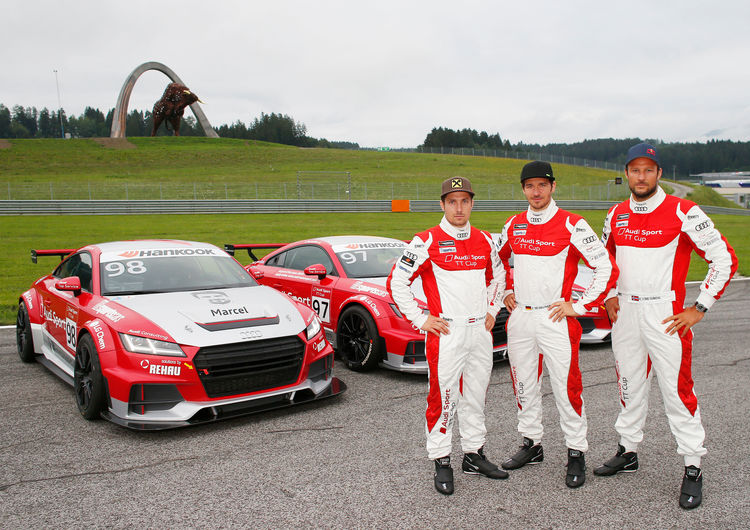 The Audi Sport TT Cup at Spielberg again proved that the Audi one-make cup stands for balanced and competitive racing. At the Red Bull Ring, Jan Kisiel (PL) claimed victory in the first race on Saturday. Round two on Sunday was started under difficult conditions in rain and stopped after an accident – Alexis van de Poele (B) was classified as the winner.

Six races, six winners. Even after the third race weekend there is still no double winner in the Audi Sport TT Cup. Jan Kisiel prevailed in race one on Saturday in perfect external conditions in front of Dennis Marschall (D) and the overall leader Nicolaj Møller Madsen (DK). After two second places at the Norisring, Kisiel mounted the top of the podium for the first time.

Before the second race on Sunday, rain came pouring down at Spielberg. Due to the difficult weather conditions the race was started behind the safety car and released after four laps. Subsequently, under green flags, an accident occurred in which six drivers were involved. The race was stopped and not restarted. The stewards of the meeting classified Alexis van de Poele, who was leading the race when it was stopped, as the winner. As less than half of the race distance had been covered, the drivers were awarded 50 percent of the points.

“All in all, we experienced an exciting weekend that had an unfortunate ending when round two on Sunday was stopped,” says Project Leader Rolf Michl. “We deeply regret that Levin Amweg was injured in the accident and had to be admitted to the hospital where further medical examinations will be performed. The entire team of the Audi Sport TT Cup wishes him a speedy recovery and hopes that he will be able to return to the grid soon.”

Felix Neureuther (D), Marcel Hirscher (A) and Aksel Lund Svindal (N) attracted huge interest among national and international media and the large number of fans at the track. The ski stars entered the race at the Red Bull Ring as guest entrants and fought some fierce position battles. In the end, Hirscher came out on top in both races. Still, all three of the winter athletes, who are now going to prepare for the upcoming season in the alpine Ski World Cup again, tremendously enjoyed their foray into unknown territory. GT driver Rahel Frey (CH) won the guest entrants’ classification in both rounds.

After the sixth of twelve races, Nicolaj Møller Madsen continues to lead the Audi Sport TT Cup’s overall standings. The Dane has 111 points, trailed by Jan Kisiel (99 points) and Dennis Marschall (87.5). The fourth race weekend in the Audi Sport TT Cup will take place at Oschersleben on September 12 und 13.