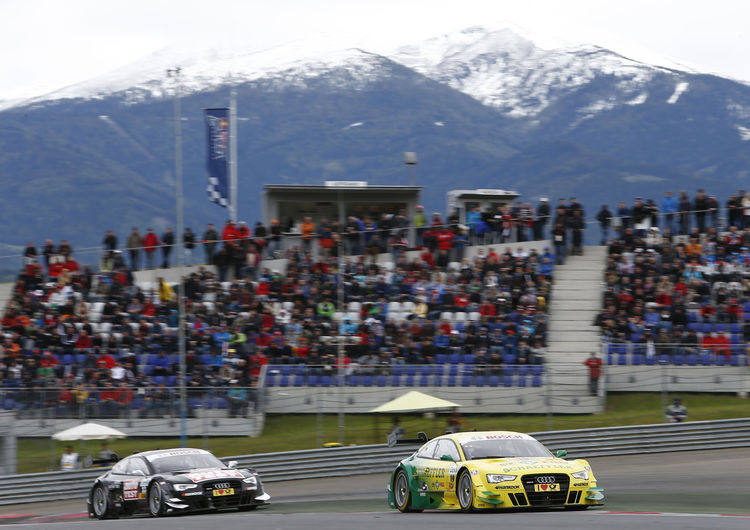 Dr. Wolfgang Ullrich (Head of Audi Motorsport): “It’s great that despite the adverse weather conditions in Austria so many spectators traveled to Spielberg. The crowd at the Red Bull Ring was truly impressive. And the fans saw another fantastic DTM race here. For us, it was a bit unfortunate today, though. We’re also far from agreeing with some of the decisions made by the race directors.”

Dieter Gass (Head of DTM): “Basically, we can of course not be pleased with this result. We didn’t travel to Spielberg to finish fourth and fifth. We did expect more than that and on Saturday things were looking as though this would be possible. ‘Rocky’ (Mike Rockenfeller) and Mattias (Ekström) squeezed the maximum out of the situation. With a strong performance and a good strategy, they managed to finish in fourth and fifth place. The problem was that we lost the three Audi cars we had at the front of the grid during the course of the race – and thus an absolutely good result.”

Mike Rockenfeller (Schaeffler Audi RS 5 DTM), 4th place
“Fourth place is basically a very good result when you’ve got to start from position 13. My team did a very good job and I want to say a big ‘thank you’ to my guys. The car was running fantastically too and I was able to fully attack. Unfortunately, I was occasionally stuck in traffic at the rear and thus lost some time, but on the whole I’m very pleased with the race and am happy about the points here at Spielberg – especially after yesterday.”

Mattias Ekström (Red Bull Audi RS 5 DTM), 5th place
“My Audi was very good, especially on option tires. On the whole, it was a big step in the right direction today. It was good to advance and score a few points. We can be pleased with the result. I’ll remember the weekend with a horrible Saturday and an amazing race.”

Adrien Tambay (Audi ultra RS 5 DTM), 11th place
“I’m pleased with my race. We’d selected a very good strategy, managed the option tires well and I was often able to overtake. Maybe we could have finished in seventh place if I hadn’t had a problem with the transmission some of the time. Now I’m very much looking forward to the next race.”

Miguel Molina (Audi RS 5 DTM), 14th place
“The race was good, but my start wasn’t perfect. Afterward, I was all the way at the rear. My pace in the race was right, and so was the strategy. Unfortunately, we only managed to finish in 14th place. But we know that we’ve got a lot of potential. Once everything works well from the beginning to the end, we’ll be able to battle for the top spot on the podium.”

Edoardo Mortara (Playboy Audi RS 5 DTM), 15th place
“I had a superb start and was able to overtake Marco (Wittmann). But unfortunately I got off the track too far and had to give up my position again. Last year, Martin (Tomczyk) overtook another car at exactly the same place but wasn’t punished for it. I don’t understand that. Still, we had a very good car and a good pace. I was able to keep up with the two BMWs in front of me for a long time – until the collision with Wittmann. After that, my race was ruined. That was very upsetting!”

Timo Scheider (AUTO TEST Audi RS 5 DTM), 16th place
“It’s frustrating not to finish the third race weekend in succession without a satisfactory result after a good qualifying session. Right after the start, Filipe (Albuquerque) caught me on the inside and I lost a few positions. Although afterward I was able to make up some ground again one of my tires suddenly started to lose air and I had to pit with a puncture. Unfortunately, we then lost the wheel nut at the last pit stop. None of this was in my hands and I’m hoping that this string of misfortune will end one day.”

Filipe Albuquerque (Audi Financial Services RS 5 DTM), 17th place
“It was a difficult race. I hadn’t expected ending up so far at the rear. Obviously, it was due to the strategy. We’ve now got to analyze what went wrong and prepare for the next race.”

Jamie Green (Red Bull Audi RS 5 DTM), 18th place
“I had a good race because initially I moved to the front from the last row of the grid. Our pace was competitive, that was positive. The problem was that we had a poor first pit stop; one of the rear wheels wasn’t tightened properly. We lost around ten seconds. We were unfortunate again, but I believe I did a good job.”

Hans-Jürgen Abt (Team Director Audi Sport Team Abt Sportsline): “Congratulations to BMW. They delivered a great show. We were closely behind them with Mattias Ekström. From position 15 to fifth place was a big step forward and our strategy was very good. Timo (Scheider) had problems with one of the option tires. He lost air and that caused him to lose a lot of ground. Unfortunately, our pit stop wasn’t optimal either. We’re going to work on this in order to further improve.”

Ernst Moser (Team Director Audi Sport Team Phoenix): “It’s incredible that we managed to advance from 13th to fourth place. If Mike Rockenfeller hadn’t have had so much traffic a podium would even have been possible. Everything was right on the mark: ‘Rocky’ drove an amazing speed, the strategy was right and the crew delivered fast pit stops. Miguel (Molina) drove a good race as well, but stalled his engine at the start and then had to follow the field. Afterward, he was really good and still finished in 14th place.”

Arno Zensen (Team Director Audi Sport Team Rosberg): “From the start on, the race was a bit unfortunate. In my opinion, ‘Edo’ (Mortara) was in front in turn one. We don’t know if it was an advantage to drive around on the outside. We’ve got to live with the decision by the race directors. But the action with Marco Wittmann was a bit much, he drove into ‘Edo’s’ car three times. Afterward, the car was crooked and we had a puncture. I can’t understand that this incident wasn’t investigated. Afterward, the race was ruined for ‘Edo.’ If you look at where Wittmann finished in the end quite a bit would have been possible for him. Filipe (Albuquerque) was stuck in traffic. We should have switched from the standard back to the option tires as well.”