Quotes after the race at Moscow 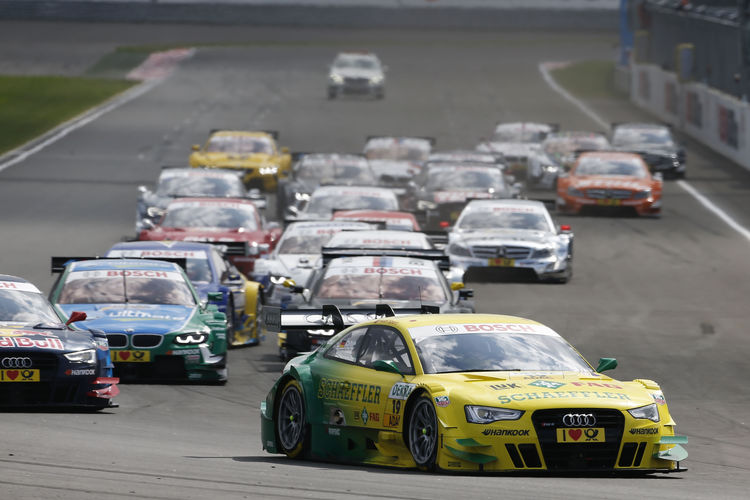 One-two victory for Audi at the DTM’s premiere in Russia – quotes after the race at Moscow Raceway.

Dr. Wolfgang Ullrich (Head of Audi Motorsport): “Russia is an important growth market for Audi. That’s why we’re particularly pleased about having been able to show the fans at the first DTM race in Russia how strong the four rings are and what performance the RS models embody. For our three teams and everybody involved in this commitment, the Russian premiere was associated with a few strains. But for Audi, Moscow was definitely worth a visit. My thanks go to all who worked hard for this success.”

Dieter Gass (Head of DTM): “The day was an absolute dream for Audi. Traveling to Moscow for the first race, clinching a one-two victory and winning the race with the Championship leader to top things off – this is a dream result for us. In addition, with four Audi cars in the top six, we delivered a solid team result. ‘Rocky’ (Mike Rockenfeller) showed a strong driving performance throughout the weekend. As at Brands Hatch, he dominated the race from the beginning to the end and did a good job of managing his tires. Mattias (Ekström) did a good job of getting over the Norisring events and showed on track today what he’s capable of.”

Mike Rockenfeller (Schaeffler Audi RS 5 DTM), 1st place
“We had a great weekend in front of a great crowd. The track was a perfect fit for Audi. My Audi RS 5 DTM was good throughout the weekend. That I was able to decide qualifying in my favor was the key to success. My guys did a superb job, the car was well prepared and both pit stops went perfectly.”

Mattias Ekström (Red Bull Audi RS 5 DTM), 2nd place
“It’s always great to be on podium, especially when you’ve got as perfect a set-up as we did today. The car was a dream to drive from the beginning to the end, I enjoyed every single lap. For the team, this success is great as well. After all it took a major effort to travel here and to drive this race. I’m sure there’ll be a little party tonight.”

Adrien Tambay (Audi ultra RS 5 DTM), 4th place
“It was great. I started from position twelve, drove the fastest race lap and finished in fourth place. I scored points for the first time this season and was able to demonstrate here that I know my job and just needed a bit of fortune.”

Jamie Green (Red Bull Audi RS 5 DTM), 6th place
“A successful Moscow premiere in every respect. We’ve now got a new race track on the DTM calendar and I’m already looking forward to returning. Personally, though, I’d prefer driving the long track configuration. My race didn’t go quite so well. Although I advanced to third place during the race we were lacking speed in the end and that’s why I only finished in sixth place.”

Timo Scheider (AUTO TEST Audi RS 5 DTM), 9th place
“After the start, I lost two positions in an incident of body contact with Joey Hand. On standard tires and later on option tires, I got stuck in traffic for a long time and thus wasn’t able to drive my pace. Unfortunately, we lost a second at each of the two pit stops but in ninth place we finally scored some points again. Congratulations to Mike (Rockenfeller). He deserves being where he is at the moment.”

Filipe Albuquerque (Audi Financial Services RS 5 DTM), 12th place
“I had a pretty good start and we managed to make up some ground with the pit stops. But in the end I was lacking the speed to move farther toward the front. All in all, it wasn’t a particularly thrilling race for me.”

Edoardo Mortara (Playboy Audi RS 5 DTM), retirement
“This has been my worst race weekend this year. We clearly stayed below our potential and have now got to analyze why.”

Miguel Molina (Audi RS 5 DTM), retirement
“It was a short race for me. I had a good start but when I tried to get past Bruno Spengler it was too tight and we touched each other. My car was damaged at the front and that meant the end of my race. The positive thing for me is that I had a good qualifying session. That puts me in a positive mood for Phoenix’s home race at the Nürburgring.”

Hans-Jürgen Abt (Team Director Audi Sport Team Abt Sportsline): “A perfect premiere of the DTM in Russia that we really enjoyed. ‘Well done’ to Mike (Rockenfeller), as well as to Mattias (Ekström), who no doubt would have deserved victory too. All of our four drivers scored points today – that’s the result of a perfect strategy, great pit stops and a strong showing by the four guys in the cockpit. I’m proud of the whole team. We intend this to mark the beginning of a strong second half of the season.”

Ernst Moser (Team Director Audi Sport Team Phoenix): “The race weekend started brilliantly. We were constantly in the pace from free practice through to qualifying. In the race, we continued to put this on track. Mike (Rockenfeller) drove flawlessly. Our strategy was good, we had everything under control and were able to schedule our pit stops the way our competitors did. A big ‘well done’ to ‘Rocky’, to the team and to Audi. We’ll be traveling to our home track at the Nürburgring as the leaders of the standings. It’s a shame that the race was over after the third lap for Miguel (Molina). His strategy of starting on option tires was right but unfortunately the steering was damaged in a collision. He, too, needs a success experience but we’re going to work on that at the Nürburgring.”

Arno Zensen (Team Director Audi Sport Team Rosberg): “Congratulations to Audi, ‘Rocky’ (Mike Rockenfeller) and ‘Eki’ (Mattias Ekström). Our race was over right after the first lap; Edo’s (Mortara) car was damaged. We subsequently had to quit as otherwise the hood would have come off. Filipe (Albuquerque) drove a brave race but having started from as far at the rear as he did there wasn’t a lot that could be done.”