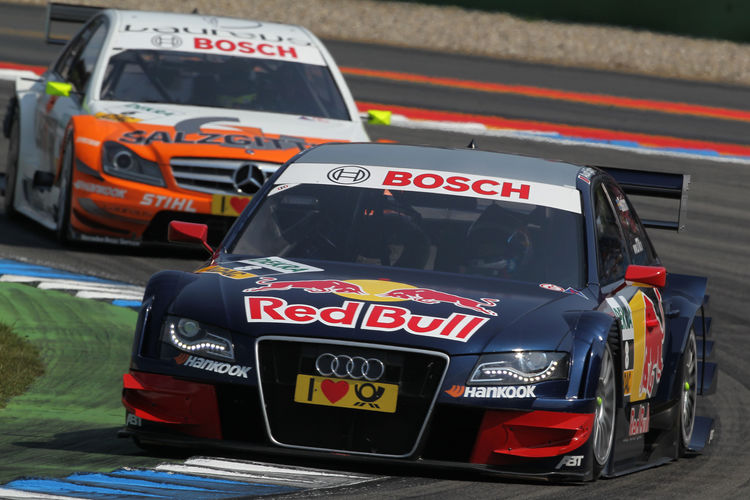 Mattias Ekström clinched a podium result for Audi at the season opener by finishing as the runner-up. Timo Scheider and Martin Tomczyk showed strong performances as well. Quotes from the Audi drivers after the race at Hockenheim.

Dr. Wolfgang Ullrich (Head of Audi Motorsport): “At the race today we’ve seen a similar picture as we did yesterday in qualifying. Bruno Spengler was just a little bit faster. Behind him the whole field was very close together. Mattias (Ekström) and Timo (Scheider) squeezed the maximum out of their potential. Martin (Tomczyk) was very quick in his year-old car too. Naturally, the safety car mixed up the situation quite a bit – but that’s part of racing. All in all, it was an interesting opening round which promises an exciting season.”

Mattias Ekström (Red Bull Audi A4 DTM #8), 2nd place
“Obviously, winning feels better than anything else. Today we achieved second place – that’s nearly perfect, but not completely. We had a car to be in contention for victory – particularly after my good start. But Bruno (Spengler) simply overtook me flat-out on the outside of turn one alongside the track. I was running flat-out too but he had more momentum that way and was able to pass me again. I didn’t think that this was okay. It was the crucial moment of the race because we were almost equally quick. Toward the end the situation became really exciting once more. A few turns before the finish something broke on my rear suspension. But this time I was luckier than in the years before – maybe that’s a good omen for the 2011 season.”

Timo Scheider (AUTO TEST Audi A4 DTM #4), 4th place
“P4 is a result I can live with today. Right at the start I had body contact at the rear when I was pushed against the car in front of me. As a result, the front of my car was damaged. At the rear I lost a few flics. That was not helpful for balance. That’s why I’m pretty happy to have finished in fourth place.”

Martin Tomczyk (Schaeffler Audi A4 DTM #14), 5th place
“We were competitive this weekend from the outset. The driver, the car and the team – all three of these have always got to fit together. This was definitely the case here. It was also huge fun to be driving a DTM race again, particularly the overtaking maneuvers I had. The duel with Maro (Engel) was tough but friendly. I feel that that’s the way a fight between two rivals in the DTM should be. The duel with Ralf (Schumacher) was fair too. It was a good start that we can be happy with.”

Oliver Jarvis (Audi Sport performance cars A4 DTM #5), 9th place
“This wasn’t the start I’d been hoping for. We wanted to score points and fight for a podium position but we finished in ninth place. It was an improvement over our qualifying performance. But now we’ve got to work hard and make fewer mistakes in the next race. Hankook have done a good job, but I’ve got to gain a better understanding of the tires. I’m hoping that we can be stronger at Zandvoort.”

Mike Rockenfeller (E-POSTBRIEF Audi A4 DTM #9), 11th place
“The weekend had started out well. Practice was okay. Position five in qualifying wasn’t perfect but it was a good starting base. Unfortunately, that doesn’t do you any good if you go home empty-handed. That’s why my race was disappointing from start to finish. Nothing seemed to really fit. The main problem: I was much too slow, which bothers me the most. At the first pit stop something went wrong. The car wasn’t lowered properly. I also hit the safety car period at an unfortunate point in time. I had to stop at the red light. A weekend to forget.”

Edoardo Mortara (Playboy Audi A4 DTM #19), 14th place
“My first race in the DTM was marked by many difficulties. But I’m glad to have finished it. We had communications problems and I wasn’t able to listen to the team radio. The safety car was on the track when I had to pit, that was a bit unfortunate. We’ve got to be satisfied. The race was okay. We know that kinds of problems we had. Without these difficulties we can drive a better race.”

Rahel Frey (Glamour Audi A4 DTM #15), 15th place
“My assessment after the first race is very positive. The teamwork is fantastic, the guys support me. The race had ups and downs but basically I pulled through and achieved my goal. I’m happy.”

Miguel Molina (Red Bull Audi A4 DTM #22), 16th place
“The race wasn’t so bad. I started from position eight and fought for seventh place. After the re-start following the safety car period I was hit and spun so that my race was over. Now we need to fight for the next race. Fortunately, the next round is coming up in just two weeks from now.”

Filipe Albuquerque (TV Movie Audi A4 DTM #18), 17th place
“I had a very good start and was able to make up some positions. But then I lost some places in the commotion. It was very tight, door to door, someone brushed me. After the safety car period Vietoris touched me, which cost me a lot of time. At least I did finish the race. It was a very tough race. We collected kilometers. That was a positive thing here. But we need a lot more speed.”

Hans-Jürgen Abt (Team Director Audi Sport Team Abt Sportsline): “This wasn’t bad for a season opener. It was a tough race. We tried to get everything right. The pit crew did a superb job. The strategy was perfect too. But Mercedes didn’t make a single mistake either. Congratulations to Bruno Spengler, he drove a great race. We’re pleased to see that we’re racing at the same pace and are in contention for victory. That was not quite the case last year. Therefore, we’re in for an exciting season.”

Ernst Moser (Team Director Audi Sport Team Phoenix): “An optimal start into the season. Martin (Tomczyk) was one of the protagonists of this race. He had some first-class duels. His car was running well. All of our pit stops were very good. At Martin’s second stop we were even a bit too fast and didn’t get the fuel can off the car in time. That’s why Martin went out with the fuel can and dropped from fourth to fifth place. A big ‘well done’ to Martin and the team. I’m also pleased with Rahel’s (Frey) performance at her first DTM race. She finished in 15th place and made no mistakes. Naturally, she still needs to become a bit faster. We’re working on that.”

Arno Zensen (Team Director Audi Sport Team Rosberg): “I was quite happy that we started among the top ten with one car. Edoardo Mortara’s start was pretty decent. He came out of the first lap on position nine and did a pretty good job of defending his place. He was fighting a fair duel with Gary Paffett for a long time. I was pretty pleased. But then we encountered a communications problem. We didn’t know at which point in time the radio was still working. When we were trying to call Edoardo in during the safety car period he couldn’t hear us. He kept on driving, that meant his race was over. Filipe Albuquerque didn’t have a bad start either but was forced into the grass. When his tires were dirty he was overtaken and running in the penultimate position. Then he ran a red light after a pit stop. Although that’s unfortunate and shouldn’t happen it has happened to others before. Now we’ve got to close the book on it and continue the performance we showed during the tests.”