Quotes after the race at Dijon 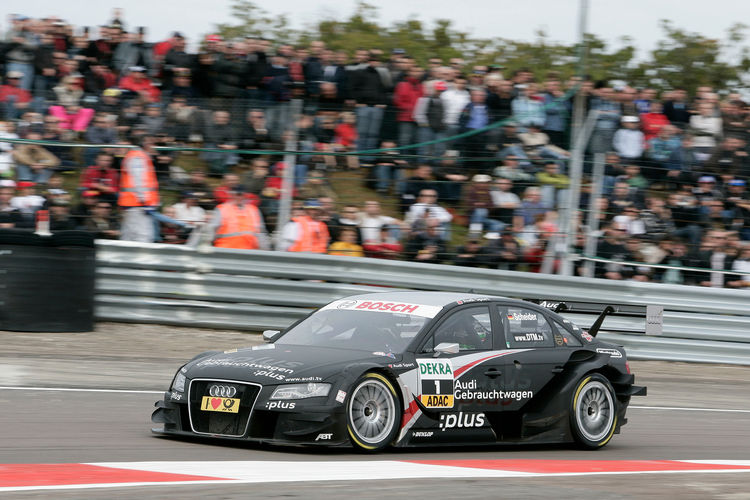 From grid position 16 to sixth place – despite a tire puncture. But Timo Scheider was not the only one to have a lot to talk about after the turbulent DTM race at Dijon-Prenois (France). Quotes from the Audi camp.

Dr. Wolfgang Ullrich (Head of Audi Motorsport)
“That’s a disappointing result for us. Particularly because you could see the good performance our cars had today. I don’t think anyone expected Timo (Scheider), of all contenders, to be the best Audi to finish after starting from position 16. The punctures hit four of our fastest cars. Now we urgently have to investigate the causes. Congratulations to Mercedes on their victory at Dijon. We look forward to an open finale at Hockenheim where we opened the season with an Audi one-two-three-four win.”

Timo Scheider (GW:plus/Top Service Audi A4 DTM 2009 #1), 6th place
“After starting from my poor grid position, sixth place is almost like a small victory. I hardly dared to dream of this before the race. I had a few nice duels on my way forward and of course was a little fortunate as well in that the puncture struck me so close to the pit lane entrance, which meant that I didn’t lose too much time. A seven-point lead over Gary (Paffett) and ten kilos less in our new cars is a decent starting base for the finale two weeks from now. The fans at Hockenheim can now look forward to a real pinnacle of the season.”

Martin Tomczyk (Red Bull Cola Audi A4 DTM 2009 #6), 7th place
“At the start there was a bit of commotion but, still, things went pretty well. Before the first pit stop I had a slow puncture. That’s why I had to slowly drive to the pits and lost a lot of time. After that, things were going very well thanks to good lap times. The final phase of the race was a little curious. It was all about playing it safe and finishing. There was a risk that the drivers behind you might perform some rash maneuvers.”

Mattias Ekström (Red Bull Audi A4 DTM 2009 #5), 9th place
“I had a perfect car and loads of confidence. After my first pit stop I was leading the race. After 20 laps the team informed me that I should choose a safe driving style. That’s what I did up to the end of the race. But it wasn’t enough to save the tires all the way. Unfortunately, the tire blew and I didn’t score a single point. It’s the second time this year that this has happened. I had the same misfortune at Hockenheim at the season opener.”

Markus Winkelhock (Playboy Audi A4 DTM 2008 #12), 10th place
“My start was average. Timo (Scheider) passed me. I overtook Susie Stoddart. I was caught behind Mathias Lauda and ‘Rocky’ for some time. But overtaking was very difficult. I was hoping for the pit stop but wasn’t able to pass anyone at that time either. When everything went topsy-turvy at the end I advanced a little. Tenth place is quite alright considering I started from position 14.”

Alexandre Prémat (Audi Bank A4 DTM 2008 #14), 11th place
“In the race I developed a very good rhythm. I was able to drive at the same pace as the 2009-spec cars and showed how fast I am in a 2008-spec car. After the commotion at the end the result of course was not what it should have been.”

Mike Rockenfeller (S line Audi A4 DTM 2008 #11), 13th place
“After a very good start I had to struggle quite a bit with my car that was heavily understeering in fast corners. On the second set of tires things went well. I was running in front of Mathias Lauda when we made an early second stop. After his second stop I was running alongside him on the outside of turn one. I wanted to get in front of him at all cost but tried a little too hard. I left the track in the process and Markus (Winkelhock) passed me. Toward the end, I didn’t take any more risks.”

Oliver Jarvis (Audi Cup A4 DTM 2008 #15), 15th place
“The start was brilliant. I overtook three or four cars in the first turn. Then (Gary) Paffett touched the right rear of my car, pushed me out a bit and I lost several places. The first stint was pretty decent. Timo (Scheider) and Martin (Tomczyk) overtook me. After that I was not able to keep the pace of my teammate Alex (Prémat). To top it off, I had a puncture toward the end. That was very disappointing, even though the race was basically fun. I’m already looking forward to racing with a lighter car at Hockenheim.”

Katherine Legge (Audi Collection A4 DTM 2008 # 21), 16th place
“There was a collision at the start, apparently with Susie (Stoddart) and Christian (Bakkerud). My car was damaged in the incident and I dropped behind Bakkerud. It took ten laps before I was able to drive again without having someone directly in front of me. I still don’t understand why we had such a difficult time today. It looks as though there was a technical problem. I don’t know whether this was due to the body contact in the race or a late consequence of my accident during the warm-up.”

Tom Kristensen (100 Jahre Audi – A4 DTM 2009 #2), 18th place
“It was a perfect weekend for a long time. It started with posting the fastest time in free practice. In qualifying we fought for the top four grid positions in the rain. In the warm-up I was the quickest. When, on top of that, I was running in second place on the first few race laps, everything was really looking good. The pace was there. Had I been called to the pits very early I might have even been first. Instead, a nice battle with Bruno Spengler ensued. Unfortunately, there were problems with the rear tires shortly before race end. Five or six laps before the end I had a tire puncture. I wanted to take the car into the pits in a way that wouldn’t damage it or that would jeopardize other drivers. That’s why I took a shortcut after turn three. I got the black flag for that – but my race was over anyway.”

Hans-Jürgen Abt (Team Director Audi Sport Team Abt Sportsline)
“That was a race with all the ups and downs. Most important for us, though, is the fact that we had Timo (Scheider) finish the race and in the points at that. Due to the tire problems it was a race dominated by tactics. Nevertheless, I believe that our starting base for Hockenheim is optimal. We’ve got a seven-point lead. We’re happy with that. Still, the DTM remains thrilling – and that’s something all the fans can be happy about.”

Ernst Moser (Team Director Audi Sport Team Phoenix)
“Oliver (Jarvis) had a super start and was already running in front of Gary Paffett, who then, unfortunately, bumped him in his rear corner in the turn. That caused Oliver to hit the dirt and lose the place again. Afterwards, he was lacking speed throughout the race. He wasn’t able to drive Alex’s (Prémat) times. Alex on the other hand was able to keep the pace of the new cars all the time. He did a tremendous job of pushing forward and overtook Oliver and Maro Engel on the circuit. At the pit stops we left Martin Tomczyk behind us. Then we reduced the pace to save the tires. There was a traffic jam in front and faster cars were coming up from behind. Things became a little turbulent. Unfortunately, we lost eighth place in the process and finished eleventh. But Alex’s pace today was a dream.”

Arno Zensen (Team Director Audi Sport Team Rosberg)
“It was a turbulent race and that was probably interesting for the spectators. Particularly the last laps were tricky. In the end, with Markus (Winkelhock) finishing tenth, we had the best used car in the Audi camp, albeit with a little luck. I’m happy that our cars will now be ten kilograms lighter again so that we can really strike once more at Hockenheim.”