Quotes after the race at Barcelona

{{ activeItem() }}
Twitter
09/20/20
The @FCBayern is driving change. A full fleet of Audi e-trons makes them the first football club in the world to em… https://t.co/3Otc0JtYD9
09/19/20
Innovator tested, visionary approved. The Audi Q4 Sportback e-tron concept. #Audi #AudiQ4 #etron #Sportback… https://t.co/fI3WfYN2PA
09/18/20
“It is our task to leverage our technical and engineering competence to provide answers which are enabling society… https://t.co/usLMaXlxa7
09/18/20
Watch the latest episode of #WhatsUpAudi to find out more about the new Q2 #generation and its striking #design &gt;&gt;… https://t.co/DUKsAYe75t
Audi on Twitter
YouTube
09/18/20 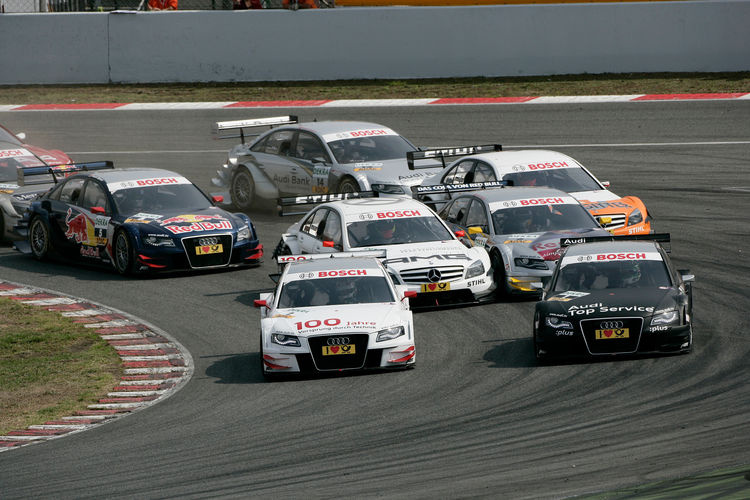 By clinching a one-two-three win at Barcelona Audi has taken another step toward a successful title defense in the DTM. Quotes after the race at Circuit de Catalunya.

Dr. Wolfgang Ullrich (Head of Audi Motorsport)
“I’m happy in every respect. It was a nearly perfect weekend. In qualifying we weren’t quite as pleased with the overall result. That we were able to convert this into such a good race result is due to the fact that everyone did a perfect job. It was a great team performance, the cars were very quick, the drivers made no mistakes and the pit stops were right on the mark – they all were extremely good. When everything fits together so positively, you have the chance to clinch such a result. An important step toward the championship – but that’s still quite a ways away.”

Timo Scheider (GW:plus/Top Service Audi A4 DTM 2009 #1), 1st place
“An incredible weekend – and an incredible start. Of course after starting from fifth on the grid my goal was to attack Gary (Paffett) in turn one as best I could. But that I’d manage such a start and take the lead was unusual. After that, my pace and my car were very good. I was able to achieve a lead of four, five seconds and then drive the race in a controlled manner. My engineer said that I didn’t have to attack, so I adjusted my speed accordingly. We had two good pit stops. We clinched a nice victory, which is a very good feeling. And in the championship we’ve now got a lead of twelve points.”

Tom Kristensen (100 Jahre Audi – A4 DTM 2009 #2), 2nd place
“That was a perfect weekend. Track record in qualifying, one-two-three win for Audi from the pole position. Congratulations to Timo (Scheider) on this great result. He was consistently quick and deserves this victory. My start was good. I already saw Paul Di Resta and Martin Tomczyk in my mirror and was quite surprised to suddenly see Timo pass me on the left. I thought he might have jump-started and actually considered my response time at the start to be pretty good for a 42-year-old … But whatever the case may be: It was obvious that Audi builds the fastest DTM car.”

Martin Tomczyk (Red Bull Cola Audi A4 DTM 2009 #6), 3rd place
“In the end things were going exactly the way we’d been hoping they would before the race. Timo (Scheider) won and now has a nice cushion of points in the championship. I’m very happy with third place and made another leap forward in the standings. Things are really going well at the moment. It’s nice to be standing on the podium and being able to reward the hard work of the team by clinching places one, two and three.”

Mattias Ekström (Red Bull Audi A4 DTM 2009 #5), 6th place
“My start was okay, nothing to write home about. I was driving on the inside, hit traffic and had some body contact in the second turn. Timo (Scheider) managed an incredible start on the outside – a nice maneuver on his part and perhaps his masterpiece. Then I drove as best I could. In the end I approached Gary Paffett on better tires. He tried to block me as much as he could. Although we only exchanged a bit of paint I received a warning. That’s why I wasn’t able to attack harder in the end. Now I’ve got a twelve-point gap. That’s a lot but the season isn’t over yet.”

Alexandre Prémat (Audi Bank A4 DTM 2008 #14), 8th place
“Finally: a point! I’m very happy to have finished the race and come eighth. I started from seventh but the rhythm of the new cars was really very, very fast. I had a good fight with Maro Engel and Oliver Jarvis. I’m really pleased with the performance of the team. And I’m happy for Audi and for Timo Scheider.“

Oliver Jarvis (Audi Cup A4 DTM 2008 #15), 9th place
“My start was great but in the first turn it would have been better for me to have driven on the inside. This way, I lost two places. The first pit stop was good but then I had to drive behind a Kolles car. We decided to make an early second pit stop. The car was feeling fantastic. But Alex (Prémat) went out on the track right in front of me. So I had to follow him in the final phase of the race because, unfortunately, I wasn’t able to pass him.”

Mike Rockenfeller (S line Audi A4 DTM 2008 #11), 12th place
“I’m not happy. The whole weekend didn’t go well. My start to the race was okay. Unfortunately, (Mathias) Lauda managed to get past me. That turned into a problem because in the end I was stuck behind him. Points, unfortunately, were not possible for me today.”

Katherine Legge (Audi Collection A4 DTM 2008 # 21), retirement (result of accident)
“Unfortunately, my race was over after the first pit stop. The only thing the unnecessary action by Susie (Stoddart) accomplished was that she, herself, appeared in a bad light. I’m very disappointed and am thinking positively about the next race. I’m happy for Timo (Scheider), Tom (Kristensen) and Martin (Tomczyk). They drove a great race on their way to the one-two-three victory.”

Markus Winkelhock (Playboy Audi A4 DTM 2008 #12), retirement (result of accident)
“I had a poor start and immediately lost two positions to ‘Rocky’ and Jamie Green. I really had problems with handling. The car was oversteering heavily. It was difficult to drive – unlike in the warm-up when the car was still okay. Later, I had a battle with Jamie Green. He drove into my side. Apparently, the suspension was bent in the process because the car felt really strange. Then I decided to park the car for safety reasons.”

Hans-Jürgen Abt (Team Director Audi Sport Team Abt Sportsline)
“One, two three – that’s a dream result on the way to the championship. Things could hardly go better than this. I want to sincerely thank everyone again who had a part in this. I think pressure also leads to good results. Today, we did everything right. Congratulations to Audi and the entire squad. Today’s been an Abt day: My son Daniel clinched the title in the Formula ADAC Masters and my brother Christian continues leading the ADAC GT Masters with the Audi R8 LMS.”

Ernst Moser (Team Director Audi Sport Team Phoenix)
“As in qualifying, we again had the quickest year-old-cars. We fought with the new Mercedes cars for a certain amount of time but weren’t able to keep them at bay. Other than that, our pace was very good and we achieved a point for Alex (Prémat). We’re all very happy about that. Olli (Jarvis) was a little faster at the end but wasn’t able to pass him anymore. Much more than that wasn’t possible today. We’re pleased and happy about Audi’s one-two-three win and our two exploits with the R8 LMS in the ADAC GT Masters at the Sachsenring. That was a good weekend for Audi and Phoenix Racing.”

Arno Zensen (Team Director Audi Sport Team Rosberg)
“We made a mistake and had ‘Rocky’ drive through the pit lane twice before the grid formation. That was not allowed and resulted in a penalty. That was our mistake – sorry abou that. But the race didn’t go well for us either. We might have finished in front of (Mathias) Lauda but that’s all. Markus (Winkelhock) was hit by (Jamie) Green, after that his race was over. His car was damaged so he retired for safety reasons. Congratulations to Audi on this sensational one-two-three win and to Timo (Scheider), who managed a solid extension of his lead.”