Quotes after the race at Adria 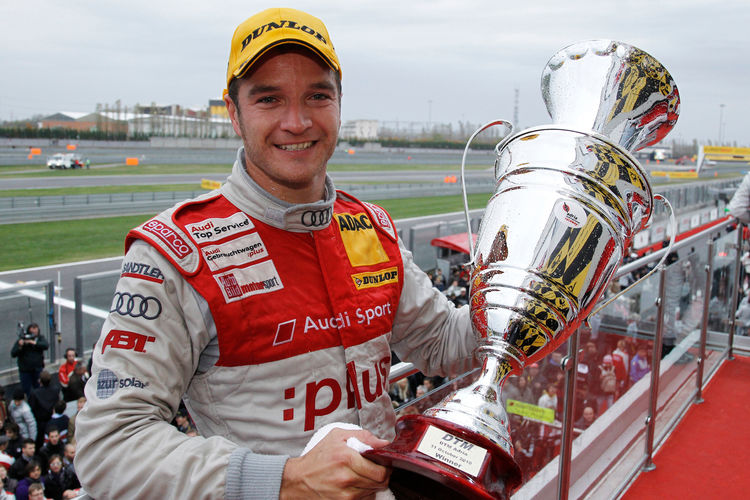 Timo Scheider’s victory from grid position 15 and Alexandre Prémat’s accident were the topics that dominated the entire European finale of the DTM at Adria which Audi was able to determine in its favor. Quotes from the Audi camp after the most thrilling and turbulent DTM race of the year.

Dr. Wolfgang Ullrich (Head of Audi Motorsport)
“Alexandre’s (Prémat) accident was a huge shock for all of us. It looks like he came out of it okay. If he’s doing as well tomorrow as he was ten minutes after the race when I talked to him, then I’ll be very happy and optimistic that he’ll be in the cockpit again at Shanghai. Besides this horrible accident which had no serious consequences thanks to the high safety standards of our cars we showed a really tremendous performance today. On the whole, our cars were quicker than those of our rivals. Timo (Scheider) pushed forward to the front from grid position 15, with which he was very disappointed yesterday, with the entire squad determined and working together to achieve this. This is a very special result! In terms of speed and strategy Mattias Ekström could have won this race as well. Unfortunately, he lost time in the pits due to a minor defect. I’m also very happy that Markus Winkelhock managed to finish fourth today by showing a great race after this very difficult season. All in all, it’s been a very positive weekend and good motivation for us to continue this way because there’s still one more race at Shanghai.”

Timo Scheider (GW:plus/Top Service Audi A4 DTM #1), 1st place
“An incredible race! Of course I’d been aiming to score points. At the start I’d worked out a strategy for the first two corners. Although it didn’t work out exactly as I’d planned I did manage to go into the race in fifteenth place and was seventh after the first lap. Alexandre’s (Prémat) accident was a shock. We’ve got to be thankful for the fact that it ended the way it did. That’s a good sign which shows how safe the DTM cars really are. After the re-start we showed an extremely good performance and were able to drive an incredibly long first stint. When 17 or 18 laps before the end I saw the laps being counted backwards on the pit board I was wondering if they’d forgotten my pit stops! Then, finally, the call came. With a perfect strategy we had two stops in a row with just a short time in between. It’s an incredible feeling to win with a nine-second lead after having started from position 15. I want to thank the crew and the strategists. They gave me the car that enabled me to be so quick.”

Markus Winkelhock (Playboy/GW:plus Audi A4 DTM #14), 4th place
“My race was huge fun. I’m very happy that apparently nothing happened to Alex (Prémat). Obviously I’m very happy about my result too. The car was fantastic, the conditions weren’t easy. But I particularly like such conditions, as I proved before in Formula 1. I’m overjoyed. My season had really been frustrating up to now. This is a highlight for the team and me. Finally, I’m going home happy and am already looking forward to Shanghai.”

Oliver Jarvis (Tabac Original Audi A4 DTM #2), 5th place
“A very thrilling race! I had a fantastic start and a good first lap. The pace was good in the beginning but then the tires started degrading a little. I managed to overtake Green but made a mistake and lost a place to Winkelhock. After that I gave everything. But Markus was driving fantastically and made no mistakes. But fifth place is still a good result.”

Martin Tomczyk (Red Bull Cola Audi A4 DTM #6), 6th place
“The beginning was turbulent. My start was good but then one thing happened right after the other. In turn three I was pushed forward in a straight line – by Markus Winkelhock, who had been pushed by David Coulthard. That was a racing accident and I was in the wrong place when it happened. That was a shame! After the second start I was really doing well. I managed to make up a lot of places and catch up with the cars in front of me. Then David Coulthard came again. I was running alongside him but he didn’t leave me enough room. I drove through the grass with my left wheels and again slipped in a straight line. This cost me many places. But our pace was good. I was able to show that I was one of the quickest in the field. But that doesn’t do you any good if you’ve got to make up ground again twice from the very rear.”

Mattias Ekström (Red Bull Audi A4 DTM #5), 8th place
“Obviously, this was not a good result. Unfortunately, my gearshift wasn’t working any more. Of course that’s very disappointing, particularly when you’re in contention for victory. Having 15th place shown to me on the pit board was very frustrating.”

Mike Rockenfeller (S line Audi A4 DTM #10), 11th place
“I had a very good start but then the race became turbulent and I lost some positions. Paul (Di Resta) pushed past me and was in front – no doubt about it. Then we came into the final turn of the first lap and I was under a lot of pressure from the rear. I wanted to defend my line on the inside. I’ve got to look at the footage first. I think my car was slightly hit. I was driving along the inside of the kerbs. Paul came from the far outside. He was driving his racing line but the problem was that that’s exactly where I was. If he had chosen another line everything would have been okay. He wasn’t expecting this either. There was no intent on my part. I didn’t want to attack him but just defend myself against the rear. Of course I’m very sorry about this for him. But my race was ruined as well. My car was heavily damaged. We still repaired quite a few things but I was at the very rear of the field and the situation was very difficult. But the most important thing today is that Alex (Prémat) is apparently doing well.”

Katherine Legge (Glamour Audi A4 DTM #15), 16th place
“The beginning of the race was dramatic. I tried to stay clear of all trouble. My car felt really good in the beginning. But then fourth gear was stuck for a whole lap. I dropped behind. I pulled the gearshift lever and when I rumbled over a kerb I was able to shift again. The pace was good but we can’t deliver a decent race throughout. Otherwise we might have even been able to finish among the top five today.”

Miguel Molina (Audi Bank A4 DTM #18), retirement (accident)
“This was a very complicated race. The pace was fantastic and I made up some places. But toward the end (Paul) Di Resta hit me and destroyed my suspension. That was it. Now we’ve got to try and focus on the positive aspects of the race and finish the next one.”

Alexandre Prémat (TV Movie Audi A4 DTM #9), retirement (accident)
“That was a pretty heavy accident. I’m happy that Audi has invested so much in the safety of the DTM cars over the years. I can’t say anything yet about the accident with Maro Engel. I’d like to look at the TV footage first.”

Hans-Jürgen Abt (Team Director Audi Sport Team Abt Sportsline)
“This was the fruit of hard labor! Timo (Scheider) showed the car’s full potential. He was driving superb lap times. The team had a great strategy. It always waited until the track conditions were perfect. That’s the reason for the late pit stops. If you start from position 15 and win the race you can be proud of the whole squad. The incident involving Mattias Ekström was a real shame. Otherwise we might have scored a one-two result today. But it wasn’t meant to be. But Timo’s victory broke our duck. That’s a huge motivation for the whole team. I’d like to thank everyone – including those who kept their faith in our ability to win.”

Ernst Moser (Team Director Audi Sport Team Phoenix)
“I was greatly relieved to see Alex (Prémat) climb out of the car on his own after his accident. We’ve also been informed that he’s doing well under the circumstances and was taken to a hospital for a general medical check. The first lap was really something: one of our cars suffering total damage, the other one losing a lot of places after having started from fifth. Of course that’s frustrating and we’ve got to get over this first. We were hit pretty hard again today. We need to deal with this now. And then we’re going to attack again.”

Arno Zensen (Team Director Audi Sport Team Rosberg)
“Several huge loads were taken off my chest today. ‘Well done’ to the whole squad. The first load that was taken off was when I saw that Alexandre Prémat was apparently okay. The second event: Timo (Scheider) won the race for Audi. And that we finished fourth as the best team of a year-old car with Markus was the next load taken off me. Finally! Congratulations to him – a great race. Katherine (Legge) drove a good race too and was keeping up with the laps of the front runners toward the end when she had just been on the verge of giving up due to a transmission problem. Today was finally a day for Team Rosberg. My thanks go to the whole squad.”