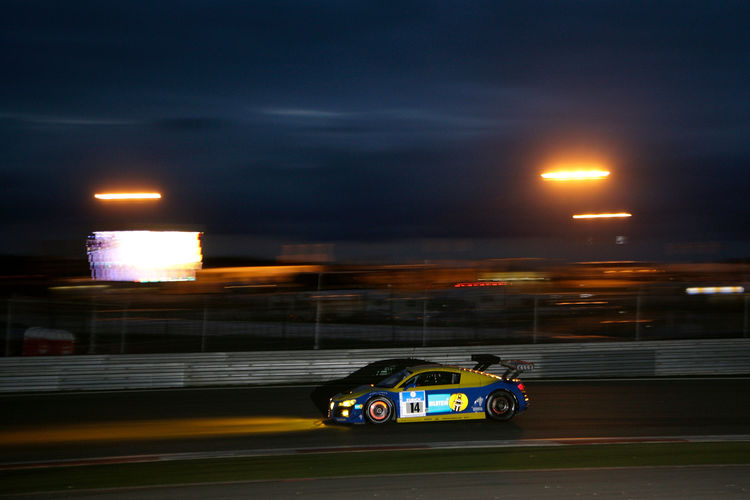 The four Audi R8 LMS sportscars tackle the 24-hour race at the Nürburgring from grid positions seven, nine, twelfth and 18. The comments from the Audi camp after six hours of qualifying.

Dr. Wolfgang Ullrich (Head of Audi Motorsport): “The grid positions are obviously not quite what we had expected. We simply couldn’t manage any clear, tidy laps at the beginning of both qualifying sessions when the fastest lap times were set. Afterwards it wasn’t possible to make any worthwhile improvement due to traffic, accidents or rain. We’ll now concentrate on completing the race without risks. After all 24 hours are long.”

Marc Basseng (Bilstein Audi R8 LMS #14)
“I’m delighted as seventh place in this qualifying is really okay. On Thursday we were even further behind. We then worked constructively on the car and could improve again. The forth row is really okay for a 24-hour race. The basic set-up of the Audi R8 LMS was derived in the VLN races and during the endurance tests. There were nevertheless a few changes because of the weather and track conditions. We had to adapt our car and work a little more, but we were converted it well.”

Marcel Fässler (Bilstein Audi R8 LMS #14)
“Marc Basseng’s time – a lap of 8m 28.5s – is really very good. He didn’t set it on the first lap but in traffic. So, a really fantastic result from him. We are very satisfied with the set-up and confident for the race. I think we have a very consistent and good car for the distance. We have to exploit this in the race. This race is long and extremely hard.”

Frank Stippler (Bilstein Audi R8 LMS #14/Audi Sport performance cars R8 LMS #15)
“A position in the top ten is good. We didn’t really make the best of our first lap on Friday. Despite this we were able to improve again in traffic. This was considerably better than 18th position which we held at the start of qualifying. Against all expectations we could still improve. We are well sorted for the race. After a damp start to the race it should remain more or less dry. We’ve found a mechanical and aerodynamic set-up that should help us in the race.”

Christian Abt (E-POSTBRIEF Audi R8 LMS #16/PlayStation Audi R8 LMS #17)
“We found a good race set-up during the practice session and also tried a quite a few things again today. We ran different set-ups on both of our cars, which we’ll now merge to a ‘best of’ combination. We are in a good position for the race and will try to run at the best possible speed for 24 hours.”

Christer Jöns (PlayStation Audi R8 LMS #17)
“I didn’t drive anymore during Friday’s qualifying. However, we already had a good set-up on Thursday, which my team mates confirmed again on Friday. We also tested which tire compound suited us the best, which proved to be a step forward. All the drivers are pleased with the car. It could have been a few places further up the grid, but it was just a question of details on the crucial laps.”

Luca Ludwig (PlayStation Audi R8 LMS #17)
“With our position in the top ten we are second best Audi and therefore still in the game when the race starts on Saturday afternoon. What is much more important is that together with Christian (Abt), Christer (Jöns) and Christopher (Mies) we found a good set-up for our R8 LMS which everybody is satisfied and equally as quick. This is the best possible base which you can have on the evening before the race.”

Christopher Mies (PlayStation Audi R8 LMS #17)
“It goes without saying that we’d hoped for more in qualifying. This is obvious when you started from the front row the year before. However, we didn’t want to take any unnecessary risk in the changeable track conditions. I was going well on my fast lap and could have made up some places but then it started to rain. Ifs and buts don’t count – we are ninth on the grid and will make the best of it in the race.”

Mattias Ekström (E-POSTBRIEF Audi R8 LMS #16)
“The weekend has run exactly as it should up to now: our car is running perfectly and has no scratch, every driver is happy with the set-up, the team has adapted to the unique circumstances in the overcrowded pt lane and keep calm in all the confusion. We’ll now throw all the knowledge gained from the practice session and work out a strategy for the race. I suggest that all the fans use Friday night to get a few hours sleep as they’ll see a battle royal from Saturday afternoon.”

Timo Scheider (E-POSTBRIEF Audi R8 LMS #16)
“I take a positive feeling from all the practice session into the race weekend. We were a little unlucky in second qualifying on Friday because we joined the queue early and waited quite a long time, so the tires lost temperature as a result. This is why it was very difficult for Marco (Werner) during his run. However, at the end of the day I believe in the performance of our R8 LMS. We are definitely not out of the equation in twelfth place.”

Marco Werner (E-POSTBRIEF Audi R8 LMS #16)
“My fast lap on Friday evening was not really very good. The tires didn’t like having to wait so long in the pit lane. Therefore, even without heavy traffic I was three seconds slower than on Thursday when I had to overtake a lot. It’s obviously a shame and a little disappointing after the fantastic result last year. However, this only lasts till Saturday morning because then it’s only the 24 hours in the race that count.”

Christopher Haase (Audi Sport performance cars R8 LMS #15)
“On Thursday we put everything into solid preparation so that our car functioned well, that we have a suitable set-up and we all feel comfortable in the car. We managed this exceptionally well. Audi Sport Team Phoenix does a top job and it is also a lot of fun to work with the team and with Audi Sport. Eighteenth on the grid isn’t so important since the race last 24 hours. You first have to get through the night in good shape. Only then do you actually see where you stand and what’s still possible. I’m really looking forward to this race.”

Marc Hennerici (Audi Sport performance cars R8 LMS #15)
“We did our homework very well. In this respect we are well equipped for the race. Unfortunately we had a small off in second qualifying. Such things can happen. The result is grid position 18. This isn’t ideal but us drivers can approach the task in hand calmly with the support of Phoenix and Audi. We move up through the field.”

Markus Winkelhock (Audi Sport performance cars R8 LMS #15)
“Eighteenth is of course not perfect. At the start of the race we’ll quite probably lose two minutes to the leaders before we’ve got the traffic behind us. Nonetheless we are certainly well motivated. A year ago we saw that really anything can happen. After the start we were even further back and still finished on the podium. We have to run good, clean laps and then we’ll move forward.”

Hans-Jürgen Abt (Team Boss Audi Sport Team Abt Sportsline): “We maybe hoped for a little more. However, when all is said and done we are well satisfied with the result. We concentrated solely on the race on Friday and made a final check to see if everything works. We’d hoped that the time for yesterday would be enough. This wasn’t the case. The adverse weather conditions also didn’t play into our hands. We wanted to wait to the end and then go out with very soft tires. This didn’t work because the circuit was too wet. However, during a 24-hour race you have to be patient, drive through without accidents and lose as little time working in the pits as possible – then you’re well on the way.”

Ernst Moser (Team Boss Audi Sport Team Phoenix): “As usual the conditions in the Eifel were difficult – sometimes wet, sometimes dry. You had to do it on the first lap yesterday and today. This wasn’t the case for us. Marc (Basseng) moved up to seventh later in traffic – this was very good. Unfortunately we were unable to set a time with the other car today. We had a brake problem which we fortunate to find. Now we are sorted. Eighteenth on the grid isn’t perfect, but 24 hours are long.”