Quotes after qualifying at the EuroSpeedway 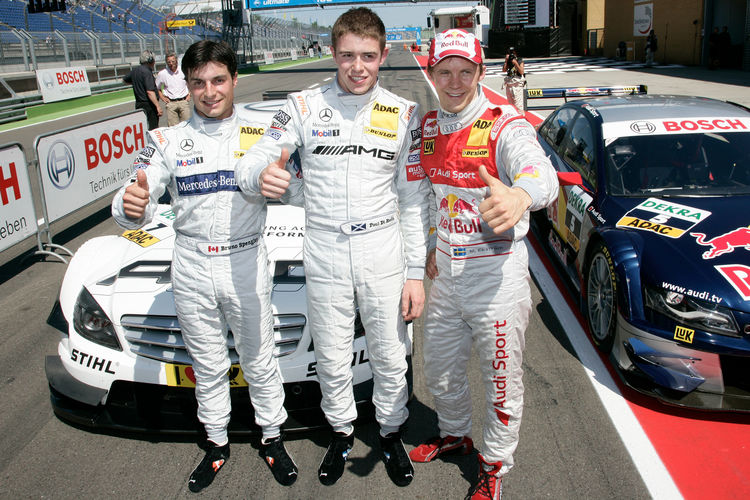 Mattias Ekström will start into the third 2010 DTM round at the EuroSpeedway from position three. Quotes after qualifying from the Audi camp.

Dr. Wolfgang Ullrich (Head of Audi Motorsport)
“That was a very close qualifying. We always have a bit of a difficult time here at the EuroSpeedway. Nevertheless, one has to look at the fact that there are four Audi cars among the top seven and Mattias (Ekström) on the second row on position three. We’re concentrating on converting this into good results in the race. I’m looking forward to Sunday with optimism.”

Mattias Ekström (Red Bull Audi A4 DTM #5), grid position 3
“It’s always nice to start a race from one of the front positions. Obviously, it’s best to start from position one on the grid. Today we were only good enough for third place. I’ve got to be satisfied with that. In the past we always had a hard time here in dry weather. We’ve still got a long way to go before scoring a good race result on Sunday.”

Mike Rockenfeller (S line Audi A4 DTM), grid position 5
“My thanks go to Team Phoenix. They again gave me a good Audi, as at the two previous events. Q4 would have been possible today too. But that goes for many of the other drivers as well. I was short of barely seven hundredths. Still, I’m super pleased with fifth place and optimistic for the race.”

Timo Scheider (GW:plus/Top Service Audi A4 DTM), grid position 6
“The positive thing is that we can see progress across the three race weekends. Needless to say, sixth place isn’t a dream result, but it’s the third row on the grid. That means that, strategically, we can achieve something. I’m relieved to see that we’ve managed to improve our performance throughout this weekend. From position six, maybe even a podium will be possible.”

Alexandre Prémat (TV Movie Audi A4 DTM), grid position 7
“It was a good qualifying in which both cars of the Phoenix team again made it into the third segment – that was anything but easy with the gaps being so close. I’ve got a good base for tomorrow. With a perfect start a lot of points are possible, maybe even a podium. On Friday we were very strong across a racing distance.”

Martin Tomczyk (Red Bull Cola Audi A4 DTM #6), grid position 10
“That was a modest result. I simply wasn’t able to drive any faster times. We need to and will analyze why that was the case. I realized pretty quickly that we weren’t able to post the times of the other drivers. I was lacking half a second.”

Miguel Molina (Audi Bank A4 DTM), grid position 11
“The qualifying session wasn’t fantastic. It was really tight here. Mercedes was a little faster today than we were. But with respect to the race I’m pretty optimistic.”

Oliver Jarvis (Tabac Original Audi A4 DTM #2), grid position 13
“That was very disappointing. The second free practice wasn’t very easy either. And in qualifying we weren’t quick enough. We’re in for a long night with a lot of work. The strange thing is that I’m pretty happy with our basic balance. But grip simply isn’t good enough everywhere. That’s why we’re so slow.”

Markus Winkelhock (Playboy/GW:plus Audi A4 DTM), grid position 15
“Honestly, after the free practice sessions I wasn’t expecting any great results. Even then we were much too slow. I was having difficulties with the car the whole time. We just couldn’t get the tires to work. Obviously, I’m not satisfied with 15th place.”

Katherine Legge (Glamour Audi A4 DTM), grid position 18
“We made some progress since the free practice sessions but I made a mistake that cost us some time. But ‘Winki’ and I are at the bottom part of the time sheets. That means we’ve got a problem that we need to solve. It’s difficult to recognize the phenomenon, though. If we could only see a clear direction – because the team is methodically, logically and systematically working on all the items.”

Hans-Jürgen Abt (Team Director Audi Sport Team Abt Sportsline)
“I think it was obvious that the situation was incredibly close. We tried everything to squeeze out whatever was possible. We didn’t quite manage to do that. Third place puts within a striking distance. We’ve got to find a good set-up for the race in order to be able to attack full-force.”

Ernst Moser (Team Director Audi Sport Team Phoenix)
“It’s nice to see that the older cars are competitive this year. We’ve been among the front runners in each qualifying. Today’s qualifying was a bit unfortunate: with both cars we almost made it into the top four. But I’m totally pleased with the team’s performance. With grid positions five and seven we can really pin high expectations on the race.”

Arno Zensen (Team Director Audi Sport Team Rosberg)
“The whole team is pretty much at a loss about what the problem is. We’re lacking over a second – not just today, but on the whole weekend. We don’t know why. The picture is similar with the new cars: some are having no problems with the tires, others do. That’s all we know at the moment.”