Quotes after qualifying at Spa 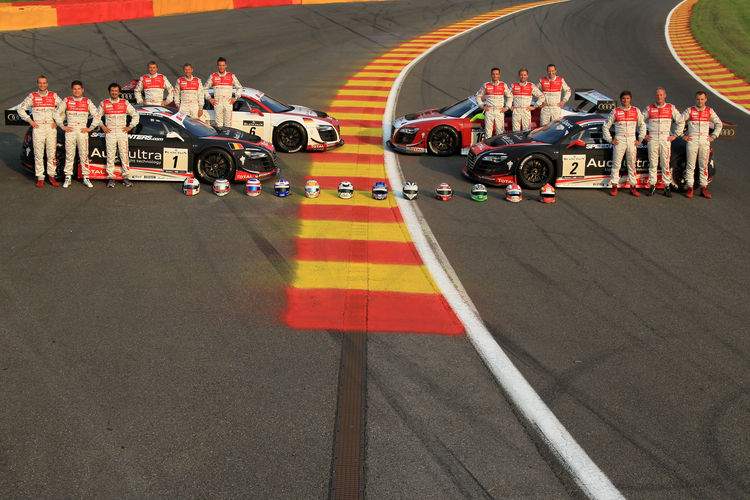 Audi will go into the 24-hour race at Spa (start on Saturday at 1600 hrs) from the second row of the grid. Quotes after qualifying.

Dr. Wolfgang Ullrich (Head of Audi Motorsport): “We’d been expecting a large number of cars to be driving at a very similar and very high level here. That was confirmed in qualifying yesterday. In our case, not everything went according to plan, as we’d been hoping to put all four cars into the top 20 – even though, as always, we mainly concentrated on having good cars for the race. That’ll also be the most important thing at this 24-hour race. I’m sure that the field, especially in the beginning, will be thoroughly whirled around again. One of the most difficult and major challenges will be to stay out of any trouble.”

Ernst Moser (Team Director Audi Sport Team Phoenix): “We wanted to improve in the super pole from position 13 and that would probably have been possible. We were deprived of this chance when the super pole was cancelled due to rain. But I don’t want to complain; we’ve got two good cars and two good driver trios. Now we want to cleverly go into the race and move forward as quickly as possible with a good and prudent strategy plus quick pit stops.”

Vincent Vosse (Team Director Audi Sport Team WRT): “Qualifying wasn’t so bad. Unfortunately, the planned super pole was cancelled due to heavy rain. The number ‘1’ R8 LMS ultra is on position four. Our car number ‘2’ is on position 21. That’s not ideal but for a 24-hour race not really that important. We saw that last year. We’re well prepared. Now we need a strong race and have to avoid mistakes because you immediately pay for mistakes in an endurance race.”

Christopher Haase, Audi R8 LMS ultra #1 (Audi Sport Team WRT), grid position 4:
“The position on the second row is a good result – Stéphane (Ortelli) did a very good job of achieving this. We worked together very well in the team, which was probably one of the keys to this result. Fourth place gives us a little room after the start and perhaps even the chance to pull ahead a bit. But we all know: the grid position does not decide a 24-hour race.”

Christopher Mies, Audi R8 LMS ultra #1 (Audi Sport Team WRT), grid position 4:
“Obviously, we’d have liked battling for pole and being on grid position one in the race. That would have been a thriller particularly in the race. But we can be pleased with position four as well – ‘thank you’ to Stéphane (Ortelli) who set our fastest time yesterday.”

Stéphane Ortelli, Audi R8 LMS ultra #1 (Audi Sport Team WRT), grid position 4:
“Grid position four means nothing in a 24-hour race. For me, it’s a lot more important that all of us are feeling very comfortable in the car. We were able to drive consistently good times in practice even on used tires, have found a good balance and have a lot of confidence in our R8 LMS ultra. We know how strong the competition is, but we also know how strong we are: four cars, two teams that stick together and the great support from Audi are really a big help.”

Marcel Fässler, Audi R8 LMS ultra #6 (Audi Sport Team Phoenix), grid position 13:
“Due to cancellation of the super pole we’re starting into the race on Saturday from position 13. That’s not the position I like to be on. Since I can handle a wet track pretty well and the Audi R8 LMS ultra is good in rain I think it’s a bit unfortunate that we weren’t allowed to drive. We could have probably made up a few places. Our start driver is now in the middle of the field and has to watch out a bit more in the early phase.”

Tom Kristensen, Audi R8 LMS ultra #6 (Audi Sport Team Phoenix), grid position 13:
“It’s nice at my age to be competing as a rookie again at the Spa 24 Hours in the Audi R8 LMS ultra. I’m looking forward to a tough race. 235 drivers and 66 cars are running on this gigantic race track for 24 hours – a fantastic challenge. I hope that we can show that you need an Audi R8 LMS ultra to achieve a good result here and that we’ll be able to move forward with reliability and a consistently good performance.”

André Lotterer, Audi R8 LMS ultra #6 (Audi Sport Team Phoenix), grid position 13:
“We can go into the race with a pretty good feeling because our car has very good balance. We feel comfortable in the cockpit. We can trust the R8 LMS ultra. Our position is perhaps not ideal. It would have been nice if Marcel (Fässler) could have attacked again in the super pole. But the situation is the same for everyone. We’re in contention. The most important thing is to have a good race car.”

Marco Bonanomi, Audi R8 LMS ultra #2 (Audi Sport Team WRT), grid position 21:
“The qualifying result was positive even though we barely missed making it into the top 20. But we’ve found a good set-up for the race. I’ve got a positive feeling. My team-mates and I did a lot of work, our team spirit is good.”

Edward Sandström, Audi R8 LMS ultra #2 (Audi Sport Team WRT), grid position 21:
“It’s an honor for me to drive at Spa. It’s one of the most famous tracks. It’s seven kilometers long and has a good rhythm. My qualifying session was good. Unfortunately, I had traffic in the last chicane on my first lap which cost me half a second. With a free lap I’d have easily made it into the top 20 qualifying. Now I’m going to give my best in the race.”

Laurens Vanthoor, Audi R8 LMS ultra #2 (Audi Sport Team WRT), grid position 21:
“Unfortunately, with position 21 we barely missed making it into the top 20 qualifying. But for a 24-hour race that’s not so important. The work we did was good; we optimally prepared for the race and have got a perfect car. We know what we need to do – we’ve got to stay concentrated and can’t afford to make any mistakes. In that case, a good result is probably possible.”

Andrea Piccini, Audi R8 LMS ultra #16 (Audi Sport Team Phoenix), grid position 29:
“Qualifying unfortunately didn’t go as expected. We weren’t able to make perfect use of the tires. Then there was an electrical problem for the first qualifying session after the stewards had read the data. That’s why we started with a delay and the tires had already lost a bit of pressure. In the next qualifying session Frank (Stippler) wasn’t able to improve any more in heavy traffic. I then climbed into the car as the last driver when it was dark. Unfortunately, I didn’t catch a free lap on either of my two trials. That we’re not among the top 20 is a shame but not dramatic. We’ve got a good car for the race.”

René Rast, Audi R8 LMS ultra #16 (Audi Sport Team Phoenix), grid position 29:
“Andrea (Piccini), Frank (Stippler) and I got used to each other very well in the practice and qualifying sessions and adjusted the R8 LMS ultra to our needs. Even though qualifying didn’t go as well for us for various reasons we’re tackling the race thoroughly prepared. When a race lasts 24 hours the grid position isn’t crucial. We know what the team is capable of and what we’re capable of.”

Frank Stippler, Audi R8 LMS ultra #16 (Audi Sport Team Phoenix), grid position 29:
“When the good times were set we weren’t able to start due to a technical problem that wasn’t our fault. Afterward we didn’t manage to catch a free lap anymore in heavy traffic. We’re not among the top 20, which means we haven’t got the best starting base. I do hope though that especially in the starting phase we won’t lose touch with the front due to safety car periods and the differences in the driver pairings in the whole field.”