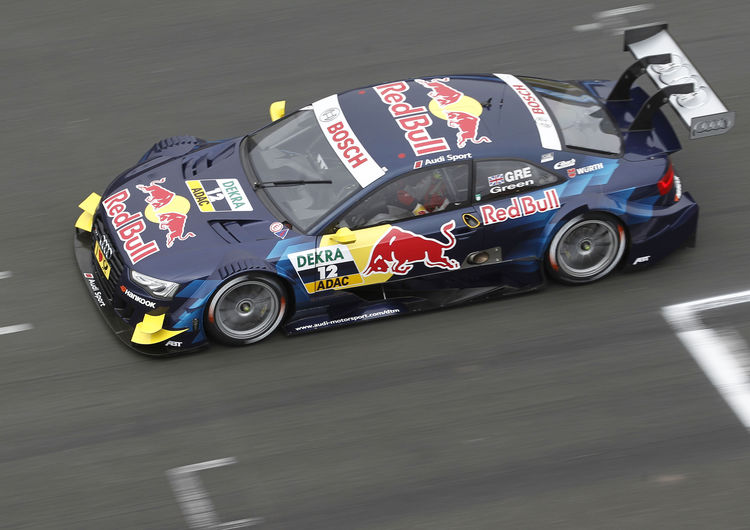 Jamie Green in Red Bull Audi RS 5 DTM on the front row of the grid, DTM leader of the standings Mike Rockenfeller on the second row – quotes from the Audi camp after qualifying for the DTM race at Oschersleben.

Dr. Wolfgang Ullrich (Head of Audi Motorsport): “I’m happy to see Jamie (Green) on the front row for the four rings for the first time and ‘Rocky’ as the leader of the standings to start at the far front. His record lap in Q3 underscores, yet again, that the RS 5 DTM is strong on all tracks. It shows how good a job our technical staff did over the winter because a year ago we had a pretty difficult time here at Oschersleben.”

Dieter Gass (Head of DTM): “We can basically be very pleased with qualifying. We’ve got six Audi cars in the top ten on the grid – that’s the solid team performance we were planning to deliver here. At least we’ve put this into reality in qualifying; I’m hoping that in the race we’ll be able to continue on a similar basis. For Mike (Rockenfeller), grid position four is no doubt a good starting base even though, when setting the fastest time in Q3, you’ve always got to look at the pole position. But with a view to the Championship and the strategic options, we can be very pleased with grid position four. Jamie (Green) continued his performance at the Lausitzring and improved by one position in qualifying. I’m sure that in the race he’ll be in contention at the front of the field.”

Jamie Green (Red Bull Audi RS 5 DTM), grid position 2
“I’m very happy about being on the front row. The conditions were very difficult; some of the laps were really slippery. We were running on slicks the whole time and were even competitive in Q4 on a completely dry track. The car was good and Audi Sport Team Abt Sportsline did a great job. That gives me a chance for victory in the race.”

Mike Rockenfeller (Schaeffler Audi RS 5 DTM), grid position 4
“A good qualifying session all in all. With the drizzling rain that kept setting in it really wasn’t easy to drive – and making the right decisions wasn’t easy for the team either. We perfectly mastered all the hurdles up until the fourth qualifying segment, but then, unfortunately, I didn’t get it together completely. That’s a shame because the front row was certainly possible today. Still, we can look toward the race with optimism.”

Filipe Albuquerque (Audi Financial Services RS 5 DTM), grid position 6
“I’m pleased. My car was very good today. Qualifying was difficult for all the drivers. I made it into Q3 and was only lacking a tenth of a second to make it into Q4. Let’s see how the race will go tomorrow.”

Miguel Molina (Audi RS 5 DTM), grid position 7
“I’m happy. After things weren’t going well in free practice this morning and we were one second behind the pace, we improved in qualifying and battled to make it into Q4. Grid position eight gives me a good starting base for the race tomorrow.”

Timo Scheider (AUTO TEST Audi RS 5 DTM), grid position 9
“It was a difficult qualifying session with the different conditions. But on the whole I was pleased with the car, except for sector two where we had a lot of motion on the front axle. That upsets me a bit. From tenth place good points are possible tomorrow.”

Adrien Tambay (Audi ultra RS 5 DTM), grid position 10
“The result could be better considering the pace we had today in dry conditions. We were a bit unfortunate with the rain and missed the right time. Hopefully we’ll be able to correct that tomorrow.”

Mattias Ekström (Red Bull Audi RS 5 DTM), grid position 13
“The result is a bit disappointing. I was too conservative on the first lap in Q2 to take advantage of the track. Then it started to rain. I had no other opportunity and was eliminated in Q2. But that’s my own fault.”

Edoardo Mortara (Playboy Audi RS 5 DTM), grid position 17
“It was raining in the beginning, the conditions were difficult and I was cautious on the first laps. When the track began to dry I had a good lap time. In the end, the track dried more than we’d calculated and we were out. It’s a bit like it’s been in the whole season: We make a decision about something and it’ll go wrong. But the car actually felt very good today.”

Hans-Jürgen Abt (Team Director Audi Sport Team Abt Sportsline): “A big ‘well done’ to Jamie (Green). He and the team did everything right. In these weather conditions, that wasn’t eady. We can be very pleased with grid position two and have got a great starting base for the race.”

Ernst Moser (Team Director Audi Sport Team Phoenix): “In the DTM this year, every qualifying session is thrilling and here at Oschersleben the weather god even added some more spice. As a result, we’ve aged by a few more years within an hour and a half yet again. But in the final analysis, we did all the right things. I’m very pleased with grid positions eight and four by Miguel (Molina) and Mike (Rockenfeller). Miguel, versus the free practice session, clearly improved and ‘Rocky’ was among the front runners in all qualifying segments.”

Arno Zensen (Team Director Audi Sport Team Rosberg): “It was a pity for Edo (Mortara). We were surprised that the times today kept getting faster as the day went on. He dropped out of Q1 with five hundredths of a second. That was our mistake. Filipe’s (Albuquerque) sixth place is a solid result. We can build on that in the race tomorrow.”