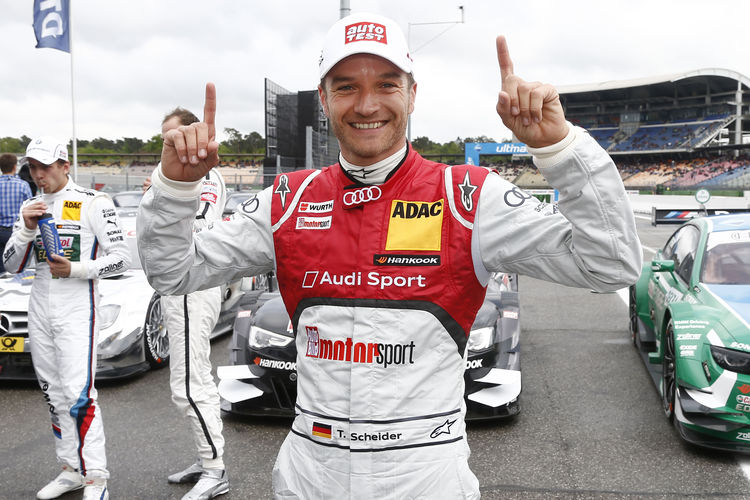 First DTM race of the season, first pole position for Timo Scheider, Audi Sport Team Abt Sportsline and the Audi RS 5 DTM. Quotes after qualifying at the Hockenheimring.

Dr. Wolfgang Ullrich (Head of Audi Motorsport): “After a winter of intensive work in which we tried to squeeze the optimum out of the Audi RS 5 DTM, grid position one at the first race of the season is a nice reward for the entire squad of Audi Sport, our three teams and the suppliers who worked extremely hard over the past few months. Today, we could see how close the competition is again this year in the DTM. The spectators can look forward to an interesting race tomorrow.”

Dieter Gass (Head of DTM): “Well done to Timo Scheider, his engineer and Audi Sport Team Abt Sportsline: They did everything right today in these extremely difficult conditions and deserve clinching the pole position. But I think that qualifying was just a foretaste of the race tomorrow, which not least due to the conditions today will be a journey into the unknown. Of course it’s our aim to make it into the top ten with more than two cars.”

Timo Scheider (AUTO TEST Audi RS 5 DTM), grid position 1
“When you analyze the data in the winter, of course your wish is to do everything better in the new season. We had a rough winter with respect to the development. But I, personally, wanted to improve compared to the previous years as well. Being on the pole position after the first day in the 2013 season is an incredible feeling and is very good for the team too.”

Mattias Ekström (Red Bull Audi RS 5 DTM), grid position 5
“I’m happy with qualifying. My new engineer Florian (Modlinger) and his guys did a perfect job in the wet. In the end, I was struggling a bit in mixed weather and my driving wasn’t perfect. I didn’t make any mistakes but drove too conservatively.”

Jamie Green (Red Bull Audi RS 5 DTM), grid position 12
“It was a bit frustrating because we couldn’t squeeze the maximum out of the rain tires in the conditions of a drying track. That’s why, in the end, I didn’t have enough grip when the track got drier. As a result, it was only enough for twelfth place.”

Adrien Tambay (Audi ultra RS 5 DTM), grid position 13
“Compared with free practice on Saturday morning qualifying wasn’t so bad. I only missed Q3 due to a small mistake in the last turn. In the end, we were struggling a bit with the tires but I probably pushed a little too much when the track became drier. We’re starting in the middle of the field, which is always a bit dangerous here at Hockenheim. But I’m going to try and have a good first lap and then continue to battle my way forward.”

Mike Rockenfeller (Schaeffler Audi RS 5 DTM), grid position 14
“Grid position 14 is disappointing. We were running well when it was really wet. In the mixed conditions we did something wrong. Even in Q1 nothing was possible anymore and Q2 was a real catastrophe for me.”

Filipe Albuquerque (Audi Financial Services RS 5 DTM), grid position 16
“In Q1, my performance was good. I was struggling with the set-up because my car had understeer but I managed to compensate for that pretty well and was able to drive a fast lap. But in Q2 it was impossible for me to improve. Something wasn’t right; maybe it was the air pressure.”

Miguel Molina (Audi RS 5 DTM), grid position 18
“This wasn’t the best way to start into the new season. I had traffic in Q1 and wasn’t able to drive a fast lap. That meant it was over for me right after Q1. Tomorrow we’ve got to try and do as good a job as possible of putting the new regulations on track in the first race.”

Edoardo Mortara (Playboy Audi RS 5 DTM), grid position 19
“For me, it was a tough qualifying session. We were a bit unfortunate with the conditions and probably didn’t manage making some minor settings on the tire pressure perfectly. The track was starting to dry and I think that our set-up was more suitable for the wetter track because I wasn’t able to improve as much as the other drivers.”

Hans-Jürgen Abt (Team Director Audi Sport Team Abt Sportsline): “Getting started again after such a long winter with such a result at Hockenheim makes me proud. That’s the reward for the work done by Audi and our team over the past few months. We didn’t know for a long time where we stood. But due to the perfect work of our team and of course of Timo (Scheider) in today’s difficult conditions we clinched the pole position. We can all be very pleased with that.”

Ernst Moser (Team Director Audi Sport Team Phoenix): “After free practice in the rain we were pretty confident. When it was still very wet at the beginning of the qualifying session both drivers were happy. When the track began to dry we had difficulties with the tires, neither of our two drivers was able to improve toward the end of Q1. Miguel (Molina) was eliminated while ‘Rocky’ had a better lap time and moved on. In Q2, we wanted to take advantage of the drying track at the end and only go out then to set our time. But we didn’t manage to do that either. Now we’ve got to advance in the race from unfortunate positions. But thanks to the regulations a lot is possible. We can probably recover quite a bit in the race.”

Arno Zensen (Team Director Audi Sport Team Rosberg): “Congratulations to Dieter Gass and to Timo Scheider. We don’t know exactly yet what we did right or wrong. We’ll only find out in the race on Sunday whether our set-up is on the mark or not. In any event, it’ll be very thrilling.”