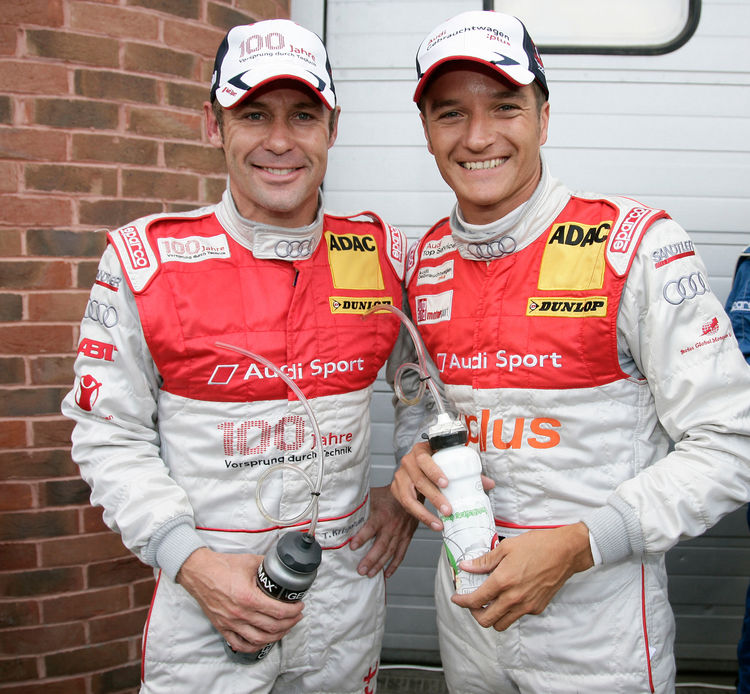 In the British DTM round at Brands Hatch on Sunday one Audi and one Mercedes, respectively, will start to the race from each of the first four rows. Quotes after a thrilling qualifying with extremely narrow time gaps.

Dr. Wolfgang Ullrich (Head of Audi Motorsport)
“I’m happy with the result and particularly pleased about Timo (Scheider) starting from the front row. Like last year, Paul Di Resta is next to him, albeit in the reverse order this time. If Timo manages a good start he may even have the chance to take the lead. In any event, it’ll be a very tough race because even today we were able to see how close the vehicles are to each other. Tomorrow morning we’re going to do a couple of long runs in order to find a good base strategy. Nevertheless, reacting as quickly as possible in the race will be crucial. The extremely short lap time calls for fast and precise decisions. This is a big challenge for all the teams.”

Timo Scheider (GW:plus/Top Service Audi A4 DTM 2009 #1), grid position 2
“As expected, we experienced an extremely close qualifying today. With a view toward Mattias (Ekström) and Gary (Paffett) – my closest rivals at the moment – who are only starting from positions six and seven, I’m very happy with second place on the grid. Particularly here at Brands Hatch the front row is very important because overtaking is difficult and strategy will play a major role.”

Tom Kristensen (100 Jahre Audi – A4 DTM 2009 #2), grid position 3
“What a thrilling qualifying. Congratulations to Paul (Di Resta) on clinching the pole position, Timo (Scheider) and I behind him are separated by just six thousandths of a second. My A4 was fast all day and despite slight understeer on the crucial lap, it was enough to finish third in the end. To be honest, this isn’t exactly the place you like to start from at Brands Hatch: It’s the position in a small dip directly alongside the wall. So, I’ll give my very best to get out of there as quickly as possible.”

Martin Tomczyk (Red Bull Cola Audi A4 DTM 2009 #6), grid position 5
“I’m quite happy, albeit not with the final qualifying segment. I slightly slipped off the brake pedal in the last turn, which was a little disconcerting. That’s why I had to drive a larger radius and hit some dirt while accelerating. That was crucial because it kept me from making it into the final qualifying.”

Mattias Ekström (Red Bull Audi A4 DTM 2009 #5), grid position 7
“I was simply not fast enough. The car was not completely perfect after some minimal changes. But the same is true of my driving style as well. I’m starting from seventh place. That’s not a dream result but, as always, I’ll give all I’ve got on Sunday.”

Oliver Jarvis (Audi Cup A4 DTM 2008 #15), grid position 9
“Actually, things were going pretty well but in Q2 I unfortunately made a small mistake on my first set of tires. Then we put on the second set but there was heavy traffic right after the pit lane. In the end, I was just lacking five thousandths. But that’s racing. Now I’m looking forward to Sunday and am hoping for a strong race.”

Markus Winkelhock (Playboy Audi A4 DTM 2008 #12), grid position 10
“In Q2 I’d been hoping to be able to improve my time on the second set of tires. For some reason my balance wasn’t as good as on the first set. I’m not unhappy with tenth place but we had definitely set our sights on making it into Q3. Olli (Jarvis) and I just missed it. Usually things go better in the race than in qualifying, that’s why I’m hoping for a better result on Sunday.”

Mike Rockenfeller (S line Audi A4 DTM 2008 #11), grid position 12
“As early as in free practice the balance of the car wasn’t right at all. In qualifying it was a bit better. But only finishing in twelfth place in the end is definitely a disappointment. On the other hand it was very difficult to even make it into the third qualifying with a year-old car.”

Alexandre Prémat (Audi Bank A4 DTM 2008 #14), grid position 15
“Qualifying was very difficult. In any event, we should have been able to make it into the second qualifying because I was only four thousandths short of Ralf Schumacher. At the last moment he bumped me from 14th place. Of course I’m disappointed. It was really not easy, particularly considering that we still had a small brake problem in the morning.”

Katherine Legge (Audi Collection A4 DTM 2008 # 21), grid position 16
“Qualifying went very poorly because our timing was unfortunate. I simply wasn’t able to find a gap. It was a bit like a game of dominoes because everyone was obstructing everyone else. In four trials I wasn’t able to drive a single free lap. We’re much faster than we showed. The same is true for Alex (Prémat). I’m hoping we’ll be able to move forward through the field, although that’ll be difficult.”

Hans-Jürgen Abt (Team Director Audi Sport Team Abt Sportsline)
“With places two and three, we still clinched an optimum result .This is a superb starting base, also with respect to the championship and our rivals. Timo (Scheider) is starting relatively far at the front compared with Gary Paffett. It’ll be an exciting race on Sunday.”

Ernst Moser (Team Director Audi Sport Team Phoenix)
“In qualifying we saw how close the times are together on this circuit. Oliver (Jarvis) was lacking a few hundredths to get into the top eight. But there are no ifs and buts about it – the lap has simply got to fit. We were short of a few hundredths, that’s why we’re on position nine – too bad. With Alex (Prémat) you could see that he was missing the time he lost in the morning’s practice. He didn’t manage a perfect lap.”

Arno Zensen (Team Director Audi Sport Team Rosberg)
“We knew that things would be pretty close. But comparing our times with those from last year, we’ve got nothing to be ashamed of: Back then, our best time was 42 seconds, now we posted 41.7 seconds. I wouldn’t have thought that. And, considering the narrow gaps, I’m not really unhappy with positions ten and twelve. That’s roughly what we expected.”