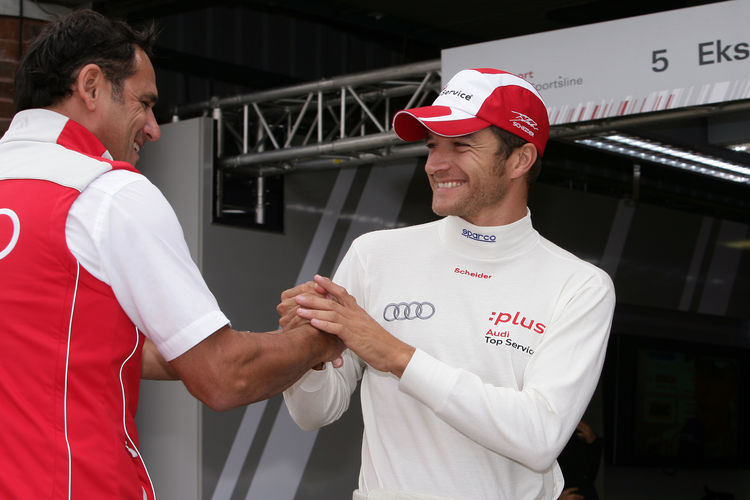 Title defender Timo Scheider as the best Audi driver will start from position three at the DTM’s round at Brands Hatch (Sunday starting at 1:45 p.m. – German time – live on “Das Erste”). Five Audi A4 DTM cars are on the five front rows. Quotes from the Audi camp.

Dr. Wolfgang Ullrich (Head of Audi Motorsport)
“Unfortunately, we again only managed to put one of our cars into the top four. Timo (Scheider) confirmed his good performance from Zandvoort and is again our best driver. In the most recent races we unfortunately had two poor starts from the pole position. I think the motivation to make a good start here is particularly high. Maybe we’ll be able to grab a couple of positions at the start. We had a very good performance on Friday across long runs. We’ll try and repeat this in the race.”

Timo Scheider (GW:plus/Top Service Audi A4 DTM #1), grid position 3
“I’m very pleased with position three. Especially for me personally it was important to show that my performance in qualifying at Zandvoort wasn’t a nine days’ wonder. I managed to do this. But for us it’s about beating Mercedes. They were a bit stronger today. Now I’m banking on our performance over the long run, which was very good in practice on Friday. Then we’ll see how we can convert this on Sunday.”

Mattias Ekström (Red Bull Audi A4 DTM #5), grid position 6
“My last trial was basically very good, but we were simply not quick enough. We didn’t manage to get the best performance out of the tires. And if that’s the case you’re simply not on one of the front rows in the DTM.”

Oliver Jarvis (Tabac Original Audi A4 DTM #2), grid position 7
“Things were looking pretty good up to the third qualifying, and then I was struggling with a tendency toward understeer. I made a mistake as well and we lost two tenths. I’m hoping for a good race on Sunday in which I’ll be able to make up a few positions.”

Miguel Molina (Audi Bank A4 DTM #18), grid position 8
“The first and the second qualifying went very well. In the third qualifying I no longer managed a good lap. The car was good but I wanted to change something about my driving style. Tomorrow will be about gathering as many points and as much experience as possible.”

Martin Tomczyk (Red Bull Cola Audi A4 DTM #6), grid position 10
“At Brands Hatch we experienced a difficult qualifying. There were no particular phenomena for me to complain about. Looking at the factors car, team and driver I’ve got say that I was simply too slow.”

Alexandre Prémat (TV Movie Audi A4 DTM #9), grid position 11
“Qualifying on this track with the narrow time gaps is always very difficult. Although I only finished in eleventh place our times weren’t really far away for our car to have taken a place among the top eight. Unfortunately, there was some gravel on the track on my last lap. Consequently, I was struggling with under- and oversteer and lost two or three tenths, which prevented me making it into Q3. But, starting from position eleven means that a result in the points is still basically possible.”

Mike Rockenfeller (S line Audi A4 DTM #10), grid position 13
“I had zero grip. It was totally difficult. I think the times show that. Something isn’t right. On the first laps the tire doesn’t provide any grip whatsoever. It’s very frustrating when there’s nothing you can do. You give everything, but more than that just isn’t possible.”

Katherine Legge (Glamour Audi A4 DTM #15), grid position 15
“Unfortunately, I’ve not been out on the track enough so far this weekend. In the end, I was lacking one thousandth to make it into the second qualifying. In that case it would have been possible to fight with ‘Rocky’ and Prémat. But unfortunately it wasn’t enough for that. Still, I’ve got a more positive feeling after the qualifying than I did after the previous practice sessions this weekend. Now, we’ve got to move forward in the race.”

Markus Winkelhock (Playboy/GW:plus Audi A4 DTM #14), grid position 18
“I normally hesitate to say that a car is not drivable. But today it was extremely difficult. I wasn’t able to get along at all after things had actually not been that bad in free practice. Even then the car tended to oversteer, but it was still controllable. There are about two or three courage corners here and that’s where I was really in awe of the car. More than that wasn’t possible.”

Hans-Jürgen Abt (Team Director Audi Sport Team Abt Sportsline)
“It was incredibly tight. Everyone was fighting for the top; just Paul Di Resta achieved a large gap. He was driving in a different world. We’re certainly a bit disappointed because we had higher expectations. We didn’t manage a solid team performance either. Now we’ve got to concentrate on the race and make the best of it.”

Ernst Moser (Team Director Audi Sport Team Phoenix)
“We haven’t been where we wanted to be all weekend. Our drivers are saying that they simply haven’t got enough grip on new sets of tires. That means we can’t do a good job on the crucial one or two laps. Now we need to analyze and work toward the race in the warm-up as well. Starting farther at the front is easier on any track. But on this short circuit a position on the rear of the grid is even more difficult.”

Arno Zensen (Team Director Audi Sport Team Rosberg)
“Katherine (Legge) drove pretty well. It’s a shame she didn’t get to drive enough in the morning. Otherwise she could have done better than to admit defeat to Maro Engel by one thousandth. Considering the few laps she drove she was running well. Markus (Winkelhock) on the other hand experienced a disaster. That’s a total mystery to me.”