Quotes after qualifying at Barcelona 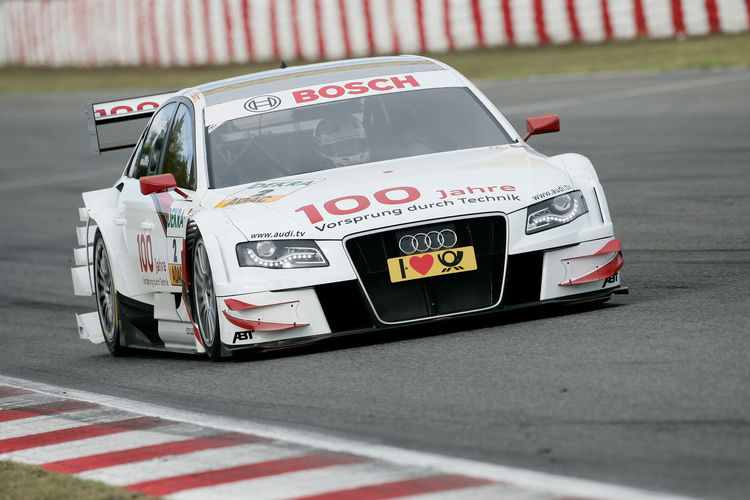 Tom Kristensen secured the seventh pole position in the current DTM season for Audi at Barcelona. Martin Tomczyk, who took position three, showed a strong performance as well. Quotes after a qualifying that promises a thrilling race on Sunday (starting at 1:45 pm – German time – live on “Das Erste”).

Dr. Wolfgang Ullrich (Head of Audi Motorsport)
“That was an extremely exciting and close qualifying. There were shifts in each of the sections up to the last minute. Hundredths and thousandths determined whether you’d advance or not, including in the decision about the four top slots. I’m very pleased about Tom (Kristensen) having clinched pole because he demonstrated yet again how fast he is and that he definitely continues competing in the DTM with a high level of motivation. He can extract the maximum performance from any car you give him. Martin (Tomczyk) again confirmed that he’s in ‘very good form’ at the moment. Although things were looking good for Timo (Scheider) and ‘Eki’ in the morning, they didn’t quite reach the one-hundred-percent-mark in qualifying. Although that means they’re in good company as far as their rivals for the championship are concerned, they’re further towards the back of the grid than they’d planned to be. I think these are optimum prerequisites for the spectators to witness an extremely captivating race on Sunday.”

Tom Kristensen (100 Jahre Audi – A4 DTM 2009 #2), grid position 1
“Wow, fantastic: pole – that’s tremendous! The guys worked very hard to prepare the car again after my accident at Brands Hatch. There, I was fighting for pole as well and had two fastest sectors in Q4, but only finished third in the end. My engineer Franco (Chiocchetti) did a very good job of optimizing the car here using the camber parameters. At Barcelona, temperature will have a crucial effect on the outcome of the race. I’m hoping to have a trouble-free round again for a change.”

Martin Tomczyk (Red Bull Cola Audi A4 DTM 2009 #6), grid position 3
“Of course I’m happy considering the fact that I didn’t have a new set of tires anymore for the fourth qualifying. It’s always tricky when you’re about to start to section four, knowing you’ll really have a hard time advancing to first or second place. I gave all I had and am only two-and-a-half tenths behind the drivers who were running on new tires. I’m pleased with that. A better result just wasn’t possible.”

Timo Scheider (GW:plus/Top Service Audi A4 DTM 2009 #1), grid position 6
“Sixth place isn’t a dream result. But things just didn’t fit perfectly in Q2 and 3. I didn’t get the front wheels to work the way they should have. The lap wasn’t perfect all the way. And considering the close gaps today that simply meant there was no chance to make it into Q4. That was a bit frustrating. In the end, Tom (Kristensen) drove the lap that resulted in pole – ‘well done’ to him. So the car’s able to do it, which gives me a positive feeling. My immediate rivals, Paffett and Ekström, are behind me anyway. With respect to the championship, that’s relatively okay.”

Mattias Ekström (Red Bull Audi A4 DTM 2009 #5), grid position 7
“Everything felt really good. But in Q3 I was definitely not quick enough. I didn’t really make any major mistakes. I was simply a little too slow. It’s consoling to some extent that Gary (Paffett) and Timo (Scheider) aren’t much further in front either. Tomorrow will be exciting!”

Alexandre Prémat (Audi Bank A4 DTM 2008 #14), grid position 8
“From start to finish it was an intense qualifying. Eighth place is a good result for a year-old car. I made it all the way into the third qualifying and am very pleased for the team and for me. We’ve had a rough season so far. After arriving at Barcelona I concentrated extremely on the weekend. Back home I also spent the past month intensely working on being highly focused and showing a good performance on the race weekends.”

Oliver Jarvis (Audi Cup A4 DTM 2008 #15), grid position 9
“We were missing a bit of racing luck otherwise we’d have made it into the third qualifying. Alex (Prémat) was running fantastically, while I had to fight a little in sector three. In the end, though, grid position nine is quite alright. I look positively toward the race. Hopefully I’ll be able to improve my lap time in the third sector a little more. In that case, a good race should be possible.”

Markus Winkelhock (Playboy Audi A4 DTM 2008 #12), grid position 12
“My qualifying wasn’t completely perfect. At least things went much better for me on new tires than in free practice when we really had problems. On used tires the car had been okay then, but on new tires I had extreme understeer. Then we made some changes to the car which improved handling somewhat. I had to get used to the changes first.”

Mike Rockenfeller (S line Audi A4 DTM 2008 #11), grid position 13
“I admit that I’d been hoping to be closer to the front of the grid. The car felt completely different than it had in free practice. I was quite happy with the time in the last sector compared with the time in free practice. But in the first two turns the situation was much worse in qualifying than it had been in the morning. I had problems with oversteer. In the first turn it occurred on a hump and then the car felt nervous in every other corner. In the end, I lost time there on every set of tires. No matter what I did, it was difficult to drive faster there. So, 13th place is the best one can do in a situation like that.”

Katherine Legge (Audi Collection A4 DTM 2008 # 21), grid position 17
“Qualifying was a catastrophe because after the free practice we’d been hoping to finish among the top ten. For some reason, the brakes weren’t perfect in qualifying. Now I’ve got to try and make up ground on Sunday.”

Hans-Jürgen Abt (Team Director Audi Sport Team Abt Sportsline)
“It was very tight. You could see that nobody could afford to make any mistakes. Mattias (Ekström) and Timo (Scheider) didn’t manage really perfect laps. So, they’re on positions six and seven. Now they’ve got to try and move forward. ‘Well done’ to Tom Kristensen. He did a super job in every respect. Martin Tomczyk showed a great performance too. We can be happy with the team result.”

Ernst Moser (Team Director Audi Sport Team Phoenix)
“I think our team performance is right. Both cars fought for a place among the top eight and were thus the best year-old cars. With our weight rating at Barcelona we really couldn’t have done much better. I’m very pleased with both drivers. One of them, Alex (Prémat), was really quick straight from the start, and the other one worked his way forward. Together with their engineers and mechanics the guys did a very good job in qualifying.”

Arno Zensen (Team Director Audi Sport Team Rosberg)
“In free practice things didn’t go well at all when we were running well on used tires but not on new ones. That’s why I was surprised that the times we posted in qualifying came close to those of the Phoenix cars again. Markus Winkelhock was just lacking eight hundredths to Oliver Jarvis. But now Alexandre (Prémat) has come back and is the quickest driver of a year-old car. Of course I’m not happy with grid positions twelve and 13. But there’s a long race ahead of us.”