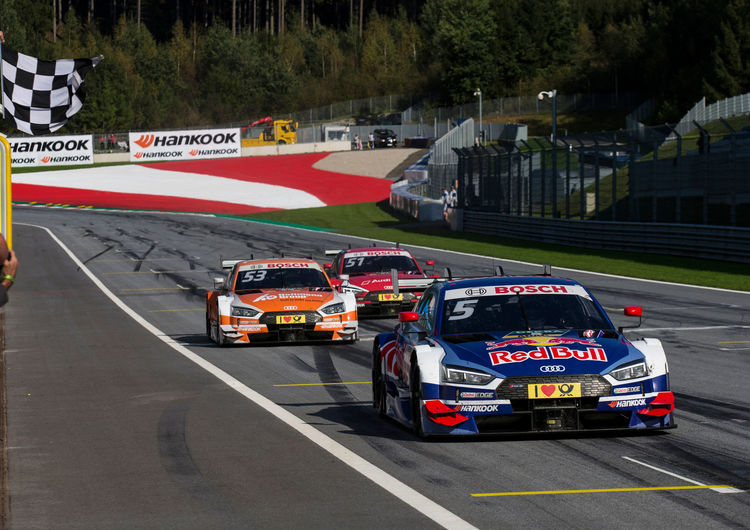 With a victory in Saturday’s race at the Red Bull Ring in Spielberg, Austria, Audi driver Mattias Ekström has come a step closer to his big dream of winning his third DTM title after 2004 and 2007. Jamie Green and Nico Müller, in positions two and three, perfected an Audi one-two-three success.

Ekström had laid the foundation for his first victory this season and 23rd one in total in his DTM career in the morning. From position three on the grid, the Swede from Audi Sport Team Abt Sportsline initially managed to overtake his teammate Nico Müller and five laps before the finish Jamie Green (Audi Sport Team Rosberg) as well, who had been leading the race up until that time and was running on used tires following his pit stop.

“The basis for the good race result today was qualifying, which I was very proud of,” said Mattias Ekström. “That hasn’t really been my greatest strength. From position three on the grid behind two Audi colleagues, the main thing was to stay in front of Marco Wittmann at the start. Fortunately, I managed to do that. Afterwards, everything went perfectly. Although, at first glance, I have a big advantage now, the tables can turn very quickly again in the DTM.”

Ekström extended his advantage over Mercedes-Benz driver Lucas Auer to 31 points. Marco Wittmann is trailing him by six points following Saturday’s race as the best BMW driver. Jamie Green who, for the first time since his victory at the Lausitzring at the end of May, mounted the podium again managed to insert himself between Ekström and Auer. The Briton posted best times in both free practice sessions, secured the pole position and led the race for a long time as well. “My car was perfect, especially on the first set of tires,” said Green. “But in the end, Mattias came up from behind with DRS and with a view towards the championship, today was also about teamwork.”

On clinching position three and his first podium result this season, Ekström’s teammate at Abt, Nico Müller, perfected Audi’s one-two-three win, plus a special birthday of Team Director Thomas Biermaier who turned 40 on Saturday.

With Mike Rockenfeller from Audi Sport Team Phoenix in seventh place, another Audi driver finished in the points. In a fiercely fighting pack that began in position four, the German was entangled in tussles just like René Rast who, following a disappointing race, finished in position 13 and remained without points. Following an excursion in qualifying, Loïc Duval from the last row on the grid still advanced to 14th place.

“A superb race for us,” said Head of Audi Motorsport Dieter Gass. “The guys at the front did a great job and were really running fast. They obviously benefited a little from Robert Wickens having slowed the whole field with a damaged car so that the field behind position four was superbly close together again. That made it easier for us to bring our one-two-three win home.”

For the second race on Sunday (start at 3.15 PM CEST) changeable weather has been forecast in Spielberg.