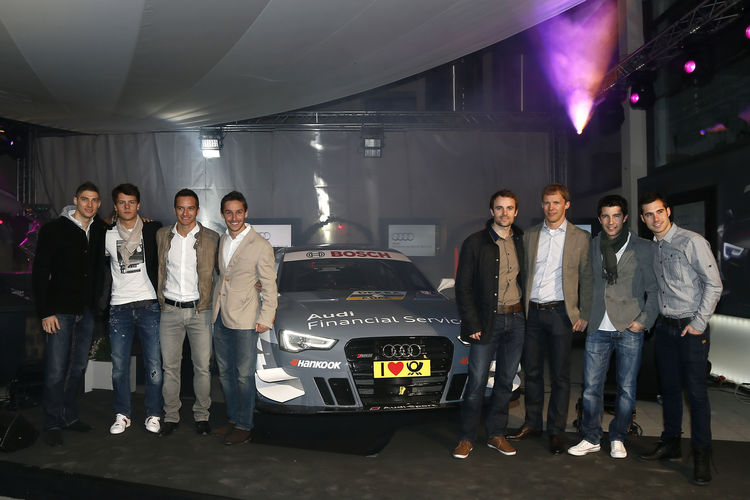 Audi staged an impressive launch on Thursday evening to signal the start of the crucial preparation phase for the season opening in exactly one month. The event was attended by almost 500 guests from sport, industry and the media. At the heart of the turmoil in the Munich trend restaurant H’ugo’s: the eight DTM drivers, Motorsport Boss Dr. Wolfgang Ullrich and numerous VIPs.

If this evening was a foretaste for the 2013 DTM season, then the fans can look forward to an exciting year: at the ‘Audi DTM Warm-up 2013’ in the Munich scene hotspot H’ugo’s, the drivers around double Champion Timo Scheider, shooting star Edoardo Mortara as well as newcomer Jamie Green appeared easygoing and relaxed, but also feisty and ready for action. “Our goal is to bring the title back to Ingolstadt,” explained Scheider on behalf of his team-mates.

Audi issued the invitation to Munich to present its squad for the 2013 season to media representatives and all other members of the DTM family. The guests had the opportunity to have a quiet chat away from the pit lane and paddock with the racing drivers, team bosses and the personalities responsible for motorsport at the four rings, and to get in tune together for the ten races. Celebrities like FC Bayern Munich star Franck Ribéry, former ski jumper Seven Hannawald and kickbox World Champion Dr. Christine Theiss happily accepted the invitation and mingled with the party troop till late in the evening.

In addition to interviews with the DTM stars and a performance by singer Giovanni Zarrella, they also eagerly followed the presentation of two Audi Sport partners: Audi Financial Services will extend his support and advertise on Filipe Albuquerque’s Audi RS 5 DTM in 2013. The financial service provider showed off the design publically for the first time on the stage at H’ugo’s. The exhaust specialist Akrapovič is represented with immediate effect by its logo on six of the eight DTM cars.

As early as next week, the Audi factory drivers swap their evening wear for racing overalls yet again: from Tuesday to Friday every driver from Audi, BMW and Mercedes-Benz meet at the Hockenheimring for the final joint test before the first race of the season on May 5.