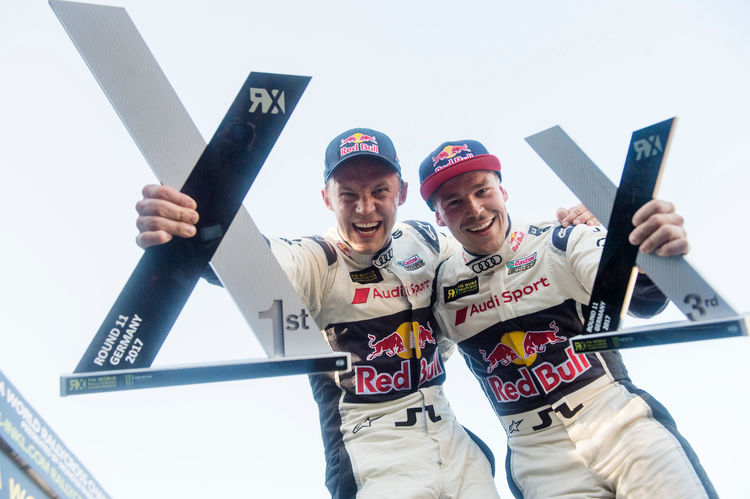 Mattias Ekström claimed his fourth victory of the season in the FIA World Rallycross Championship. The Swede won at the Estering from countryman Timmy Hansen and EKS team mate Toomas Heikkinen. Before the season finale in South Africa, Ekström holds third place in the drivers’ classification, and reduced the margin second placed overall man Petter Solberg to one point. In the teams’ classification, EKS still holds third place.

The journey to Estering paid off once again for Ekström. After the Swede wrapped up the World Championship title early in 2016 at the track in Buxtehude near Hamburg, he celebrated his tenth victory in the World Rallycross Championship this year and, in doing so, closed up on record winner Petter Solberg. “That was a fantastic weekend for us,” said Ekström. “After we won the title last year we celebrated by having a really big parts, but we also have every reason to be satisfied this time. I’m especially happy for Topi, who has had so much bad luck this season, and was finally rewarded with third place.”

Toomas ‘Topi’ Heikkinen was finally able to hoist a trophy skywards 309 days after his last podium finish in Argentina. “That was a heck of a long time, but thank God it happened here at the Estering,” said the Finn relieved. “A big thank you to the team. I just have the best guys around me and am delighted that after all the bad luck over the last few months I was finally able to give them something back.”

Reinis Nitišs in the third Audi S1 EKS RX quattro also qualified for the semi-final for the twelve best drivers. However, after contact in the notorious first corner at the Estering the Latvian spun and crossed the finish line in sixth place. “Disappointing, simply disappointing,” summarized Nitišs. “It’s clear after looking at the lap times that the final was possible, but it wasn’t to be once again. Now I still have the season finale in South Africa where I’ll be at maximum attack.” The Killarney International Raceway in Cape Town hosts a World Rallycross Championship event for the first time on November 11 – 12.