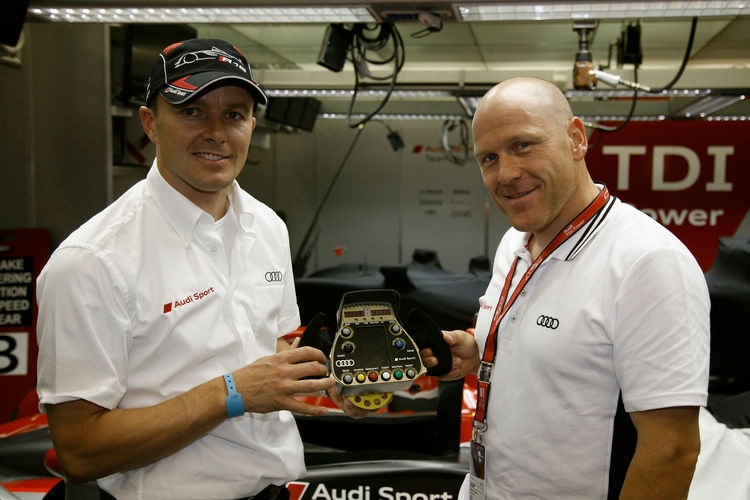 Celebrity guests, a glimpse into the future of the automobile, a presentation of the Audi A1, live broadcast on the Internet – a lot of variety was sourounding Audi Sport Team Joest’s entry in the 2010 Le Mans 24 Hours.

Like every year, the most important endurance race in the world attracted many important leaders of the Volkswagen Group too – namely Prof. Dr. Ferdinand Piëch (Supervisory Board Chairman of Volkswagen AG) and Prof. Dr. Martin Winterkorn (Chairman of the Board of Volkswagen AG). Audi Chairman Rupert Stadler and his fellow board members Michael Dick (Technical Development) and Peter Schwarzbauer (marketing and sales) also followed the 78th running of the Le Mans 24 Hours live on site.

With “Le Mans vers le futur”, a demonstration for vehicles with alternative drive systems, the Automobile Club de l'Ouest (ACO) gave an outlook on the future of the automobile prior to the start of the race. Five-time Le Mans winner Frank Biela drove an Audi-e-tron technological show-piece based on the R8. Two other concept cars from the Volkswagen Group, a Porsche 911 GT3 Hybrid and a Volkswagen Scirocco GT24-CNG with Bio Natural Gas, were also part of the parade.

Many Danish fans came to Le Mans also this year and kept their fingers crossed for Audi driver Tom Kristensen. The record winner visited the largest Danish Camp on Friday just before the Audi press conference.

On Friday morning, the four German Audi drivers Timo Bernhard, Marcel Fässler, André Lotterer and Mike Rockenfeller signed autographs in the pedestrian zone of Arnage. They were welcomed by the Mayor André Langevin, who had a little gift for each of the drivers.

The Audi A1 made a great appearance at Le Mans. The “next big Audi” was presented to the spectators at the track in the “AreA1”. Integrated into an exceptional modular architecture that is similar to the single frame of the A1, the guests in the "AreA1" were able to learn more about the car in different modules. The “AreA1” tour will cointinue after Le Mans in various European cities.

The band “Torpedo” performed live acts in the “AreaA1” at Le Mans.

A special service was offered to the fans by Audi tv: At www.audi.tv it was possible to follow the Le Mans 24 Hours live from the cockpits of the three Audi R15 TDI cars. All three vehicles were equipped with on-board cameras.

About 300 Audi employees experienced the Le Mans 24 Hours at the Audi Camp – including a barbecue, Football live TV and music from the Band “Moscitos”.

Oliver Jarvis, who drove an Audi R10 TDI of the private Kolles team at Le Mans, was awarded the “Rookie of the year” trophy for being the fastest newcomer in qualifying.

Frank Biela and Lucas Luhr worked as Co-Commentators for Eurosport at Le Mans. Biela experienced an unpleasant surprise on Saturday morning when he discovered that thieves had broken into his Audi RS 6 during the night and stolen personal items.

Oliver Jarvis was also the victim of thieves: Just before the warm-up session, the DTM driver realized that his complete racing gear was stolen. The Briton had to borrow equipment from his fellow drivers at Audi Sport Team Joest.