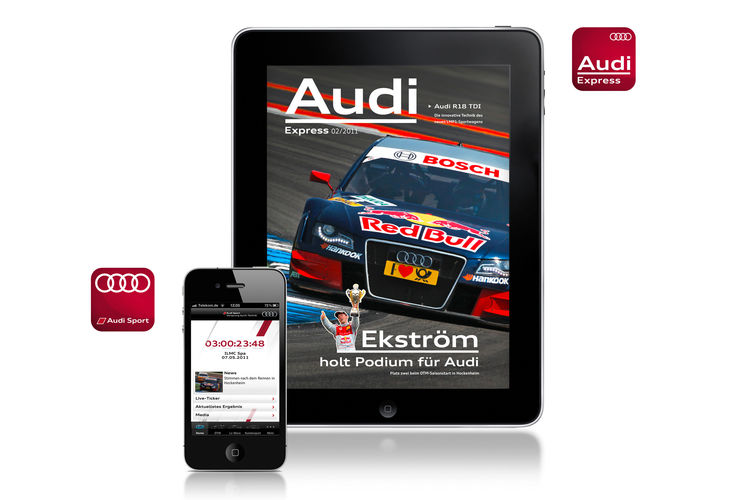 Audi accompanies its motorsport involvement in the 2011 season with two new Apps for the iPhone and iPad.

The 2011 version of the “Audi Sport” App for both the iPhone and iPod Touch is available as update to download for free from the App Store in time for the start of the DTM season and the Audi R18 TDI prototype’s race debut in the Intercontinental Le Mans Cup (ILMC). The App gives journalists and fans the opportunity to be permanently up-to-date even when they are travelling.

In 2010 race reports, results, photos, sound bites and videos were already standard content for the Audi Sport App, which can now claim more than 40,000 downloads. The latest version is not only adapted to suit the brand’s new motorsport look. It also offers numerous new functions and features such as an expanded Live Ticker that actually shows which driver is at the wheel during endurance races, 360 degree images of the race cars, interactive introductions to the race tracks and wallpapers. Accredited media representatives can take part in the popular Audi DTM sweepstakes when on the move, view media appointments and order TV footage. The App was also adapted to the iPhone’s retina display.

Audi is also a step ahead of the competition on the popular iPad: a digital “Audi Express” iPad edition, which reviews the race weekend and also delivers a look behind the scenes of Audi’s multifaceted motorsport program, is published after every DTM and Intercontinental Le Mans Cup (ILMC) race. The “Audi Express” displays media information released by Audi Communications Motorsport in multimedia format and should supply journalists with stimulus for their own reports. The digital “Audi Express”, which is published every Tuesday after a race, is also available to download for free for all motorsport fans.

Like the race cars, both Apps are developed throughout the season and new features made available for users in the form of updates via the App Store.

The direct link to both Apps in the App Store: