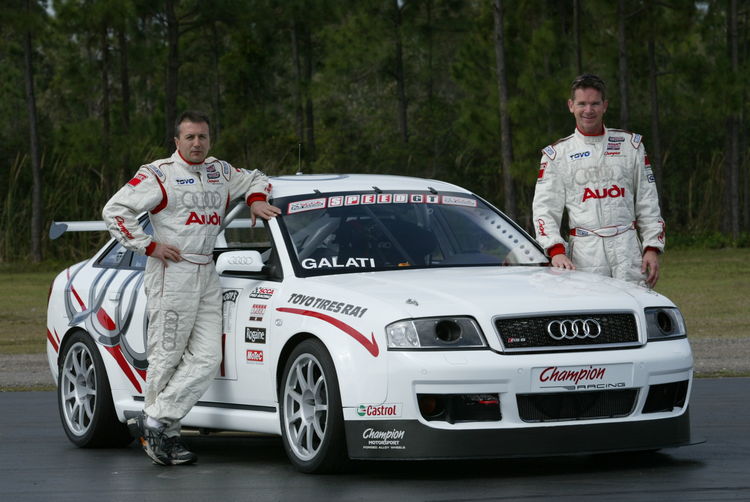 Champion Racing campaigned an all-wheel-drive Audi S4 “Competition” for the past three seasons but takes on the new bi-turbo, 4.2-liter V8-engined RS 6 “Competition” currently being built at its impressive Pompano Beach race facility in readiness for the season-opener at Sebring on March 14. In “standard” road-going guise, Audi’s latest four-door, performance sedan boasts 450hp.

Ohio-based Galati (43) finished second in 2000 but has won the GT title for the past two years with Champion Audi. In 30 races spanning the last three years, Galati steered his Champion Racing S4 home to eight wins plus 15 other top-six finishes. This success was achieved despite varying levels of weight ballast imposed by the organising SCCA to compensate for the Audi’s all-wheel-drive advantage over its more powerful rivals.

“I’m still hungry for success,” commented Galati who bids for an unprecedented sixth career SCCA SPEED World Challenge title. “I’m especially excited about driving a brand new car this season - it should be very competitive and has bags of potential. I’m looking forward to developing the RS 6 throughout the season and also to working with Randy – I believe we’ll quickly become a very formidable team.”

“We began talks about racing an Audi RS 6 “Competition” last May having received eligibility confirmation from the SCCA and took delivery of two, raw chassis three months ago,” confirmed Mr Maraj. “Audi AG and quattro GmbH, Audi’s performance subsidiary in Germany, have both been very helpful but due to our late start on the project, our test plans are for sometime in late February.

"We are all very excited about racing the Audi RS 6 ‘Competition’. With team newcomer Randy Pobst, and having retained Michael Galati, I believe Audi has a good opportunity to win the Manufacturers" Championship again."

Pobst contested seven Speed World Challenge races last year, scoring four wins to finish third in the championship standings. “I"m thrilled to have this opportunity with Audi," confirmed Pobst. "I"m very excited about the new RS 6 and I believe Michael and I will compliment each other perfectly."

Rod Bymaster, Audi North America’s Motorsport Manager, added: “We are looking forward to the 2003 season with the new cars and driver line-up. Having Michael and Randy will give us the most talented and experienced drivers in the series while Champion Racing has constructed two very good race cars which we feel will be very competitive.”

Five-times Le Mans 24 Hour race winner Bell could still drive a third Audi RS 6 “Competition” on occasion. Bymaster concluded: “We would like to have Derek participate in selected races if his busy schedule allows it and if we can get a third car constructed.”