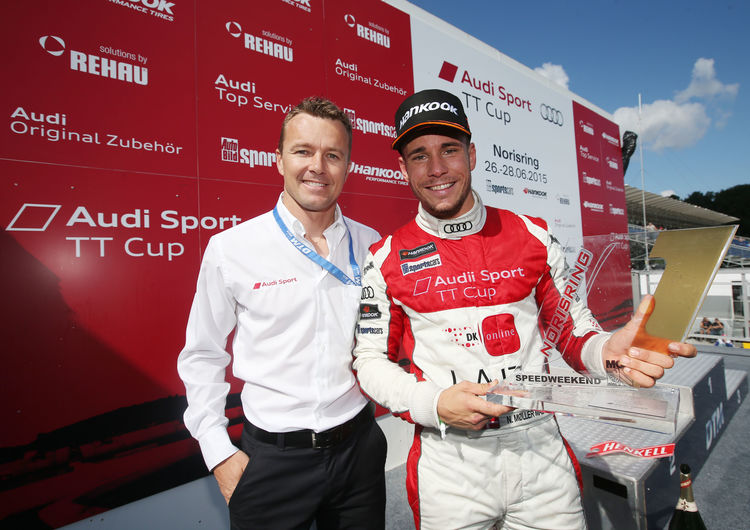 Nicolaj Møller Madsen (DK) has won race two in the Audi Sport TT Cup at the Norisring. Following three podium places, the Dane secured his first victory in round four of the season, and after the second of six race weekends, is leading the drivers’ standings. Shaun Thong (HK) won the first race on Saturday.

Four races, four different winners: Following the season opener at Hockenheim, the up-and-coming drivers in the Audi Sport TT Cup at the Norisring again impressively proved the high standard of driving skills in the new Audi one-make cup that is held as part of the DTM. At the city street circuit in Nuremberg, the drivers delivered two gripping races to the crowd with suspense from lights to flag. “It was a perfect home round,” says Rolf Michl, Project Leader Audi Sport TT Cup. “The spectators again saw exciting duels and our three noble guest entrants added even further value to the Audi Sport TT Cup. It could have hardly gone any better – except for the rain on Saturday.”

Møller Madsen started the race from grid position five and took the lead on the eighth of 25 laps. After crossing the finish line, the 22-year-old patted the roof of his cup car with joy, cheering his first win of the season in the style of Hans-Joachim Stuck, who celebrated the first victory for Audi at the Norisring in the Audi V8 quattro 25 years ago. On seeing the checkered flag, Møller Madsen had a 2.737-second advantage over Jan Kisiel (PL). Third place went to Mikaela Åhlin-Kottulinsky (S), who was the first and only woman in the VW Scirocco R-Cup last year to have clinched a victory in the one-make cup.

The first race at the Norisring was won by Shaun Thong. From pole position, the driver from Hong Kong, who is only 19, took a lights-to-flag victory and was presented with the winner’s trophy by Head of Audi Motorsport Dr. Wolfgang Ullrich. Thong was trailed by Kisiel and Møller Madsen in positions two and three.

Victory in the guest drivers’ classification in both races was secured by Jordi Gené (E). The professional race driver twice notched up the top spot ahead of Marcus Graf von Oeynhausen-Sierstorpff (D) and Playmate Doreen Seidel (D). The prominent guest drivers Pierre Casiraghi (MC) and Albert von Thurn und Taxis (D) were dogged by bad luck throughout the weekend. Spins they were not at fault for and a puncture prevented podium places for the two noblemen.

Following the second race weekend of the Audi Sport TT Cup, Møller Madsen is leading the overall standings with 85 points, trailed by Jan Kisiel (65 points) and Dennis Marschall (D, 56 points). The next races in the Audi Sport TT Cup will be held at the Red Bull Ring in Spielberg (A) on August 1 and 2.