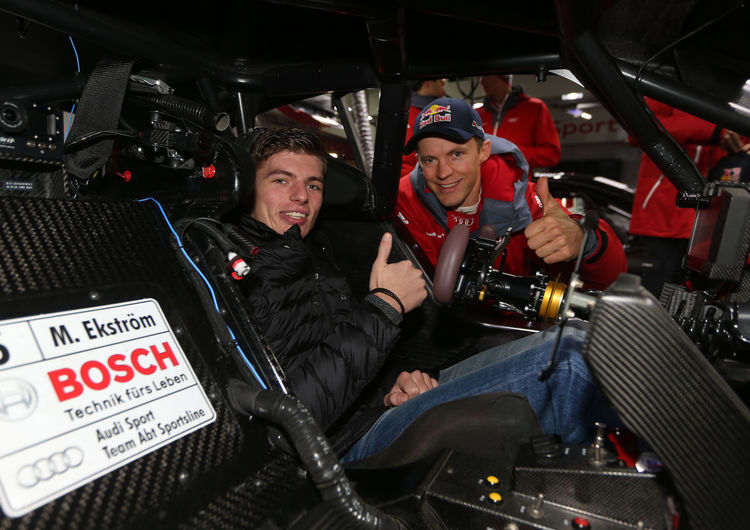 The oldest DTM driver receives support by the youngest Formula One driver of all time in the finale at Hockenheim. The 18-year-old Dutchman Max Verstappen is keeping his fingers crossed for the two-time DTM Champion Mattias Ekström (37/Sweden) in the garage of Audi Sport Team Abt Sportsline this weekend.

The two race drivers are linked by a common partner. Mattias Ekström competes in an Audi sporting the colors of Red Bull in the DTM in an amazing 14th year now. Max Verstappen has been a member of the Austrian energy drink manufacturers’ sporting line-up since last season.

“I greatly respect what Max has achieved in his young years,” says Mattias Ekström. “His abilities were obvious already in Formula 3 and he’s now confirming them in Formula One as well. I’ve been watching his career even more intensively ever since he joined the Red Bull family. That he’s interested in other motorsport categories shows that Max is a true racer. This is something we have in common.”

“The DTM is a very professional racing series with cool-looking cars and thrilling races,” Verstappen said after extensively testing the seat in Ekström’s Red Bull Audi RS 5 DTM. “Mattias is a very strong driver. As a Red Bull man, I’m happy about his success.”

But the DTM finale was not the only thing enticing the youngster to travel to Hockenheim between the two Formula One races at Sochi and Austin, as Verstappen’s girlfriend, Mikaela Åhlin-Kottulinsky, competes in the Audi Sport TT Cup. Like Mattias Ekström, the 22-year-old hails from Sweden.