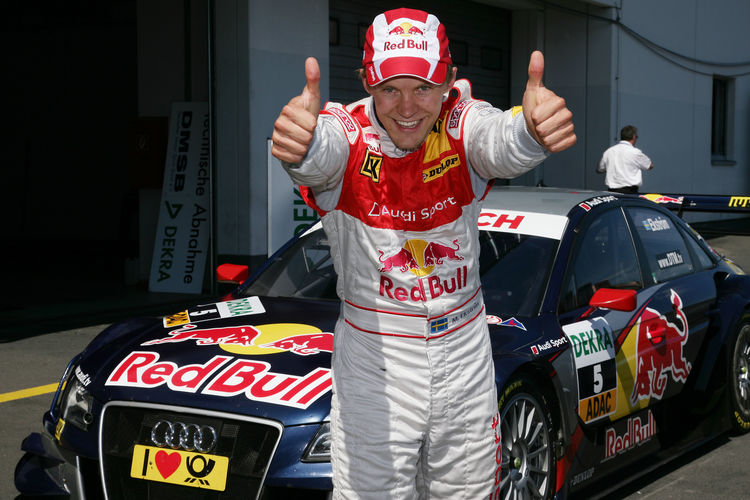 With an outstanding performance at the Nürburgring Mattias Ekström underscored his driving class and the qualities of the Audi A4 DTM: the Swede secured the pole position for the fifth DTM race of the year (live on “Das Erste” on Sunday, starting at 1:45 p.m., local time) with an advantage that is unusually large for the DTM.

In a racing series that is typically about thousandths of a second and in which the entire field most recently at the Norisring was within half a second the Audi driver was almost four tenths of a second faster in Saturday’s qualifying than the leader of the standings, Bruno Spengler. “My Audi A4 was absolutely perfect,” said the two-time DTM Champion and three-time winner of the “Race of Champions.” “If you find a good set-up at the Nürburgring, the lap time almost takes care of itself. That’s the way it was in my case today. And I’m also a little proud of myself for having managed perfect laps in both Q3 and Q4.”

Track temperatures that were significantly higher than those in the morning’s free practice made for changed track conditions in qualifying which Mattias Ekström clearly handled best. In Q3 the Swede from Audi Sport Team Abt Sportsline posted the absolutely fastest lap of the weekend at 1m 23.311s. In the crucial shoot-out for the top four grid positions he subsequently didn’t give Mercedes drivers Bruno Spengler, Jamie Green and Paul Di Resta the slightest chance.

“Mattias delivered a fantastic qualifying with two perfect laps in the two crucial sessions,” praised Head of Audi Motorsport Dr. Wolfgang Ullrich, who on the whole, though, was anything but satisfied because the second-best Audi driver, DTM rookie Miguel Molina, will merely start from position seven at the Nürburgring on Sunday. In total, only three Audi A4 DTM cars made it into the top ten of the starting grid.

“Of course ‘Eki’ is a benchmark,” said Dr. Wolfgang Ullrich. “But if one driver is able to drive so fast it stands to reason that others would have to at least come close – that wasn’t the case today. We’ve got to analyze why this happened because it’s definitely disappointing for us to have just one car at the front of the grid. This said, also want to praise Miguel Molina for his performance.”

The young Spaniard, who already clinched points twice in his first DTM season, was the second-fastest Audi driver and the best driver of a 2008-specification Audi A4 DTM in seventh place despite having spun in Q3.

Title defender Timo Scheider, Oliver Jarvis (missed Q3 by just one thousandth of a second) and last year’s winner Martin Tomczyk in their current-specification Audi A4 DTM took grid positions eight, nine and eleven. All three of them were complaining about lack of grip on the warmer track, as did the drivers of Audi Sport Teams Phoenix and Rosberg – in addition, Scheider, after having achieved second place in Q2, encountered shifting difficulties in Q3.

Qualifying was particularly disappointing for Mike Rockenfeller, who had to settle for grid position 13 after having set a best time in free practice in the morning. The Le Mans winner felt obstructed in Q2 by Mercedes driver Susie Stoddart, who was subsequently summoned to appear before the stewards.

With grid position 15, Katherine Legge equalized her best qualifying performance of the season. Alexandre Prémat and Markus Winkelhock had to settle for positions 16 and 17.