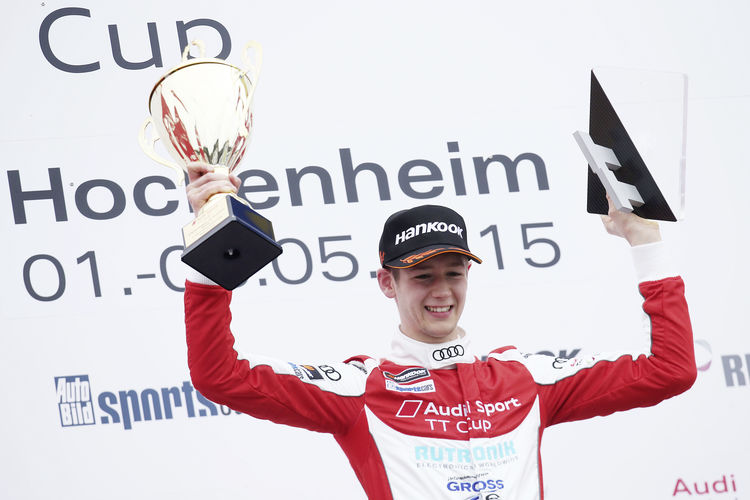 Race two of the Audi Sport TT Cup at the Hockenheimring was a humdinger. On a wet track, the crowd got to see plenty of overtaking maneuvers, two caution periods, plus a thrilling five-way battle for victory. Dennis Marschall (D) prevailed in a closely fought finale and celebrated his first victory in the cup race car.

In difficult conditions, the race of the new Audi one-make cup was initially marked by position battles and a few spins – resulting in the safety car being deployed twice. Seven laps into the race, a gripping battle ensued in which Marschall with a bold maneuver in the hairpin pushed past Nicolaj Møller Madsen (DK) and went on to defend his top spot to the checkered flag. “The whole weekend went perfectly,” said Marschall. “Third place yesterday and victory today. That’s something you can build on for the season.”

Møller Madsen had to defend himself against fierce attacks by Alexis van de Poele (B), Marc Coleselli (A) and Joonas Lappalainen (FIN) on the remaining laps. But the Dane kept the upper hand and, as in the Audi Sport TT Cup’s premiere on Saturday, finished as the runner-up. Van de Poele completed the podium in third. Marschall is now leading the drivers’ standings after two races with 43 points, closely trailed by Møller Madsen (42) and Coleselli (41).

The race weekend was the baptism of fire in a cup race car for the 18-year-old Marschall. Last year, the driver from Germany’s Baden region clinched three race victories in the  ADAC Formel Masters and at the end of the year switched from single-seater racing to the Audi Sport TT Cup. His family has a successful tradition of success in one-make cup racing. His father, Thomas Marschall, won the SEAT Leon Supercopa an amazing three times and is nicknamed ‘Mr. One-Make-Cup.’

In the guest driver duel between the two rallycross superstars Tanner Foust (USA) and Toomas Heikkinen (FIN) the American prevailed. After finishing in fifth place overall yesterday, the 41-year-old took sixth in race two, which earned him victory in the classification of the total of six guest entrants as well. Horst von Saurma (D) and Christian Gebhardt (D), two journalists with racing experience, took positions 15 and 17.